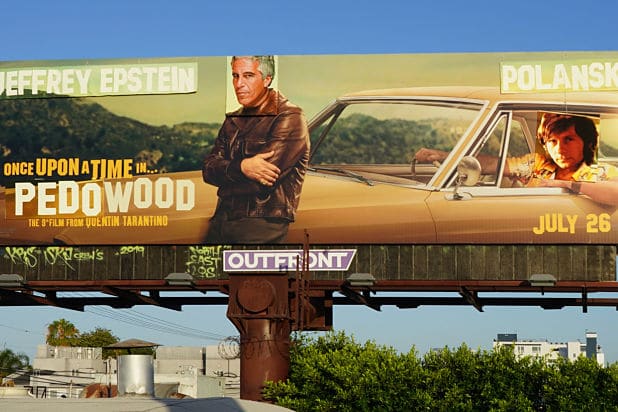 The conservative street artist taking credit for vandalizing a Los Angeles billboard and bus stop advertisement for Quentin Tarantino’s “Once Upon a Time in…Hollywood” with anti-pedophilia messaging says he himself was abused.

The new billboard, which is located at the intersection of La Cienega Blvd. and Pico Blvd., was altered ahead of the film’s Friday opening to read “Once Upon a Time in… Pedowood,” with Jeffrey Epstein’s and Roman Polanski’s faces where the film’s stars, Leonardo DiCaprio and Brad Pitt, should be.

Artist Sabo has taken credit for the alteration on his website, where he revealed he prayed before the project, which he’s never done before.  “I’ve never prayed before a project but I prayed before this one, in the names of all those children harmed by these monsters. I hope they all get caught and put behind bars,” he wrote.

Sabo told TheWrap via email, “When I pray and sadly it’s seldom I believe it should be in private. This time I knew that the issue of pedophilia meant a lot to those who were helping me and those who were supporting me. Not to mention I felt it was necessary to give a prayer out to those children who were hurt by adults who abuse them sexual. Not that I want to make an issue of it but I was sort of abused a bit by a maide [sic] and a cousin when I was 2 and 5 years old.”

At a different bus stop, Polanski’s face is replaced with that of Rep. Adam Schiff, whose district is based in Los Angeles County (his inclusion in the vandalism is in reference to a conspiracy theory that has no grounding). Another features director Woody Allen, who has faced accusations in the past, next to Epstein. He also calls the film a “Weinstein/Buck/NXIVM/Singer Production,” in reference to disgraced producer Harvey Weinstein, Democratic donor Ed Buck, sex cult NXIVM and director Bryan Singer.

“I wanted to bring around the problem of pedophilia in Hollywood both past and the present. I felt using this movie was a great vehicle to do that. I haven’t seen the story yet but I hear it includes within the story in the Tate murders executed by Charles Mason. Manson killed Polanski’s wife. Polanski is a convicted pedophile and so is Epstein. I thought they should share a billboard together to bring attention to a problem that has plagued Hollywood for decades,” Sabo said.

From simple to funny to beautiful, say happy birthday with a Hallmark card.
Whether you want to send a simple wish, share a laugh about getting older, or add beauty to their day, Hallmark has the perfect card.
Ad By Hallmark
See More

In January, Sabo defended Kevin Hart after losing his job as host of the Oscars after homophobic tweets resurfaced.

“I like Kevin Hart. Hell, I love Kevin Hart, but I was very disappointed in him when he put down President Trump earlier in the year when he told President Trump to ‘Suck it.’ […]I guess he’s just another victim of the ‘Trump Curse,’” Sabo wrote at the time.