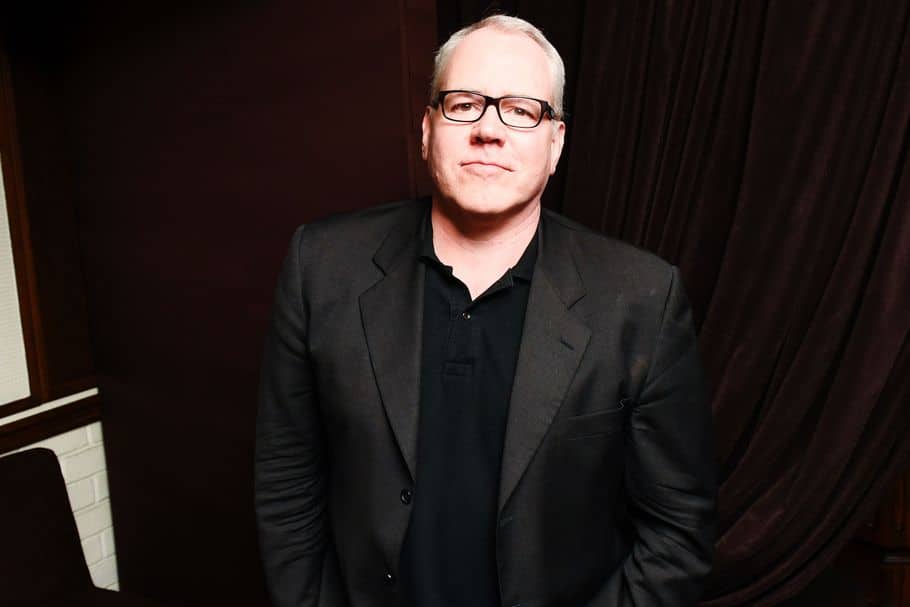 Over the past three decades, novelist Bret Easton Ellis has dealt in ultraviolence, casual nihilism and the skewering of America’s superficialities. With his last book, Imperial Bedrooms approaching its 10-year anniversary, it began to seem that Ellis was spinning his wheels. With several savagely reviewed screenwriting ventures in recent years — the 2013 Lindsay Lohan/James Deen erotic thriller The Canyons didn’t exactly set the world on fire — the Bret Easton Ellis brand might not hold as much commercial clout as it once did. However, in his 54th year, Ellis is happy. American Psycho has become a millennial touchstone and the pilot for Less Than Zero — a proposed 10-part miniseries for Hulu based on Ellis’s first book — just wrapped. With age came calm, but the man who birthed Patrick Bateman still has the ability to royally piss people off.

After decades of playing possum with his homosexuality in the media and on the page — in his 2005 semi-autobiographical novel Lunar Park, the main character is married with kids — Ellis has reached a place where his identity, politics and worldview are an open forum. The Bret Easton Ellis Podcast, which debuted in 2013 with guest Kanye West, has been a soapbox for the Literary Brat-Packer to rant about whatever is on his mind, from film and music, to pop culture and politics. This year, Ellis took the podcast to Patreon, a subscription service that charges Ellis fans $1.50 per episode, or $10 a month for a membership where users can participate in Q&As with Ellis and his guests. In a time where paid podcasts are mostly viewed as a fool’s venture, Ellis sees it as an experiment in action — albeit one that might not be working out as great as he envisioned.

Catching up with Ellis from his Beverly Hills home, we discussed fear, liberal loathing and why he’s not afraid to be culturally irrelevant.

What inspired the move to paid content?
The Patreon model is tricky, and payment is complicated. It’s not exactly what I wanted, or what I thought it was going to be when we first started. It definitely limits your audience, but on a certain level, I like how contained it is, and how it forces me to do a podcast every two weeks. I write 30- to 40-minute monologues for each show, so there is work involved. That’s why I don’t have a problem charging $1.50 per podcast. If it was just me and my friends shooting the shit, talking about whatever was on TV last night, I’d have a qualm. It’s been explained to me that people don’t pay for podcasts. It’s just something you don’t do, and that’s why there’s been a lot of pushback. My feeling is you have to take yourself out of the herd. You can’t look at yourself as average or normal. If that’s seen as inflated ego, so be it.

You’ve come under attack for your tweets in the past. Do you fear getting putting on blast for something you write or say now?
I think everyone feels muzzled now, and it comes down to how much you can take. Can I talk about what I’m feeling and say my opinion? You get to a point where there’s a break, a fissure, and you either decide to go through it and be yourself, or you decide to hide. I don’t know what kind of life it’s like to hide. I feel more comfortable expressing myself as a completely transparent man now.

Is this a boring time for you culturally?
I’m definitely more critical of it than I’ve ever been, more so than I ever was in my twenties, thirties, or forties. I don’t know if it’s a product of age, or if culture is really more uninteresting than it’s ever been. I’m still curious, and that’s the difference between me and a lot of my friends. I watch a lot of TV, and still go to the movies. I listen to music that younger people tell me to listen to. I also read books, including new fiction, and I still find things I like. That curiosity still pays off, even if there is a “been there, done that” sameness to the culture right now.

You tweeted that you were done discussing politics with liberals at dinner. Is it because everyone plays the role of knee-jerk shock and outrage?
Completely. I live with a Trump-hating, millennial socialist. I am not, as my boyfriend will tell everyone, political. I’m interested in the theater of it, how each side plays the game, and how the media has morphed with it. I have never seen liberals be more annoying than they are now. These last few weeks really were a flipping point for me, with the depression over the Supreme Court and the way the detention centers were being spun by the liberal media. It’s obviously a game. Here’s Rachel Maddow crying on TV, and pictures of Trump detention centers. My stepfather, who is a Polish Jew, had his entire family wiped out when he was an infant. Throwing around words like Nazi, Gestapo and comparisons to Weimar Germany is like, “Really guys? You’re going there?” I’ve had enough. I think there’s a reason why the #WalkAway movement is getting it’s ten seconds of fame, because there’s a real reaction toward the stridency of how Democrats are expressing their disappointment. It’s turning a lot of people off.

As a gay man, what if your right to marry is suddenly taken away? Doesn’t that anger you on a primal level?

That is suggesting that I believe in identity politics, and that I vote with my penis. It’s suggesting that immigration, the economy and other policies matter so much less than whether I can marry a man. It’s not something that I worry about, or is on my mind. That’s the problem with identity politics, and it’s what got Hillary into trouble. If you have a vagina, you had to vote for Hillary. This has seeped into a bedrock credo among a lot of people, and you’ve gotta step back. People are not one-issue voters. I am not going to vote as a gay man, and I don’t think the idea of us not being allowed to marry is going to happen. Pence has his issues, but Trump is not an anti-gay president in any way, shape or form. I also have gay friends who support and voted for Trump, based on certain policies. It’s not just about being gay and being able to marry.

Are we living in Patrick Bateman’s dream America? Trump certainly embodies the ruthless vapidity of American Psycho.
I tweeted on election night “Somewhere, Patrick Bateman is smiling.” I decided to delete it, as I didn’t know how it would be taken. I knew that something earthshaking had happened, and it made me nervous. But certainly, it is Bateman’s dream America. I had never really made that connection before now, but with you asking it, yes. Bateman adores Trump, and his idol is president. I think a lot of people have made the connection, because there were a lot of American Psycho headlines when Trump won.

Glamorama is having its 20th anniversary this year, and has proven prescient about toxic celebrity culture, the selfie generation and even the rise of global and domestic terrorism.
I began the book in 1990, and finished in 1998. With Instagram celebrities and selfie obsession, I never thought it would actually get to this point. It felt to me that we were already a celebrity-saturated culture when I was working on the book in the Nineties. This opened the door for a ridiculous kind of stardom that’s so meaningless now, and makes celebrities of the Twentieth century look like emperors and queens. It’s like static, or a constant buzz. If you pay too much attention to it, you lose sight of the main game, which is living a chill life and concentrating on the things that matter.

It’s been eight years since your last book. The Canyons was critically savaged, and The Curse of Downers Grove, based on your screenplay, barely made a blip. Is cultural irrelevance your greatest fear?

No, it’s not my greatest fear, and I’ve been pretty happily busy the last eight years. If there is a sense of cultural irrelevance hovering around me, that’s fine. You can’t make yourself culturally relevant — you have to be yourself. I’ve been around for 33 years, and I think what gives someone that kind of relevancy is being hated a little bit. I don’t think you can be a completely beloved figure for that long. There has to be some pushback on you as a person, and that’s certainly been part of my persona. My work really rubs people the wrong way, and my social persona has rubbed people the wrong way. I have to be true to myself. You can’t have a happy life otherwise, and I’m happy. I’m happier than I’ve ever been, much more than in my twenties or 30s. I don’t know why exactly, but I am.

This interview has been edited for length and clarity.