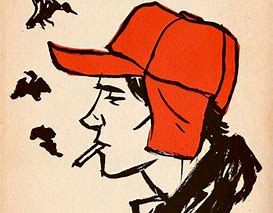 Tuesday is J.D. Salinger’s 100th birthday, but Holden Caulfield is still 17. The iconic teenager of “The Catcher in the Rye” is forever suspended in the amber of our youthful alienation.

Although a few pious schools continue to ban Salinger’s only published novel, for millions of adults, a faded copy of “The Catcher in the Rye” is a sweet teenage treasure, as transgressive as a trophy from band camp. Ninth-graders who secretly read the book with a flashlight when it came out in 1951 are now in their 80s.

To read it again as an adult is to feel Holden’s pain lingering like a phantom limb. His righteous cynicism is adolescence distilled into a sweet liquor. But the novel also feels like revisiting your first house. The familiarity is enchanting but discombobulating. The story is smaller than you remember, and some details you had completely wrong. But what’s most striking is how common the novel’s tone has become over the intervening decades. Holden is Patient Zero for generations infected by his misanthropy. We live in a world overpopulated by privileged white guys who mistake their depression for existential wisdom, their narcissism for superior vision.

Salinger himself, the legendary recluse, would fare even worse in our age of social media. “I’ve borne all the exploitation and loss of privacy I can possibly bear in a single lifetime,” he wrote to Ian Hamilton in the early 1980s, long before anybody had a Facebook account. (When Hamilton persisted with his biography, Salinger effectively crippled the book in court.) But nowadays, publishers expect writers to participate actively in the marketing process – and so do readers.

Consider that in 1961, two months after the publication of “Franny and Zooey,” Time magazine ran a 6,000-word cover story on Salinger – a publisher’s dream – but the piece included no direct quotations from the author and no recent photos. That sounds tragic in an era when writers feel compelled to Instagram every moment of their lives – from the death of a spouse to the consumption of a salad. If two hours go by without a tweet from Roxane Gay, we all start to worry. Against that standard, Salinger’s insistence on eschewing publicity feels exotic, possibly the symptom of some mental illness.

But our demand for personal access to writers isn’t the only challenge Salinger would face in today’s publishing market. In 1998, when Joyce Maynard first detailed her teenage relationship with Salinger, it was fashionable to make allowances for the abusive behavior of manipulative men, particularly if they had written popular books. (In a vile column that could have appeared in 1899, Maureen Dowd dismissed Maynard as a “Leech Woman.”) Fortunately, the #MeToo movement has shifted the parameters of what’s acceptable, as Maynard pointed out this fall in a stinging critique of the way Salinger and the press treated her.

At the moment, it’s not clear how Salinger’s reputation will evolve in the new century. As usual, time helps, e.g. we can ignore Ernest Hemingway’s behavior; we can’t ignore Sherman Alexie’s. The biographies have tended to leave two impressions: Salinger’s fiction is even more autobiographical than we thought, and Salinger himself was even loonier than we suspected. Homeopathy! Acupuncture! Dianetics! In 2013, David Shields and Shane Salerno suggested that Salinger’s undescended testicle could help explain his entire life. “Surely,” they wrote, “one of the many reasons he stayed out of the media glare was to reduce the likelihood that this information about his anatomy would emerge.” (Someone asked on Twitter, “Why didn’t he just wear pants?”)

Like the dioramas in the Natural History Museum that Holden adores, Salinger’s books never change. The author went to extraordinary lengths to prohibit adaptations or continuations of “The Catcher in the Rye,” and his heirs have honored his wishes. There are no e-book or audio versions of any of the books he published. Even an austere boxed set released this fall required his son, Matthew, to admit that his father would never have approved these modestly redesigned editions: “He’d certainly hate this centennial.”

Salinger reportedly kept writing long after he stopped publishing in 1965, which has fed rumors about unknown stories – and even a novel – awaiting exaltation. Yet almost 10 years after his death in 2010, the silence continues. The New York Public Library is planning a special exhibition of manuscripts, letters, books, and artifacts for October 2019, but no new work is expected to be revealed there.

The tomb raiders can’t be put off forever, though. The copyright on “The Catcher in the Rye” expires in 2046. Even before that, it could fall into the hands of trustees who feel less beholden to the author’s prohibitions. As one legal scholar noted, “Their emotional commitments, principles, and financial interests may diverge over time.” Indeed, large amounts of money have a way of encouraging such divergence. In 2013, a CPA in Forbes estimated that the J.D. Salinger Literary Trust could be sitting on material worth $50 million, and as Holden knows, “People are always ruining things for you.” It wouldn’t be shocking if someone eventually tried to bend the trust’s restrictions and exploit the canon’s maximum value. Then we’d finally see “Catcher in the Rye” starring Tyler Posey, “The Glass Family” series on HBO and the thrilling Broadway musical “Zooey!”

All Salinger wants on his 100th birthday is to be left alone, but that’s the only thing he still can’t have.