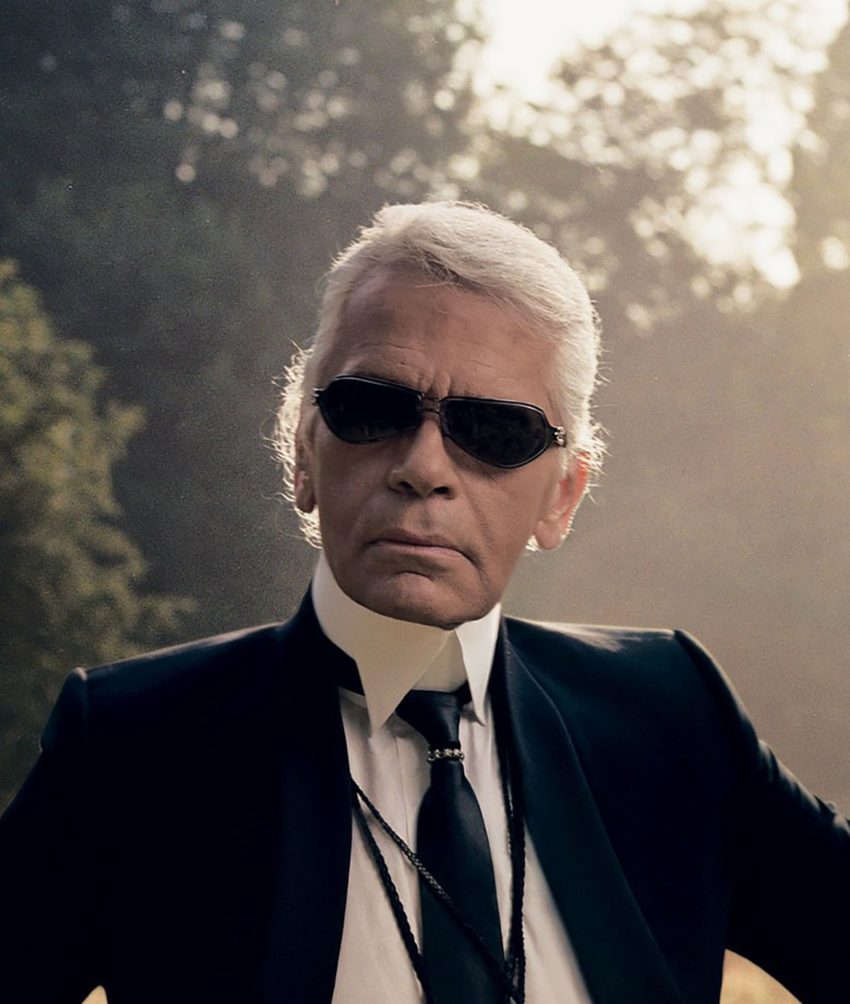 Karl Lagerfeld, one of the most prolific and widely popular designers of the 20th and 21st centuries, has died in Paris. He was 85.

Lagerfeld was creative director of Chanel, the French house founded by Gabrielle Chanel, for an era-defining, age-defying 36 years. Upon assuming the reins in 1983, Lagerfeld swiftly revived Chanel, reinterpreting the house founder’s iconic tweed skirt suits, little black dresses, and quilted handbags. He did it via the lens of hip-hop one season and California surfer chicks the next—he was a pop culture savant—without ever forgetting what the revolutionary Coco stood for: independence, freedom, and modernity.

In more recent years, as the company’s fortunes grew and grew, Lagerfeld became known for the lavish Grand Palais sets he conceived for the six Chanel collections he designed a year. There was a rocket ship, a reproduction of the Eiffel Tower, and a supermarché stocked strictly with Chanel-brand products. Florence Welch sang on the half-shell at the Spring 2012 show. Most memorable of all was the improbable giant iceberg from Scandinavia that Chanel shipped across the continent for the Fall 2010 show. Lagerfeld also pioneered the concept of the traveling pre-season show. The Karl caravan has landed variously in Versailles; West Lothian, Scotland; Dallas; Seoul; and, spectacularly, Havana, Cuba.

“What I love best in life is new starts,” Lagerfeld once said. And thank goodness. In addition to his duties for Chanel, Lagerfeld was the creative director of fur and ready-to-wear at Fendi, a position he assumed in 1965. In an era of designer musical chairs, when creative directors are given three years—or even less—to make a brand work, Lagerfeld was the éminence grise that broke the rule. The multitasking designer also designed collections under his own name, but despite his international fame, neither his eponymous collections or the ones he did for Fendi achieved the status of his work for Chanel.

Lagerfeld was the worthiest of successors. The public’s fascination with him rivals its interest in Chanel herself, who was the subject of numerous biographies, plays, and films both recent and vintage; Katharine Hepburn played her on Broadway in the 1970 musical Coco. There is no musical about Lagerfeld’s life yet, but don’t count him out. He cut an indelible figure with his omnipresent sunglasses, black leather gloves, Chrome Hearts rings, and powdered white ponytail. In the early 2000s, he shed nearly 100 pounds in order to wear the narrow-cut suits designed by Hedi Slimane for Dior Homme, and wrote a book about the process with his doctor called The Karl Lagerfeld Diet. More recent testaments to his notoriety include the public’s fascination with his Birman cat, Choupette, who is also the subject of a book and the popular Where’s Waldo? parody Where’s Karl? In the second season of A Series of Unfortunate Events, which aired in early 2018, the actor Neil Patrick Harris’s character, Count Olaf, donned a very Lagerfeldian disguise—high-collared shirt, strictly tailored jacket, ponytail wig—and went by the name of Gunther.

Karl Lagerfeld was born on September 10, 1933, in Hamburg, Germany, to Otto Lagerfeld and Elisabeth Bahlmann, though, as his peer Azzedine Alaïa was wont to do, Lagerfeld often lied about his age, as well as the occupation and background of his parents. This much is inarguable: His name has been in lights from the very earliest moments of his fashion career.

In 1954, at barely 21, Lagerfeld won the International Wool Secretariat in the coat category, sharing the stage with a man who would become his rival in fashion (and in love), Yves Saint Laurent, who won for his dress design. The recognition landed Lagerfeld a job with the couturier Pierre Balmain, where he designed for films and dressed stars including Sophia Loren, after which he became head designer at Jean Patou. In 1963, he began freelancing for Gaby Aghion at Chloé, which is widely considered to be France’s first ready-to-wear label, and took a full-time spot there in 1974, but not before he assumed the creative director job at the Roman furrier label Fendi, a post that he held until his death. His stint at Chloé paralleled the rise of designers from backroom workmen to stars worthy of the spotlight. Lagerfeld shared that spotlight with Yves Saint Laurent, who is similarly credited with introducing the concept of ready-to-wear to the world with his Rive Gauche line, launched in 1966.

In 1983, Alain Wertheimer, the co-owner of Chanel, asked Lagerfeld to breathe new life into the iconic French house, which had been in sleepy decline since Coco Chanel’s death at the age of 87 in 1971. Lagerfeld obliged in spectacular fashion. Capitalizing on the burgeoning post-modernism of the 1980s, he quoted Coco-isms with such verve his Chanel became the paragon of heritage brand revivals. He didn’t so much honor the Chanel codes as subvert and amplify them—see that Fall ’91 hip-hop collection. And he delivered the goods off the runway, too. “Fashion without wit is disastrous,” he once said, and he was rarely, if ever, without a quippy soundbite. But even as the shows became spectacles, the Chanel signature tweed suit was the canvas Lagerfeld returned to and reinterpreted again and again. The marvel of his many scores of collections is that although the silhouette changed dramatically, often from one season to the next, they all looked recognizably, archetypally Chanel.

That goes for his ready-to-wear collections, his couture, and the annual Métiers d’Art show the house stages every December—most recently Karl and co. took over the Temple of Dendur at the Met. Lagerfeld launched the Métiers d’Art concept in 2002 in order to celebrate the workmanship of the ateliers that Chanel acquired via its Paraffection subsidiary. There are 26 maisons in all, including Lesage (embroidery), Goossens (goldsmithing), Lemarié (feathers), and Maison Michel (millinery), some of which Coco Chanel herself worked with.

Longevity is Lagerfeld’s greatest achievement, but his career has been marked by countless smaller ones. At Chloé he defined the easeful look and feel of ready-to-wear, which was then a nascent category. In the 1990s, he began developing a second career as a commercial photographer, which enabled him to shoot his own advertising campaigns and portfolios for various international magazines, Vogue included. In 2004, Lagerfeld lent his imprimatur to H&M’s first designer collaboration. Labels from Comme des Garçons and Maison Margiela signed on with the Swedish fast-fashion giant in his wake, and collaborations remain the lingua franca of the fashion industry to this day. The one constant in his life was drawing; he was fashion’s most prolific and gifted sketcher. His drawings have fetched thousands of dollars at auction over the years. Recently, he’s used his prolific skills in this medium to wade into politics and social commentary, skewering the German Chancellor Angela Merkel for her immigration policies and the Hollywood producer Harvey Weinstein in the wake of his sexual misconduct scandal.

Lagerfeld’s ceaseless pursuit of the new at work—with six collections a year at Chanel, just for starters, it was a job requirement—was reflected in his homes. Museum-worthy collections of Louis XV, Art Deco, and Memphis have been amassed and summarily sold off. Before the advent of the iPhone, he was famous for owning 300 iPods, each one programmed with different music. The only collection he never de-acquisition was his “zillions” of books. His home in Biarritz was said to hold “three miles” of them. So passionate a bibliophile was Lagerfeld that in 1999 he opened a small bookshop in Paris’s seventh district, 7L, and the following year launched an imprint with the German publisher Steidl.

Lagerfeld received many accolades over the years. Nicole Kidman presented him with a Lifetime Achievement Award on behalf of the Council of Fashion Designers of America in 2002, and the British Fashion Council recognized him in 2015 with its Outstanding Achievement Award. He received France’s highest honor, commander of the Légion d’Honneur, from then-President Nicolas Sarkozy in 2010. And in 2005, Chanel was the subject of a Costume Institute exhibition that juxtaposed period pieces with Lagerfeld’s creations.

As for his successor, Lagerfeld once claimed he’d like Haider Ackermann, though he later denied it. More recently, Hedi Slimane was rumored to be launching menswear for the house, but that claim was likewise refuted. Today Chanel said that Lagerfeld’s right of hand Virginie Viard, who came out in his place at the January couture show, would take over creative work for the collections. Nonetheless, the truth of the matter is that Karl Lagerfeld is irreplaceable.