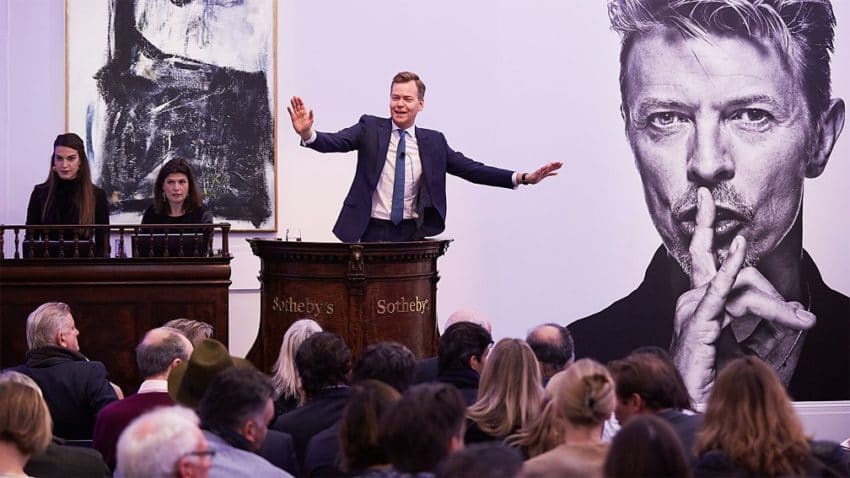 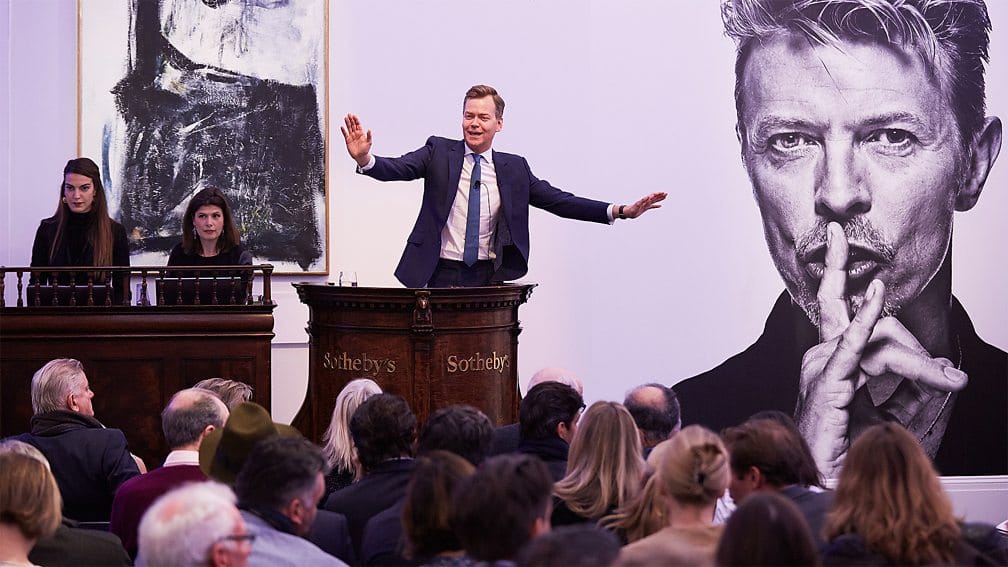 “Roger Federer can’t have a bad day on Centre Court, but in our business, you can’t have a bad half-day,” says Oliver Barker, the chairman of Sotheby’s Europe. “If you blink, you’ve missed something.”

I realised, this is absolute genius, it’s a great Banksy moment.

The stakes are high. As auction houses vie for a greater slice of market share, spectacle has increasingly triumphed over scholarship. In November 2017, after much marketing hype, Christie’s sold Leonardo da Vinci’s Salvator Mundi for an astonishing $450.3m in New York. In October 2018, the British street artist Banksy appeared to try and wrestle back control, shredding his Girl with Balloon as the canvas hammered at Sotheby’s in London for £1.042m.

Barker was on the rostrum that fateful night, describing the prank as it unfolded as “a brilliant Banksy moment”. In truth, Barker was initially caught unaware. “I’ve got to be honest, to begin with, I didn’t think it was a Banksy moment, I thought maybe it had slipped out of the frame,” he says.

“And then, of course, the alarm went off, and it was while everyone’s phones came out and there were gasps that I realized, this is an absolute genius, it’s a great Banksy moment.”

Banksy’s shredded work, retrospectively titled Love is in the Bin by the artist, on display to the public at Sotheby’s in 2018 | Getty Images

Banksy posted a video telling his side of the Love is in the Bin story on Instagram.

Barker himself has had his moments. It was while going to work on the bus that he, then a director in Sotheby’s contemporary department, spotted the potential for a deal which would result in the 2004 sale of the contents of Damien Hirst’s failed Pharmacy restaurant and bar in Notting Hill.

If Damien was punk rock, then we were very much classical music.

“I was looking out of the window and saw that the restaurant was clearly shut, there was a removals van outside, and I suddenly thought, ‘wow, that could be an amazing auction.’”

A series of breakfast meetings at the Wolseley restaurant with Hirst’s manager Frank Dunphy followed. “Damien’s initial reaction was, ‘oh God, auction houses are the Antichrist.’ If Damien was punk rock, then we were very much classical music,” Barker says.

Hirst changed his mind the morning after the 2004 Momart warehouse fire that destroyed hundreds of works by British artists, including several of Hirst’s spot and butterfly paintings. “I got a call from Frank telling me that Damien thought it was a sign; he’d got out alive and he wanted to do the sale,” Barker says.

The Pharmacy items – menus, chairs, tables, lighting, even the ashtrays – had been stored elsewhere. In a stroke of good fortune, Dunphy had picked up the rubbish dump-bound fixtures and fittings at the last minute from the restaurant’s new owners for £50,000.

The ‘white-glove’ sale – an auction in which every single lot sells – was a runaway success, racking up £11.1 million on an expected £3 million. The first lot, a pair of Martini glasses designed by Hirst, which had been estimated at £50-£70, fetched £4,000.

A preview of the Pharmacy auction at Sotheby’s, 2004 | Getty Images

“As an auctioneer, I was totally hooked,” Barker says. “For Damien, it shot him overnight into a whole different galaxy.”

As an auctioneer, I was totally hooked. For Damien, it shot him overnight into a whole different galaxy.

The highly unusual sale also paved the way for Beautiful Inside My Head Forever, Hirst’s 2008 auction, which saw the artist sell 223 new pieces straight from the studio.

The same evening, Lehman Brothers went bust, triggering an implosion of global stock markets. “It was a major risk,” Barker says. “We were all thinking whether we could pull it off.”

“I remember clearly because I had never seen her in one of our auctions before, but Bianca Jagger arrived, and she was sitting on the front row. She was looking at me, somewhat stony-faced. I could almost hear the knives being sharpened.”

The sale exceeded all expectations, fetching £111.4 million over two days, setting a record for a single-artist auction. The ballsy move, which bypassed the usual middle-men, also heralded a sea-change in the auction world, much to the chagrin of art dealers.

As Barker observes: “The biggest transformation in the auction business over the past 60 years, arguably, has been our ability to go directly to the consumers.”

Composed and quick-witted, Barker is a natural with the gavel, but the auction business was not his first choice. “My mother was in advertising and I was desperate to get into that but failed miserably,” he says with a wry smile. “My best friend’s father took me aside and said, ‘why are you pursuing advertising when clearly, art is what you’re good at and what you love?’”

Hirst ahead of the Beautiful Inside My Head Forever auction, 2008 | Getty Images

Oliver Barker conducts proceedings at the Bowie/Collector auction in London in November 2016, which was 100% sold, totaling £32.9 million | Getty Images

With that, Barker decided to return to university, studying his masters at the Courtauld Institute of Art in London. It was then he first witnessed the drama of the saleroom. “Sotheby’s was holding a Picasso ceramics sale; for the first time, I saw art and commerce together. It was a lightbulb moment,” he says.

I wasn’t so interested in dealing with only dead artists. Ultimately, I wanted to be dealing with the art of my time.

After graduating from the Courtauld, Barker gained experience in Sotheby’s impressionist and modern department–first in London and later in Paris, where he worked on the 1995 sale of the Man Ray estate.

At that time, the contemporary art market was still somewhat niche, so Barker continued to cut his teeth selling more historical pieces, working his way up from cataloguer to head of day sales in just seven years. Despite the freedom (“you could make bigger decisions and move really fast”) and bringing in £30m a year in sales, Barker sensed change was afoot.

“It was really exciting until the point I realized I wasn’t so interested in dealing with only dead artists. Ultimately, I wanted to be dealing with the art of my time,” he says.

“In the first few months, I thought I’d made a huge mistake. It was like going from the Premier League to the Conference,” says Barker, a lifelong Tottenham Hotspur fan. “If you were really lucky, you would get a Gerhard Richter once in a while or an Andy Warhol, but it was principally bad European abstract art from the 1950s and 1960s.”

And then came that Damien Hirst epiphany. Since then, post-war and contemporary art has gone on to dominate the sector. 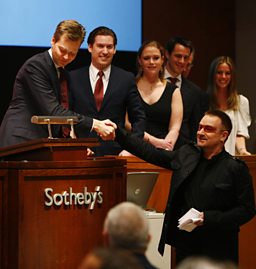 Bono shakes Barker’s hand after the 2008 auction that raised $42 million for the singer’s AIDS charity, RED. Barker became involved once Damien Hirst was on board. | Getty Images

The business of art

As Sotheby’s celebrates its 275th anniversary in 2019, the auction business looks to be more in flux than ever. A recent slew of high-profile departures from Christie’s and, to a lesser extent, Sotheby’s has raised the question of burn-out at the top, while significant growth in online sales and the proliferation of blockchain start-ups have posed other issues.

Could auctioneers be taken over by some sort of machine? Probably, yes.

Barker observes digital to be by far the biggest area of growth in the auction world, with 60% of new bidders at Sotheby’s in 2018 doing so online.

“The scale is swinging radically towards the online bidding options,” he says. One of the big online retailers such as eBay or Amazon could even challenge the traditional Christie’s and Sotheby’s duopoly, Barker suggests.

So, what are Barker’s predictions for the future? Blockchain was a buzzword in 2018, but its potential to revolutionize the art market has been hotly debated. “The train is coming, we just don’t really know what it’s going to look like in its mature form,” Barker opines.

He also raises the question of artificial intelligence (AI) following claims that a London firm hosted the first property sale to be concluded by an AI auctioneer in October. “Could auctioneers be taken over by some sort of machine? Probably, yes.

This could be a really interesting development. Even two years ago, people scoffed at the idea of self-driving cars, but now they are a reality. In terms of the art world, we’ll see.”