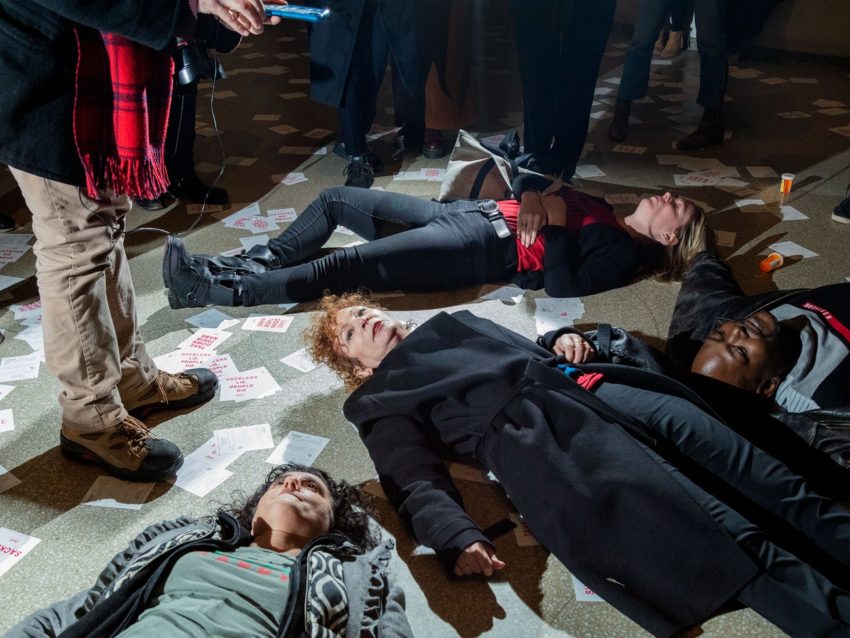 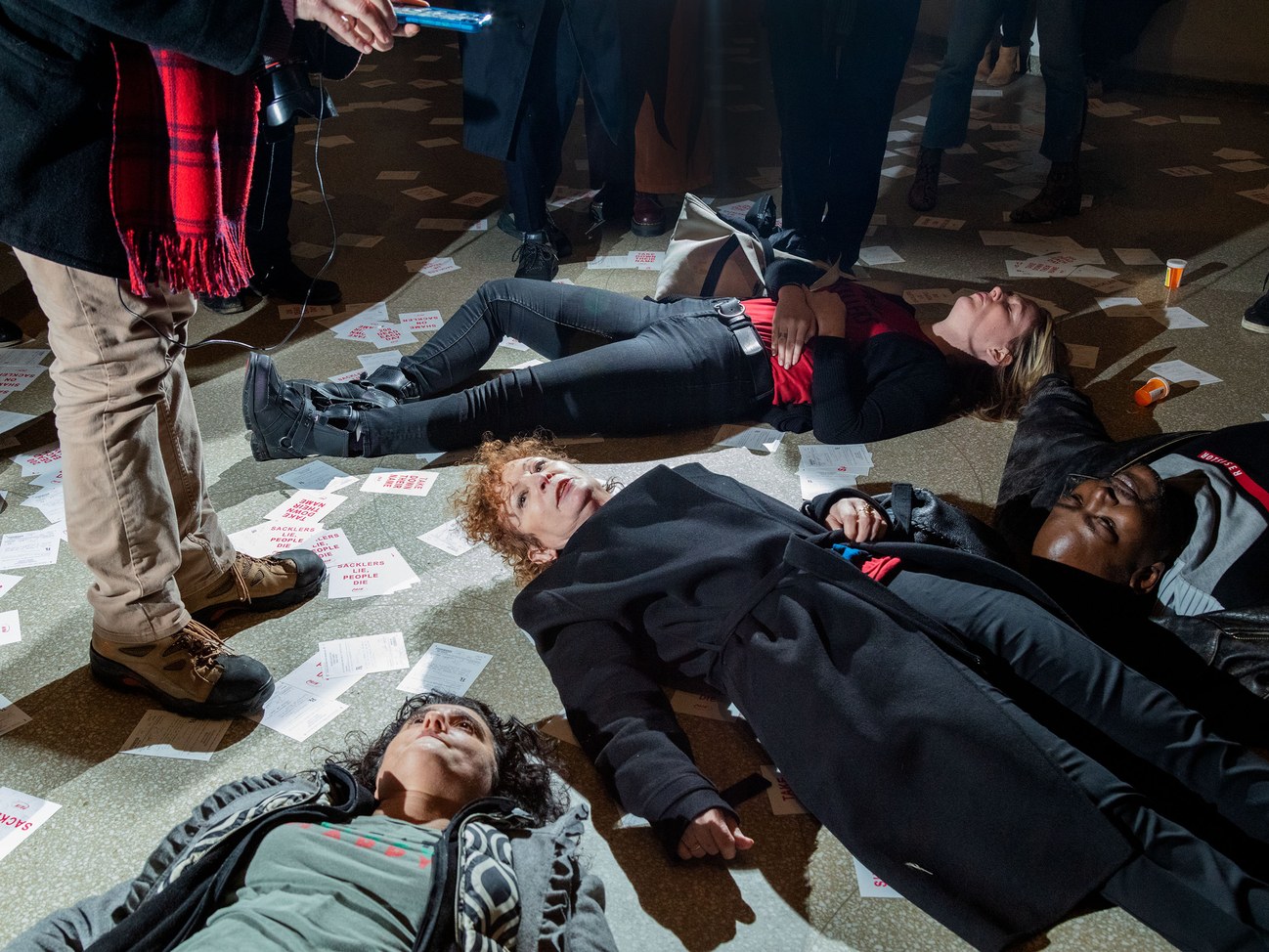 The Guggenheim Museum is crowded after five on a Saturday, when the price of admission is “pay what you wish.” Even in below-freezing weather this weekend, the ticket line snaked around the corner. People came in groups, couples, and alone. As happens in large crowds, at times the noise level rose spontaneously, as though something or someone were demanding attention, but immediately subsided. At any given time, there were people milling around in the lobby, looking at the door as though waiting for someone and up at the galleries as though planning something. Some of them were.

A bit after six, a group went up to one of the galleries. They were people of different ages, from their late teens to their sixties. They could have been New Yorkers or visitors; some of them looked like they might be artists, and some looked like they were probably students. They were all of those things. If one looked closely, similar groups of between a half-dozen and a dozen people were coalescing on all levels of the museum.

A few minutes after six-thirty, the photographer Nan Goldin appeared in the lobby. There was a flurry of hugs and hellos, and several people snapped photos. It could have been a celebrity sighting—Goldin, whose work is in the museum’s collection, is a Guggenheim type of celebrity. She stood in the middle of the lobby, visible from almost any point of the great round building. Then the noise level rose and did not subside.

Small flyers started falling, as though from the glass dome, swirling like snow as they descended the six stories. Within minutes the floor was coated in white. The sheets of paper were prescriptions, made out by a “Robert Sackler, MD,” to a Solomon R. Guggenheim, for eighty-milligram pills of OxyContin, to be taken twenty-four times a day. Each script contained a quotation: “If OxyContin is uncontrolled, it is highly likely that it will eventually be abused . . . How substantially would it improve our sales?”

The quotation came almost verbatim from a filing made last month in the Massachusetts Superior Court by that state’s attorney general. The complaint alleges that this was an exchange between the inventor of OxyContin, Robert Kaiko, who was concerned about promoting the opioid-based pain medication, and Richard Sackler, whose family owns the OxyContin manufacturer, Purdue Pharma, and who, at the time, was a senior vice-president with the company. The Massachusetts lawsuit is only the latest against the company, which back in 2007 first pleaded guilty to misleading regulators, doctors, and patients about the addictive qualities of OxyContin. The Guggenheim protest was the latest in a series staged by Goldin and her group pain (Prescription Addiction Intervention Now), which has staged actions at the Metropolitan Museum of Art, the Smithsonian, and Harvard University’s art museums, which, like the Guggenheim, accept donations from the Sackler family. The Guggenheim’s education center bears the Sackler name, as does the Metropolitan’s wing that houses the ancient Roman Temple of Dendur.

On the floor of the Guggenheim lobby appeared empty orange medicine bottles with authentic-looking labels: “Prescribed to you by the Sackler Family. OxyContin. Extremely addictive. will kill. . . . Rx# 400,000 dead.” A yellow strip up the side of the label read, “Side effect: Death.” At the same time, red banners were draped over the side of the ramp on four different levels. They read, “400,000 dead,” “shame on sackler,” “200 dead each day,” and “take down their name.” On the lobby floor, about ten people lay down to stage a die-in, amid the flyers and pill bottles.

Hundreds of visitors filled the galleries, creating a theatre in the round. Security guards did not intervene. Goldin spoke in staccato sentences, and a small group of supporters standing near her repeated each one of them in unison, insuring that the sounds carried up.

“We want their money,” Goldin said.