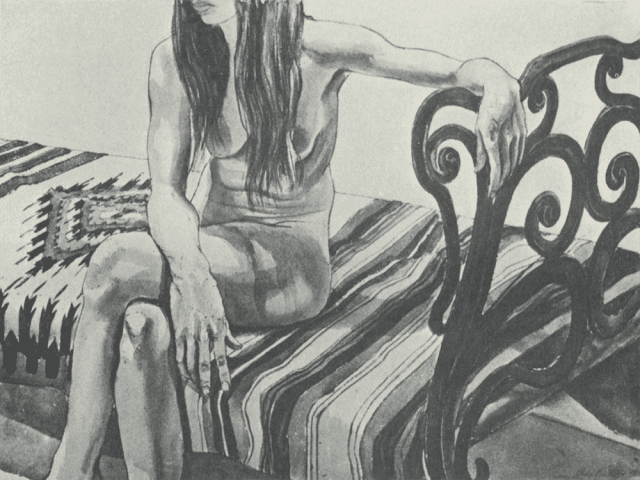 The drawings of the nude models are almost always done in the company of a small group of artist friends. We have met at one or another studio once a week, for more than twelve years (the group has changed over the years, but some of us have been constant). In looking over my drawings periodically, I select those that promise the most interesting juxtapositions of forms and shapes to base paintings on. When I start the paintings I generally forget the actual drawing and start again directly on the canvas, making radical departures, as I see new possibilities just by moving around the posed models, seeing them from other vantage points. The cropping is never planned. It results from the struggle to find the proper scale of the forms within the rectangle. I start to draw somewhere that gives me the most difficult juxtaposition of forms—usually, I start with the hands. ! draw the entire hand finger by finger, wrinkle by wrinkle, and then go on to the next form. But the first form drawn provides a module for the rest of the drawing: all successive forms are visually measured against it. I concentrate on drawing the contours of shapes, seeing them for the moment as flat areas. If I get the contours of all the shapes, including the shapes of empty spaces, correctly measured against one another, the drawing works itself out. I don’t bother with proportions, anatomical knowledge, or foreshortening. Since my basic premise is that the figures are the main forms of my compositional structures, I see the arms and legs and torsos primarily as directional movements, their contoured areas as the major shapes on my page or canvas, it doesn’t matter where they stop. That the cropping seems to echo photographic cropping is accidental. Finding the scale is the essential problem. When painting, my forms tend to grow larger as I work on them, because the brushes I use and the gestures I make take a certain amount of space to develop each wrinkle in. Painting anyway has to do with what goes on between the edges that define each form, rather than with the edges. Putting shading on the drawings, of course, is more like painting, using the drawn edgesas a scaffolding. But like most painters in the history of art, I draw the outlines first and put shading on after. In painting, one can more easily Starr with the colored areas and define the edges later. But 1 expects much more information to be carried by my painted areas when they are finally developed than I do from a drawing no matter how fully developed the drawing is.

I wish to emphasize that my involvement with the human figure as the subject grew out of the technical procedures I describe above. The meaning of the figure in its particular situation had no interest for me, I refuse to be an amateur psychoanalyst. or novelist, I would prefer to be thought of as a sort of stilled-action choreographer.

But the subject matter has brought me into conflict with the art-world establishment here in the United States. Because The Establishment here had just finished consolidating the triumph of abstract art, in 1959, and was not about to welcome the work of a realist who presumed to be competitive with abstraction. Now a decade later, and with the company of a number of other aggressively realistic artists, realism seems at least to have gained a beachhead, but my formalism again sets me against the more subject-oriented “Radical Realists” (the motorcycle, truck and horse painters and chrome luncheonette painters).

But in the process I believe I have made a contribution to humanism in 20th century painting—I rescued the human figure from its tormented, agonized condition given it by the expressionistic artists, and the cubist dissectors and distorter of the figure, and at the other extreme I have rescued it from the pornographers, and their easy exploitation of the figure for its sexual implications, I have presented the figure for itself, allowed it its own dignity as a form among other forms in nature. Perhaps it is significant that I developed my attitude during the period of political upheaval in the United States in the 1960s when the terms “seeing it as it is,” and “saying it like it is,” became radical expressions.