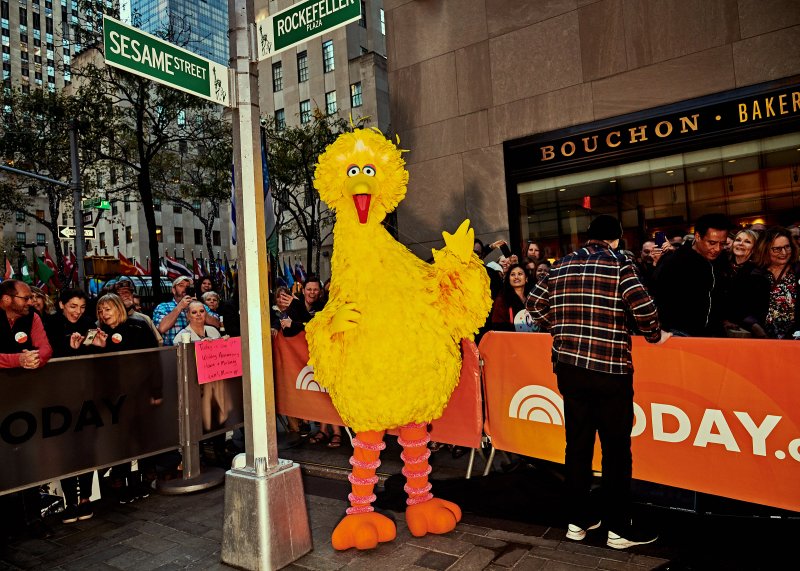 There are perks to being an 8-ft.-tall canary. Everyone recognizes you and wants to be your friend. On the other hand, our world is not built for 8-ft.-tall canaries. Inside a television studio, for example, tail feathers will brush up against camera rigs. A head that high up can get awfully close to the lighting.

So it’s a good thing the world’s most famous 8-ft.-tall canary (8 and change, actually) knows his way around a set. Big Bird, his yellow plumage bright as always, his eyes ever gentle, has spent the past 50 years on one: Sesame Street debuted on Nov. 10, 1969. Its next season kicks off Nov. 16–4,935 episodes later–and the show will celebrate the milestone with a special that airs Nov. 9 on HBO and Nov. 17 on PBS. Since it started, Sesame Street has won 193 Emmy Awards, launched thousands of products and changed early education around the world. The publicity blitz accompanying the anniversary has had the cast crossing the country on a summer road trip, lighting up the Empire State Building and, on this recent morning, appearing on NBC’s Today show.

Though a helper smooths the bird’s feathers before the camera rolls, Big Bird himself is largely unruffled by the fuss. It’s not just that the fame isn’t new to him, though that’s certainly the case–he appeared on the cover of TIME in 1970, as the show marked its first birthday; led the 1985 movie Follow That Bird; has a star on the Hollywood Walk of Fame; and appeared with Bob Hope in the first U.S. television special ever filmed in China. More to the point, it’s hard to be excited about a 50th anniversary when you have trouble counting that high. “It’s really hard to understand numbers like that,” Big Bird told TIME between shooting Today segments. “That must be really, really, really old.”

It is, to a child. And therein lies a paradox of Big Bird: he has been 6½ years old for half a century. So to interview Big Bird is an odd, irresistible proposition. It only begins with the imagination required of any human addressing a Muppet. This one remembers things that happened decades ago, even as he has remained the child to whom his friends in the neighborhood and out there in TV land can relate. Meanwhile, the human adults who live alongside the monsters of Sesame Street have aged, and many of the children who watched the early years of Sesame have grown kids of their own.

When he sees them out in the world, Big Bird says, “they say things like, ‘I grew up playing with you’–and that makes me feel good. But I never thought about the other thing, about them growing up, like really growing up. I kind of see we’re all growing up together.”

The kids he meets today are pretty much the same as the kids he met in the past. The stuff they want to talk about is essentially the same, the feelings they feel are the same, and the qualities that made Big Bird so beloved–kindness, friendliness, open-mindedness–are as valuable as ever.

“I think all the kids I’ve met, they’ve always just been friendly and kind,” he says. “They’re looking for a friend, for somebody to play with. I think kids have been like that for all the time I’ve known them, for all my 6½ years.”

Of course, some things have changed in 50 years. The Vietnam War ended. The Berlin Wall fell. The first email was sent. When Today staffers–who you’d think would be used to all this–snap pictures of Big Bird out on Rockefeller Plaza, their cameras are iPhones. Big Bird has changed too. Caroll Spinney, the veteran puppeteer who originated Big Bird, retired in October 2018 at 84; his final recorded voice segments will air in the new season. Matt Vogel, 49, who began apprenticing with Spinney in 1996, has taken over the role.