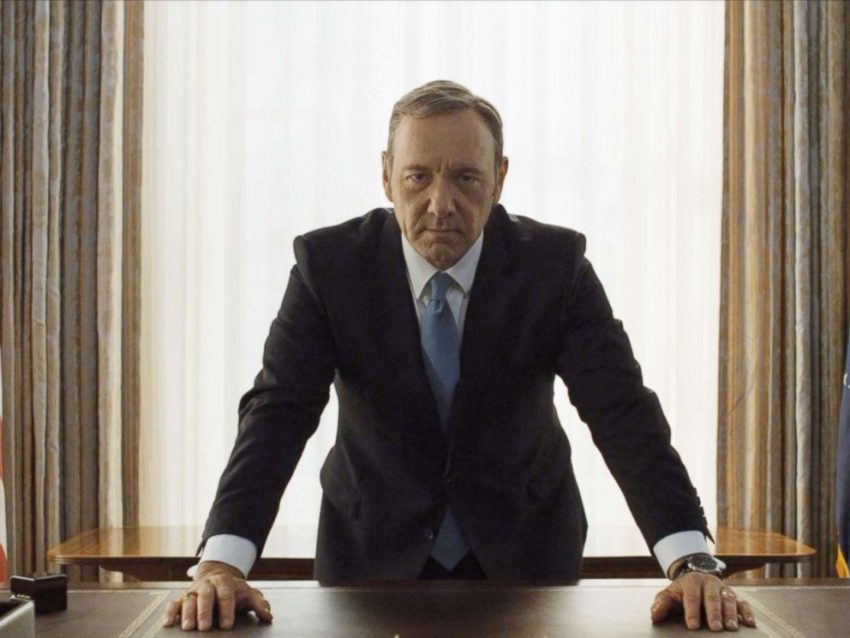 From his first star turn in 1986 on Broadway opposite Jack Lemmon in Eugene O’Neill’s theatrical tour de force, “A Long Day’s Journey into Night” through the spring 2017 release of the fifth season of “House of Cards” — the actor left an indelible mark on stage, screen and cinema.

Widely hailed as one of the finest actors of his generation, Spacey won a Tony Award for his 1991 role in Neil Simon’s “Lost in Yonkers,” and a Best Supporting Actor Academy Award for a sublime performance in 1995’s “The Usual Suspects.”

His 1999 depiction in “American Beauty” of a suburban ad executive infatuated with his teen daughter’s best friend — played by actress Mena Suvari — won him the Oscar for Best Actor.

In 2004, Spacey was named to one of the most prestigious posts in the London theater world — artistic director of the Old Vic, the iconic non-profit theatrical institution and performance space — a position he held for 11 years.

Then came “House of Cards,” a cultural blockbuster that made Netflix the first streaming service ever nominated for — and ultimately awarded — Prime-time Emmys, Golden Globes and Academy Awards and ushered in a revolution in high-quality, streaming original series.

Netflix reported total subscribers at just under 31 million in the fourth quarter of 2012, just before the show debuted. Within three years, that figure had more than doubled, and has more than doubled again since 2015, according to a public summary of quarterly reports.

For five seasons, Spacey — and his exquisitely evil character Frank Underwood — were the toast of Washington, D.C, being playfully warned along with actress Robin Wright — who played first lady Claire Underwood — by the real president of the United States “no spoilers.”

But in the fall of 2017, Spacey’s career came crashing down with devastating swiftness and near Shakespearean consequences.

Here is a timeline of how it happened:

Oct. 5, 2017: The New York Times publishes a bombshell investigation alleging that Los Angeles movie mogul Harvey Weinstein had been sexually assaulting women in the film industry and paying them off to buy their silence for decades. The investigation documented at least eight settlements Weinstein reached with women he had allegedly sexually assaulted and included accounts of high-profile actresses like Ashley Judd who said they were victimized by Weinstein. Others said their careers were sidelined after rebuffing Weinstein’s alleged sexual advances. Weinstein has denied ever sexually assaulting anyone.

Oct. 29, 2017: “Star Trek: Discovery” actor Anthony Rapp alleges in an interview with Buzzfeed News that in 1986, when he was 14, a then-26-year-old Spacey climbed on top of him in a bed after a party and made a sexual advance. He has said he contacted the website’s reporter after being inspired by the Weinstein revelations.

Oct. 30, 2017: Spacey posts a statement on Twitter the next day saying he is “beyond horrified” by the story but did not remember the alleged incident. He also apologized for “what would have been deeply inappropriate drunken behavior.”

But with the second half of his statement, Spacey sparks a fresh controversy when he comes out of the closet as a gay man in response to Rapp’s accusation, prompting a torrent of accusations from the LGBTQ community for conflating alleged pedophilia with homosexuality.

The same day, actor Roberto Cavazos claims in a post on his Facebook account that he had a “couple of unpleasant encounters” with Spacey when the two were both performing at the Old Vic, including allegedly being squeezed by Spacey in the Old Vic bar.

Theater officials told The Guardian newspaper at the time that they had never before received sexual misconduct complaints against Spacey. They set up a confidential reporting process for complaints about Spacey.

Nov. 8, 2017: Former ABC Boston affiliate WCVB anchor Heather Unruh holds a press conference in which she accuses Spacey of groping her son at a Nantucket bar in 2016, after she had hinted at her allegations in an Oct. 13 tweet. The alleged victim himself has never spoken publicly about the alleged incident with Spacey.

Montana apparently never filed a police report, telling the Los Angeles Times that “I’m not going after Kevin for money. I don’t wish him any ill will. It’s just… he did something 14 years ago that’s affecting not only him but all the people who work on that show.”

In apparent response to Montana’s initial allegations to Radar Online a week earlier, a representative for Spacey told the Los Angeles Times that the actor “is taking the time necessary to seek evaluation and treatment. No other information is available at this time.”

Nov. 16, 2017: At least 20 young men over the age of 18 came forward at the London theater the Old Vic to report alleged sexual misconduct by Spacey. It was a confidential process that guaranteed their anonymity, according to a statement from officials at the Old Vic, where Spacey was artistic director from 2004 to 2015.

In the statement, the officials reveal the results of an investigation conducted by a law firm at the theater’s request, which found the alleged incidents occurred between 1995 and 2013, with all but two occurring prior to 2009.

The allegations include “a range of inappropriate behavior,” from actions that made people feel uncomfortable to “sexually inappropriate” touching. The Associated Press reported that officials at the Old Vic said they had encouraged 14 of the complainants to go to police, but couldn’t confirm whether any had done so.

Richard Miskella, a partner at Lewis Silkin who led the investigation, told the AP that the firm invited Spacey to participate in its inquiries “and he didn’t respond.”

Dec. 4, 2017: Producers of “House of Cards” announce that production will resume without Spacey.

April 11, 2018: The Los Angeles District Attorney’s office announces that it is investigating a sexual assault allegation against Spacey from 1992.

April 26, 2018: Bill Cosby is convicted on three felony counts of aggravated indecent assault stemming from the drugging and molesting of a woman at his suburban Philadelphia home 14 years earlier.

Aug. 22, 2018: The Los Angeles District Attorney’s office announces that its prosecutors are investigating a second sexual assault allegation against Spacey from 2016 in Malibu.

Sept. 4, 2018: The Los Angeles District Attorney’s office announces that Spacey will not face charges in relation to allegations made in April 2018 of a 1992 alleged sex assault, citing the statute of limitations. Spacey has not directly addressed the 1992 publicly. He earlier claimed to have no recollection of Rapp’s allegations, but has since issued an “absolute” denial of the other allegations that later emerged, according to the Los Angeles Times.

Sept. 5, 2018: The fate of Spacey’s character Frank Underwood is revealed in a much buzzed-about “House of Cards” trailer.

Sept. 27, 2018: Spacey is sued civilly by a masseuse who claims the actor sexually assaulted him during a session in Malibu in October 2016, according to court records. Spacey’s attorneys have claimed that the encounter was consensual.

Dec. 24, 2018: Spacey is charged with indecent assault stemming from an alleged incident with a teenager on Nantucket Island, Massachusetts, during the summer of 2016 .

The same day, Spacey posts a three-minute YouTube video of himself on his verified Twitter account, speaking in the voice of his former character on “House of Card,” Frank Underwood. The video is titled, “Let Me Be Frank.”

“I shocked you with my honesty, but mostly I challenged you and made you think. And you trusted me even though you knew you shouldn’t,” Spacey, wearing an apron with Santa Claus figures on it, said in the video. “So we’re not done no matter what anyone says. Besides I know what you want, you want me back.”

Spacey goes on to ask the viewer, “But you wouldn’t believe the worst without evidence, would you? You wouldn’t rush to judgment without facts, would you? Did you? No, not you. You’re smarter than that. Of course they’re going to say I’m being disrespectful, not playing by the rules, like I ever played by anyone’s rules before. I never did and you loved it.”

Jan. 7, 2019: Spacey is arraigned in a Nantucket courtroom on a sex assault charge for the alleged incident with Unruh’s son. Spacey pleaded not guilty to the charge through an attorney.

May 30, 2019: Among a series of rulings on motions in the case, Nantucket District Court Judge Thomas Barrett granted access by Spacey’s attorneys to six months of the alleged victim’s text messages following the alleged incident, and the surveillance video from the Club Car from 5 p.m. July 7, 2016, to 3 a.m. July 8, according to court records. Barrett also denied a defense request for the text messages of Unruh herself during the same time period.

May 31, 2019: Defense attorneys for Spacey charge in a new court filing that the accuser deleted exculpatory text messages from the time surrounding his encounter with Spacey before turning over screenshots of text exchanges to the police — and charged that the district attorney’s office knew this and “hid” it from the defense until now.

“Clearly, [the accuser] has gone to great lengths to remove text messages that he believes did not fit his narrative,” defense attorney Alan Jackson wrote in the filing. “The prosecution is aware of this and hid that information from the defense.”

A spokeswoman for the district attorney’s office told ABC News in response that prosecutors were actually still waiting for a signed protective order from the defense before turning over the evidence. The statement did not address the claim that Spacey’s accuser deleted exculpatory texts. Prosecutors were expected to address the dispute in a June 3 pre-trial hearing.