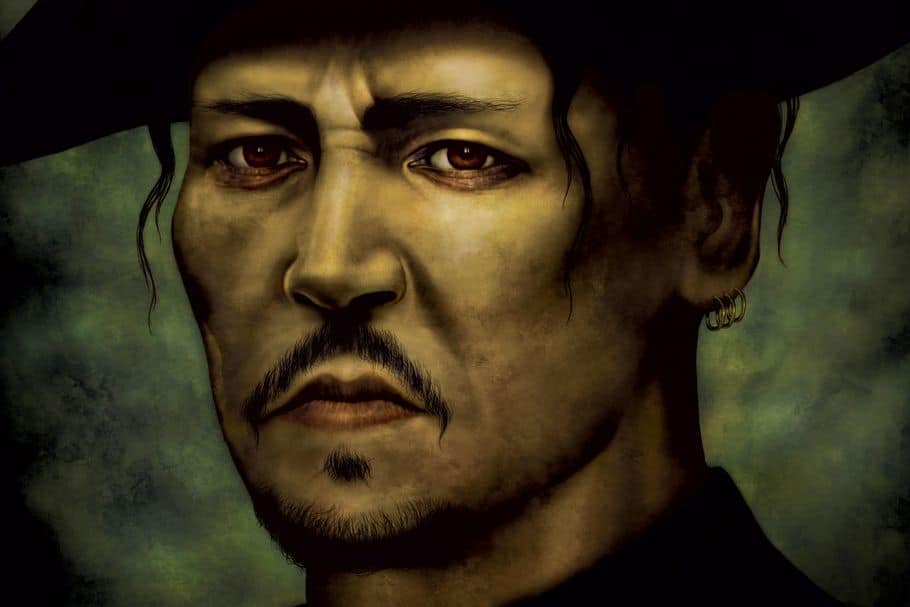 Johnny Depp isn’t here yet. Still, his presence is all around the 10,500-square-foot rented mansion at 16 Bishopswood Road in London’s Highgate neighborhood.

He is here in the busy hands of Russell, his personal chef working up the Peking duck. He is here in the stogie-size joint left by the sink in the guest bathroom. He is here in the never-ending reservoir of wine that is poured into goblets. And he is here in a half-done painting upstairs that features a burning black house, a child Johnny and an angry woman who resembles his mother, Betty Sue.

Depp has come from a photo shoot for the Hollywood Vampires, his sometime band that features Alice Cooper and Joe Perry. Trailing behind is his lawyer Adam Waldman. Depp is dressed like a Forties gangster, jet-black hair slicked back, pinstripes, suspenders and spats. His face is puffy, but Depp still possesses the fixating brown eyes that have toggled between dreamy and menacing during his 35-year career. Now, Depp’s studious leer is reminiscent of late-era Marlon Brando. This isn’t a coincidence, since Depp has long built his life by imitating his legends – buying an island like Brando, becoming an expert on quaaludes like Hunter S. Thompson.

He reaches out a right hand whose fingers recently had their tats changed from “slim” – a reference to his ex-wife Amber Heard – to “scum.”

“So are you here to hear the truth?” asks Depp as Russell brings him a glass of vintage red wine. “It’s full of betrayal.”

We move to the dining room for a three-course meal of pad thai, duck and gingerbread with berries. Depp sits at the head of the table and motions toward some rolling papers and two equal piles of tobacco and hash, and asks if I mind. I don’t. He pauses for a second. “Well, let’s drink some wine first.”

It had taken a month and almost 200 e-mails for the message to become clear: Come to London; Johnny Depp wants to bare his soul about his empty bank accounts.

It’s estimated that Depp has made $650 million on films that netted $3.6 billion. Almost all of it is gone. He’s suing The Management Group, run by his longtime business manager, Joel Mandel, and his brother Robert for negligence, breach of fiduciary duty and fraud. The suit cites, among other things, that under TMG’s watch Depp’s sister Christi was given $7 million and his assistant, Nathan Holmes, $750,000, without his knowledge, and that he has paid the IRS more than $5.6 million in late fees. (Most of the ire is directed toward Joel, who had day-to-day responsibility for Depp’s account.) There are additional charges of conflict of interest, saying that TMG invested Depp’s money for its own purposes and returned it without profit. The suit seeks more than $25 million from TMG, accounting for “tens of millions” it claims TMG illegally took for its commission, plus any additional damages the court sees fit.

The Mandels categorically deny all wrongdoing and are countersuing, alleging that Depp breached his oral contract with the company. The suit suggests that Depp has a $2-million-a-month compulsory-spending disorder, offering bons mots like “Wine is not an investment if you drink it as soon as you buy it.” Depp was continuing to “concoct malicious and false allegations” against the company, according to TMG’s countersuit, because TMG had filed a private foreclosure notice on one of Depp’s properties, claiming Depp owes TMG $4.2 million in unpaid loans.

Over the past 18 months, there has been little but bad news for Depp. In addition to the financial woes, there were reports he couldn’t remember his lines and had to have them fed to him through an earpiece. He had split from his longtime lawyer and agent. And he was alone. His tabloid-scarred divorce from actress Heard is complete, but not before there were persuasive allegations of physical abuse that Depp vehemently denies. Depp’s inner circle had begged him to not wed Heard or to at least obtain a prenup. Depp ignored his loved ones’ advice. And there were whispers that Depp’s recreational drug and alcohol use were crippling him.

During my London visit, Depp is alternately hilarious, sly and incoherent. The days begin after dark and run until first light. There is a scared, hunted look about him. Despite grand talks about hitting the town, we never leave the house. As Depp’s mind leads us down various rabbit holes, I often think of a line that he recited as the Mad Hatter in Alice in Wonderland: “Have I gone mad?”

His closest confidant seems to be Waldman, a lawyer he met less than two years ago. Waldman, 49, possesses an unlined face, sandy hair, a designer black leather jacket and a soothing voice that could make the bird-flu epidemic sound reasonable. He tells me he is married to the “world’s number-one face doctor.”

Depp seems oblivious to any personal complicity in his current predicament. Waldman seems to have convinced Depp that they are freedom fighters taking on the Hollywood machine rather than scavengers squabbling over the scraps of a fortune squandered.

One day, Depp shows me his artwork, and it strikes me that Depp is now a worn Dorian Gray. “I imagine Johnny doing a version of Jack Sparrow at 70, at 80,” his friend Penélope Cruz tells me. “It will be as charming and as great.” But the things that were charming when he was 28 – doing drugs and running around the scaffolding on a high floor of Atlantic Records’ L.A. building – seem disturbing at 55. (Cruz ends our conversation by telling me about Depp trying to pull his own tooth at a London restaurant while having dinner with her and Stella McCartney.)

Maybe being a permanent Peter Pan is the key to Depp’s onscreen charm. But time has passed. Boyish insouciance has slowly morphed into an aging man-child, still charismatic but only in glimpses. If his current life isn’t a perfect copy of Elvis Presley’s last days, it is a decent facsimile.

Depp goes quiet, perhaps realizing the sadness of what he has just said. He wipes his eyes. “I loved him,” he says.

The two shared more in common than an addiction to nicotine. They both arrived in L.A. whiskey tango from Florida, intent on making it as rockers (perfectly played by Depp in the video for Petty’s “Into the Great Wide Open”). Depp changed course after an L.A. drinking buddy named Nicolas Cage told him there was money to make in acting. He eventually starred in his breakout role as a high school narc on 21 Jump Street in 1987.

We sit down for dinner, and I ask if he remembers the first big purchase he made when he started making money. He rolls another joint that he first passes to me and then to Waldman. He wants me to know it wasn’t a Ferrari, but a house for his mama.

“My mom was born in a fucking holler in eastern Kentucky,” says Depp. “Her poor fucking ass was on phenobarbital at 12.”

Depp grew up the youngest of four, raised mostly by his mother, Betty Sue. His father was a civil engineer, but largely absent. They lived first in Kentucky and then Florida, moving, according to Depp, more than 40 times. His mom hurled things, but she was still his mom. “Yeah, there were irrational beatings,” says Depp. “Maybe it’s an ashtray coming your way. Maybe you’re gonna get clunked with the phone.” Depp pauses. “It was a ghost house – no one talked. I don’t think there ever was a way I thought about people, especially women, other than ‘I can fix them.’ ”

Mostly, Depp remembers his mother coming home from double shifts at her waitressing job; he would rub her feet as she counted out the coins from her tips. He bought her a small horse farm outside of Lexington, Kentucky, with one of his first big paydays.

“Betty Sue, I worshiped her,” says Depp, but his smile quickly fades. “She could be a real bitch on wheels.” He tells me what he said at her 2016 funeral: “My mom was maybe the meanest human being I have ever met in my life.”

After buying the house for his mom, Depp treated himself to a 1940 Harley-Davidson, which he still owns. From 1986 to 2006, he made 32 movies, showing a once-in-a-generation range from Edward Scissorhands – beginning a lifelong collaboration with director Tim Burton – to an acclaimed portrayal of an undercover cop in Donnie Brasco.

Depp acquired a taste for the grandiose life along the way. He bought the Viper Room in the early 1990s, an old speakeasy once frequented by Bugsy Siegel, and turned it into a small rock club where everyone from Guns N’ Roses to Johnny Cash played. He suffered through the death of his friend River Phoenix from an overdose at the club, amid wild claims in the supermarket rags that he’d delivered the fatal dose to Phoenix himself. “Imagine living with that,” says Depp, his eyes clouding over.

He chafed against playing the standard, dashing Hollywood hero. An adviser yelled at him when he took the title role in Ed Wood.

A constant in Depp’s business was his older sister Christi, who managed his day-to-day affairs. (She never responded to requests for comment for this story.) In 1999, they realized that his current management company couldn’t handle his rapidly expanding financial affairs and they needed to move to a bigger firm. By then, Depp had moved above Sunset Boulevard to an 8,000-square-foot estate nicknamed “Dracula’s Castle.” He spent a day interviewing financial managers. His last meeting, he says, was with Robert and Joel Mandel, brothers who ran TMG. Depp says he immediately took a shine to Joel, the youngest child of an Auschwitz survivor. Depp saw a kindred spirit. “He was a nervous wreck,” says Depp. “He was pouring sweat. He was broken.” (TMG disputes this portrayal).

I ask him why he would place his money in the hands of a person he would describe as a “broken toy.” Depp says because he felt a kinship: “The monofilament that goes through all my characters, if you really look, they’re all fuckups. They’re broken.”

I try to probe deeper, but Depp is restless. The mansion is spookily quiet. It’s now three or four o’clock in the morning, and his cook and security guards have all retired. Despite the hour, Depp’s mind is a space-ball ricochet, moving through a random series of flashcards of his life. There was an incident last year at the Glastonbury Festival, where he asked, perhaps drunkenly, “Can we bring Trump here? . . . When was the last time an actor assassinated a president?” Depp was roasted in the press. “I was trying to connect it to Trump saying he could shoot someone on Fifth Avenue, but it didn’t come out right,” says Depp with a shrug.

He moves to the couches in the living room and flips on the television. Depp has an affinity bordering on obsession with the bons vivants who had their late prime in the 1970s, whether it is Marlon Brando, Hunter S. Thompson or Don Rickles. “Rickles was the bravest comedian ever,” says Depp. “He’d say anything.” As proof, he finds a video of Rickles on a Dean Martin celebrity roast, turning to boxer Sugar Ray Robinson: “I want to thank Sugar Ray Robinson, who said to Rocky Graziano, ‘Hey, baby, you’re hurting me.’ Sugar Ray is a great champion. Sugar, we would ask you to talk, but you know the blacks, your lips lock.”