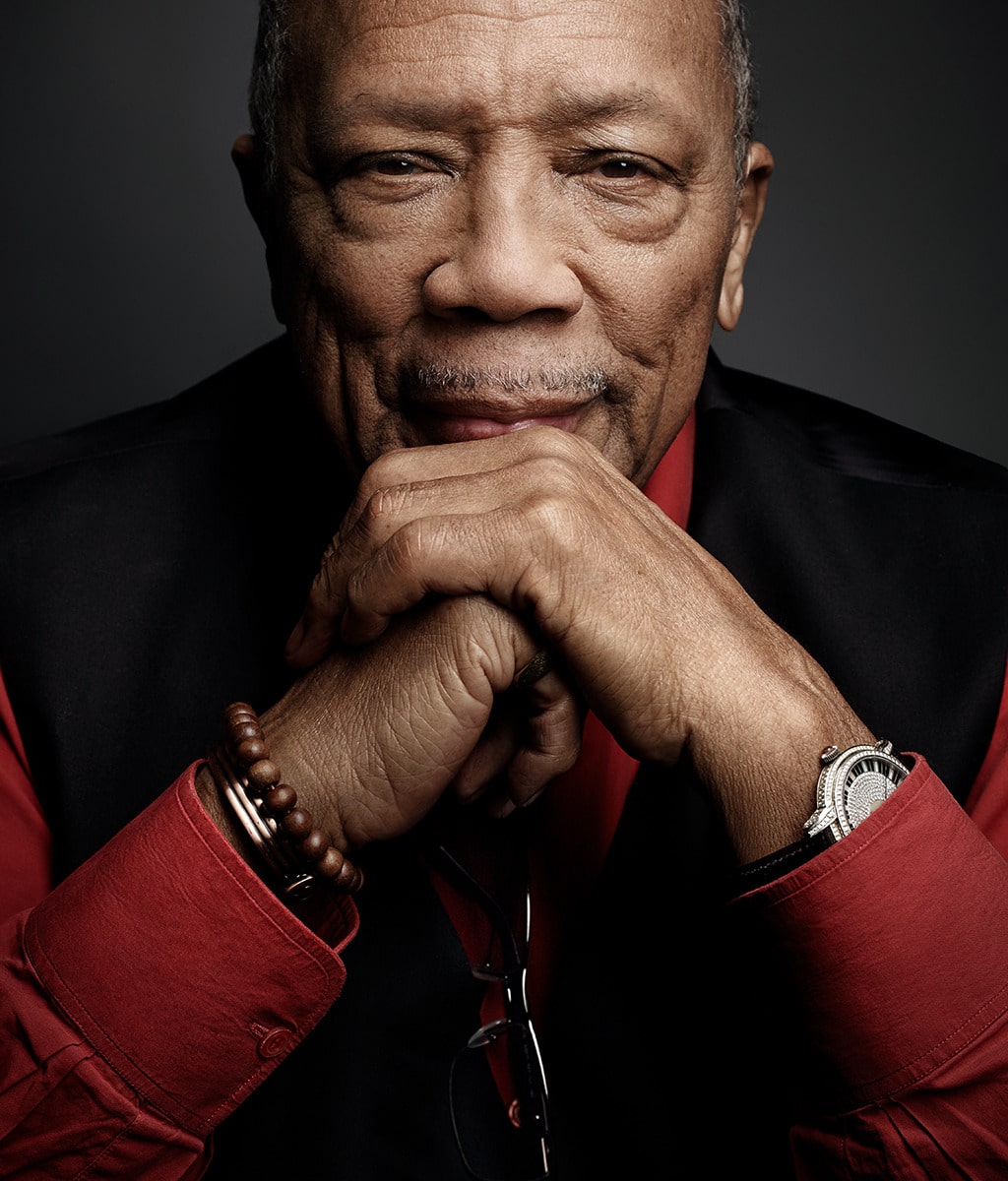 In both music and manner, Quincy Jones has always registered — from afar, anyway — as smooth, sophisticated, and impeccably well-connected. (That’s what earning 28 Grammy awards and co-producing Michael Jackson’s biggest-selling albums will do.) But in person, the 84-year-old music-industry macher is far spikier and more complicated. “All I’ve ever done is tell the truth,” says Jones, seated on a couch in his palatial Bel Air home, and about to dish some outrageous gossip. “I’ve got nothing to be scared of, man.”

Currently in the midst of an extended victory lap ahead of his turning 85 in March — a Netflix documentary and a CBS special hosted by Oprah Winfrey are on the horizon — Jones, dressed in a loose sweater, dark slacks, and a jaunty scarf, talks like he has nothing to lose. He name-drops, he scolds, he praises, and he tells (and retells) stories about his very famous friends. Even when his words are harsh, he says them with an enveloping charm, frequently leaning over for fist bumps and to tap me on the knee. “The experiences I’ve had!” he says, shaking his head in wonder. “You almost can’t believe it.”

You worked with Michael Jackson more than anyone he wasn’t related to. What’s something people don’t understand about him?
I hate to get into this publicly, but Michael stole a lot of stuff. He stole a lot of songs. [Donna Summer’s] “State of IndependenceOriginally written by Vangelis and longtime Yes front man Jon Anderson, “State of Independence” was recorded by Donna Summer in 1982. Jones produced Summer’s version, Michael Jackson helped out on backing vocals, and the song’s central riff does sound awfully similar (albeit faster) to the iconic bass riff on Jackson’s hit single “Billie Jean.” It should also be noted that, last year, Jones won a lawsuit over a royalties dispute against Jackson’s estate.” and “Billie Jean.” The notes don’t lie, man. He was as Machiavellian as they come.

What about outside of music? What’s misunderstood about Michael?

I used to kill him about the plastic surgery, man. He’d always justify it and say it was because of some disease he had. Bullshit.

How much were his problems wrapped up with fame?
You mean with the way he looked? He had a problem with his looks because his father told him he was ugly and abused himJackson described being abused by his father Joe in a 1993 interview with Oprah, as well as in a 2003 interview with Martin Bashir. “It was really bad,” he recalled during the latter.. What do you expect?

It’s such a strange juxtaposition — how Michael’s music was so joyous, but his life just seems sadder and more odd as time goes by.
Yes, but at the end Michael’s problem was PropofolIn 2009, not long after Jackson’s death, the Los Angeles County coroner announced that the singer’s death was caused by “acute propofol intoxication.” Jackson’s doctor, Conrad Murray, had been prescribing the powerful sedative, which Jackson called his “milk,” to help with the singer’s insomnia. In 2011, Murray was found guilty of involuntary manslaughter in Jackson’s death., and that problem affects everyone — doesn’t matter if you’re famous. Big Pharma making OxyContin and all that shit is a serious thing. I was around the White House for eight years with the Clintons, and I’d learn about how much influence Big Pharma has. It’s no joke. What’s your sign, man?

You just mentioned the Clintons, who are friends of yours. Why is there still such visceral dislike of them? What are other people not seeing in Hillary, for example, that you see?
It’s because there’s a side of her — when you keep secrets, they backfire.

Like what secrets?
This is something else I shouldn’t be talking about.

You sure seem to know a lot.
I know too much, man.

What’s something you wish you didn’t know?
Who killed Kennedy.

Who did it?
[Chicago mobster Sam] GiancanaChicago gangster Sam Giancana is a well-known name among Kennedy conspiracists, both for his alleged help in delivering Illinois votes for Kennedy in the 1960 presidential election and the 1963 assassination of the president. The latter theory largely stems from Giancana’s murder in 1975, not long before he was supposed to testify before a Senate committee investigating collusion between the mob and the CIA.. The connection was there between Sinatra and the Mafia and Kennedy. Joe Kennedy — he was a bad man — he came to Frank to have him talk to Giancana about getting votes.

I’ve heard this theory before, that the mob helped win Illinois for Kennedy in 1960.
We shouldn’t talk about this publicly. Where you from?