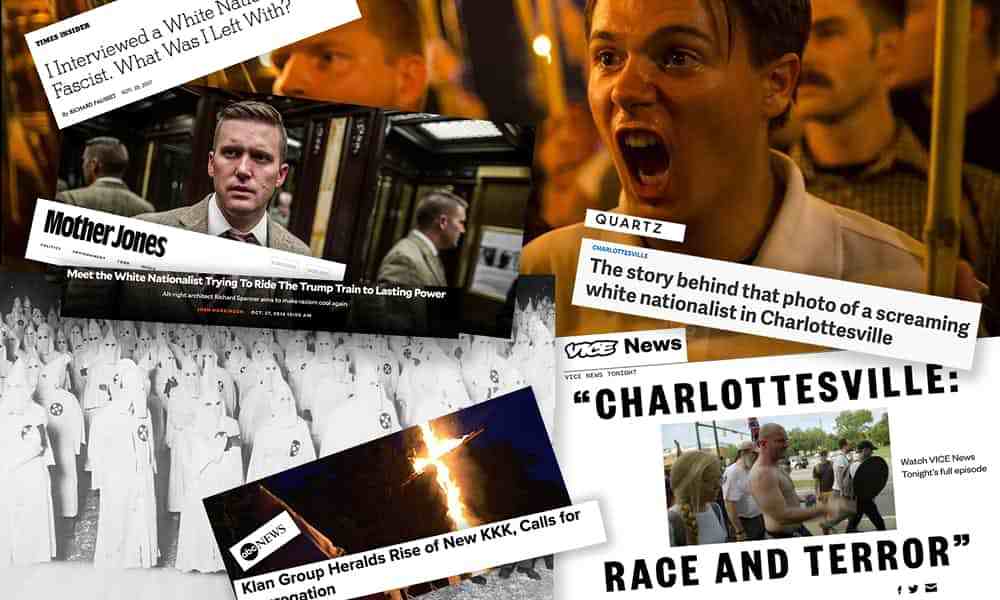 In August, hundreds of white men with torches marched across the University of Virginia campus.

They chanted “Jews will not replace us!” and “Blood and soil!” and fought with counter-protesters in the streets.

The footage and photographs from the far-right rally in Charlottesville, Virginia, left people around the world shaken. These were white nationalists and neo-Nazis marching proudly in public, faces bare, in support of an openly fascist ideology.

For months before the Unite the Right rally in Charlottesville, news outlets had been profiling the emboldened racist extremists who had celebrated the election of Donald Trump. The coverage had often sparked backlash, with readers across the political spectrum arguing that fringe racists were being given too much of a platform, and that media coverage was blowing their influence out of proportion.

Charlottesville made clear that far-right groups were a serious, violent threat. But it did not put an end to the debates over media coverage of these groups – and the fierce criticism when news organizations produced coverage that readers saw as too “normalizing”.

Guardian US and WNYC’s On the Media have collaborated on a radio episode looking at these debates over the coverage of America’s emboldened racist extremists. How should news organizations cover neo-Nazi and white nationalist groups? What does it take to cover them accurately – without simply giving them a platform for their ideas?

The episode brings together historians of American racism with seven reporters who have covered the far right over the past year. Together, they weigh in on the common mistakes journalists and editors make – and the false assumptions about racism at the root of many of these errors.

“I found myself at this fancy party in New York and there were all these fancy liberals and they wanted to talk to me about Charlottesville,” said Elle Reeve, a correspondent for Vice News Tonight, which produced the acclaimed 2017 documentary Charlottesville: Race and Terror, documenting the August Unite the Right rally in Charlottesville, Virginia.

“No matter how many times I told them that these guys were not poor, they kept saying: ‘Well, you know, whatever economic suffering has caused them to adopt racism, that’s unfortunate.’ No, these guys are like you. They are like you. They are from New Jersey. They went to prep school. They live on the Upper East Side. And it’s very hard for white liberals to accept that.”