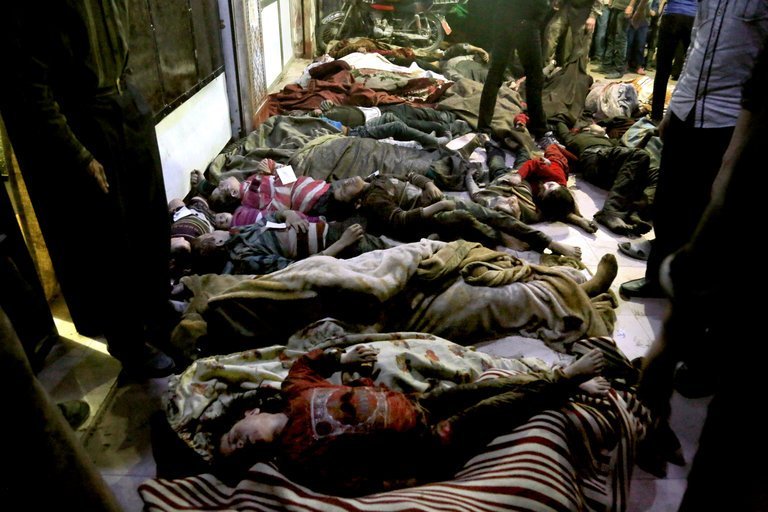 For two days and a night, the computer science student had been huddling with his family in the basement of their apartment building as pro-government forces rained bombs down on their rebel-held Syrian town.

After night fell, they heard the whirring of helicopter blades followed by the whistling sounds of objects falling from the sky. Soon, a strange smell wafted down the stairs.

The attack in the Syrian town of Douma on Saturday, which witnesses and medical workers said used chemical weapons, has resonated far beyond the war-scarred community’s destroyed buildings, ratcheting up tensions among world powers and threatening to escalate Syria’s multi-sided civil war.

President Trump has vowed to punish not only President Bashar al-Assad of Syria for the attack, but also Syria’s Russian and Iranian allies. On Wednesday, a Russian official said that any American missiles fired at Syria would be shot down, and Mr. Trump responded in a tweet that Russia should “get ready” for missiles that would be “nice and new and ‘smart.’”

Syria, Russia and Iran have denied the use of chemical weapons, accusing the rebels and rescue workers of concocting the story to gain sympathy as their defeat loomed.

While much about the attack remains unclear, a New York Times review of more than 20 videos of its aftermath, an examination of flight records compiled by citizen observers, and interviews with a dozen residents, medics and rescue workers suggest that during a military push to break the will of Douma’s rebels, pro-government forces dropped charges bearing some kind of chemical compound that suffocated at least 43 people and left many more struggling to breathe.

“You imagine yourself on Judgment Day, and there is death all around you,” said Mr. Hanash, the student. “It was a scene that you don’t want anyone to have to see: old men, women and children screaming and suffering.”

Regardless of the munitions used, the attack worked. Hours later, as rescuers lined up bodies in the street, the rebels agreed to hand over the town and be bused with their families to another rebel-held area.