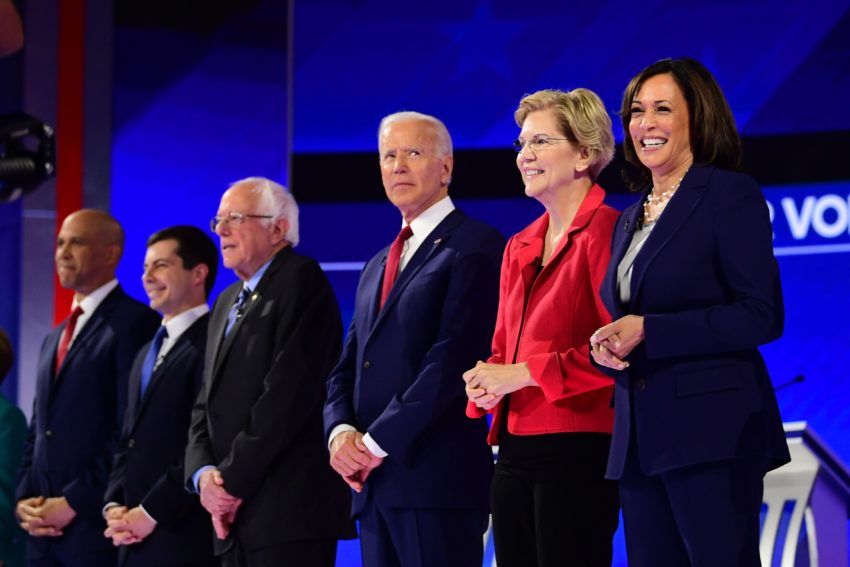 The 2020 Democratic presidential primary is in the middle of a slog, and Thursday night’s debate reflected that. The campaign is mature enough that multiple candidates have dropped out of the race but still young enough for the top-polling candidates to bring risk-averse approaches to the debate, limiting the possibilities for fireworks. It was late enough in the cycle for most of the arguments to be familiar to a highly informed voter but perhaps not late enough to qualify as must-see television for the less-engaged.

Little happened on Thursday night to directly and immediately threaten the polling lead of the top three presidential candidates ― former Vice President Joe Biden, Sen. Elizabeth Warren (D-Mass.) and Sen. Bernie Sanders (I-Vt.) ― and, beyond their now-standard opening 30-minute exchange on health care and “Medicare for All” and a brief scuffle on Biden’s vote for the Iraq War, they avoided directly criticizing each other.

Here are four takeaways from the third Democratic presidential debate:

The front-runners turn down showdowns

Polling in recent weeks has shown a solid top trio of Biden, Warren and Sanders, with Harris and South Bend, Indiana, Mayor Pete Buttigieg ― both of whom had stints in the top tier ― falling into the single digits. The fact that Warren and Biden, who have clashed in the past, were sharing the debate stage for the first time only increased expectations of a showdown.

Instead, new lines of contrast were few and far between, with all three top candidates opting to take a rain check on a climactic battle. Sanders and Warren teamed up to battle Biden in an occasionally testy health care exchange that mostly was a retread of arguments from earlier debates. Repeat viewers who were sold on Sanders’ Medicare for All plan and those who prefer Biden’s more incremental push to expand Obamacare were unlikely to have heard any arguments to budge them.

One answer from Sanders did stand out. After Biden brought up his own vote in favor of the Iraq War, Sanders highlighted his own opposition to the conflict.

“The truth is, the big mistake, the huge mistake, and one of the big differences between you and me, I never believed what [Dick] Cheney and [George W.] Bush said about Iraq,” Sanders said to Biden. “You’re right,” the former vice president responded, as many in the audience cheered.

But Sanders quickly let the topic drop, moving on to discuss his work to improve veterans’ health care as the top Democrat on the Senate Veterans Affairs Committee. In the same answer, he noted he had voted against increases in military spending during the Trump administration. That’s a potential point of contrast with Warren, but he never mentioned her votes to make the contrast clear.

Though all three top-tier candidates received plenty of attention from the moderators ― Biden led in speaking time, with 17½ minutes, Warren was second with 16½ minutes, and Sanders was in fourth beyond Booker with 14 minutes ― all also had stretches when they seemed to take a back seat. Their campaigns are likely to be fine with that. At this point, the front-runners have much more ground to lose than they stand to gain.

Beto feels at home in Texas

The goal of any lower-polling candidate is to have A Moment, and O’Rourke’s declaration of support for a mandatory buyback of assault weapons ― “Hell, yes, we’re going to take your AR-15, your AK-47,” he told the moderators. “We’re not going to allow it to be used against our fellow Americans anymore.” ― qualified as one and is likely to be one of the few clips voters who didn’t watch live will see from the debate. It’s likely to generate attention not only because the party’s base seems ready to embrace candidates adopting bolder positions on gun control but also because it’s a risky position for a Democrat to hold for the general election.

O’Rourke, who is polling in single digits, has adopted a more urgent tone in his campaign since the mass shootings in El Paso and Odessa, Texas, last month and has put an aggressive gun control push at the center of his messaging. It’s paying off: The O’Rourke campaign bragged that it had its best fundraising hour of the quarter during the debate. It’s possible this is O’Rourke finding his stride. But it’s also possible it leads to a burst of attention with little long-term effect. (See the praise of former Housing and Urban Development Secretary Julián Castro after the first debate for an example.)

Castro has consistently shown his willingness to draw contrasts and critique his opponents ― remember his attacks on O’Rourke in the first debate ― and Biden was his main target Thursday. His attack on the 76-year-old former vice president during the health care portion of the debate ― “You just said that. You just said that two minutes ago. You just two minutes ago said that they would have to buy in.” ― is unlikely to lead to a detailed policy discussion and has already led to a discussion about whether the attack was unfairly ageist. (Castro, in post-debate interviews, insisted he wasn’t taking a shot at Biden’s age.)

Sure, slamming Biden is likely to please progressives eager for the other candidates to knock the Delawarean from his perch atop the polls. The response to Castro’s comments, even in the immediate hours after the debate, illustrates the risks of throwing punches in a primary, especially when the other candidate has an extensive network of surrogates and allies like Biden does. The debate had barely ended when former Chicago Mayor Rahm Emanuel was on national television calling Castro “mean and vindictive.” Expect similar commentary from other Obama administration alumni with fond feelings for the former vice president.

At the same time, Castro, who is polling at around 1%, was not guaranteed to feature in post-debate chatter. The punches he threw at Biden mean he will be talked about ― something a candidate polling at 1% needs desperately. And another debate exchange made it clear Castro isn’t going to shy away from criticizing the other candidates.

“This is why presidential debates are becoming unwatchable,” Buttigieg said after the former San Antonio mayor’s exchange with Biden.

“Yeah, that’s called the Democratic primary election, Pete. That’s called an election,” Castro responded. “This is what we’re here for.”

Thursday’s debate moderators were two white men, one black woman and one Latino man. It was a diverse group of questioners, and it paid off. Some of the strongest questions of the night came from ABC News correspondent Linsey Davis and Univision anchor Jorge Ramos.

The majority of the moderators in the 2016 and 2018 Democratic debates were men, and predominantly white men. But the Democratic National Committee instituted a new rule for the 2020 election cycle mandating that every debate have a female moderator. It also encouraged news outlets hosting debates to include people of color.

On Thursday, Davis pressed Harris on her criminal justice record, listing positions that have changed over the years. And Davis pointedly read Biden one of his quotes from 1975, in which he said he didn’t believe society had any responsibility to address the legacy of slavery.

Ramos pressed Biden on President Barack Obama’s deportations of undocumented immigrants and asked him why Latinos should trust him. He also challenged Biden when he dodged the question. He then turned to Castro, the former Obama Cabinet secretary and the only Latino candidate in the field, and asked him why voters should trust Democrats to deal with immigration reform since the party failed to do it when it controlled Congress and the White House in 2009.

Amanda Terkel contributed to this report.