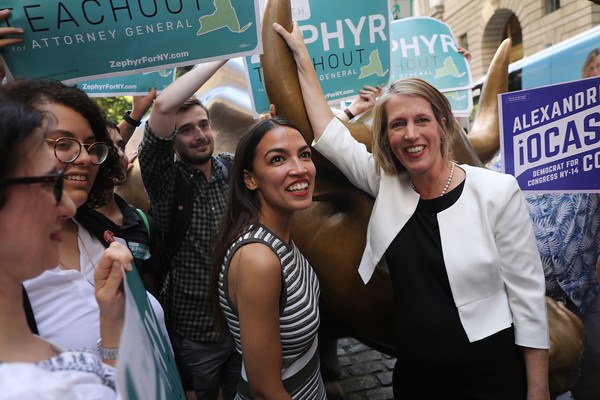 Alexandria Ocasio-Cortez announces her endorsement of Zephyr Teachout (right) for Attorney General of the State of New York at a press conference in lower Manhattan.

But he also happens to be one of eight candidates around the country who have earned the blessing of Alexandria Ocasio-Cortez, the Democratic Socialist wunderkind from New York City who convulsed the political world by pulling off the upset of the year in her late June primary defeat of Rep. Joe Crowley.

In the month since her win, Ocasio-Cortez has gotten too big to stay put in the Bronx. She’s become an instant celebrity of the Democratic resistance as well as a prime pinata for right wing adversaries seizing on her every utterance.

And now her show is on the road, as she lends support to a brigade of start-up insurgents she hopes to help lift into her fold. Last weekend, she trekked from Kansas to Missouri to rally for three congressional candidates. This weekend, she’ll hit four cities in Michigan to campaign for El-Sayed.

“She’s certainly validated the brand of politics that we’re engaged in. Unapologetic, honest, focused on speaking truth to power, and inspiring and engaging voters who felt locked out of the system for a long time,” El-Sayed says. “I think she brings a certain energy and validity to that approach. A lot of folks in the Democratic establishment tell you . . . the only way you win is speaking right to the middle of Democratic issues. We’ve got to be a lot more focused on the issues that real people are talking about and not these talking points. She’s shown how it’s done.”

The idea behind her national tour is to make her moment more than an anomaly in a single liberal enclave where she’s heavily favored to become the youngest woman ever elected to Congress. It’s to try to show that a rising tide of unrepentant liberalism can flourish from the surfing beaches in Hawaii to the corn fields in Kansas.

Last weekend in Wichita, Kansas, she, along with Sen. Bernie Sanders of Vermont, drew 5,000 people to a rally for James Thompson, who is mounting a re-match against GOP Rep. Ron Estes. Estes won a 2017 special election for an open seat there by 7 points in a district President Donald Trump carried by 27 points.

Estes’ seat is not a Democratic target in November, and yet the overwhelming reception Ocasio-Cortez received seemed to punctuate her larger point of challenging conventional political expectations.

“They told me that I would not be welcome,” Ocasio-Cortez said on stage gazing into likely the biggest crowd she’s ever stood before. “But you have proven them wrong.”

The more competitive race in Kansas sits in the eastern 3rd Congressional District, where Republican Rep. Kevin Yoder is expected to defend his seat against one of six Democrats competing in the Aug. 7 primary.

At a Kansas City, Kansas rally, Ocasio-Cortez tossed her support behind Brent Welder, a labor lawyer and 2016 campaign lieutenant for Sanders. But her endorsement of Welder has rankled some on the left, who complain she spurned Sharice Davids, a Native American lesbian mixed martial arts fighter who was born and reared in Kansas, whereas Welder was raised in Iowa.

Davids shrugs off the outsiders as a flash in the pan.

“To be honest, I haven’t felt an impact. I did talk to a couple of people who are voting for me who went to the rally,” she says. “The national narrative about progress I guess, I feel like all politics are local.”

In Missouri’s 1st Congressional District covering St. Louis, where Democrat Lacy Clay has held the seat for 17 years, it’s personal for Ocasio-Cortez. She met Clay’s primary challenger, Cori Bush, at a Brand New Congress conference in Kentucky last year and the two have remained in close contact ever since.

They promised to campaign for each other ahead of their primaries, but a car accident sidelined Bush from making the flight to New York days before Ocasio-Cortez’s upset win. Ocasio-Cortez still kept her end of the deal and not only rallied for Bush, but canvassed neighborhoods with her last Saturday.

“She had the walk sheets in her hand. And we both went door to door,” Bush says. “I can’t walk very far. At one point I had some pain, and she was holding me walking down the street.”

Bush adds, “It just showed everybody not only is this somebody coming to stump, this is somebody who actually cares.”

He respects her energy, but Jay Nixon, Missouri’s former two-term moderate Democratic governor who is backing Clay, doesn’t think Ocasio-Cortez and her clarion call to abolish Immigration and Customs Enforcement will push significant votes toward Bush.

“I don’t think you’ll be up late that night watching CD-1 Missouri,” he says. “I will tell you that the issue cluster that she’s working in doesn’t move the needle in Missouri. . . . They don’t like some stuff ICE may do, but to them, ICE are the police.”

“Once you get kinda far away from the coasts,” Nixon says, “they don’t tie [Ocasio-Cortez] as much to Bernie as they do her to, in essence, the protest movement.”

Just because a slate of candidates crave the Ocasio-Cortez endorsement, doesn’t mean they are embracing her label.

While they largely sign on with her tenets of Medicare for all, a $15 hourly minimum wage and swearing off corporate money, none of the four aforementioned Ocasio-Cortez candidates identify as Democratic Socialists.

“I think that these terms and these badges aren’t as useful as focusing on the facts on the ground, what people believe in and they’re willingness to engage,” El-Sayed says.

Socialism is a lightning rod term for many Americans that conjures up images of Karl Marx and is often convoluted with communism and the loss of individual liberty. “Name one country that socialism has ever worked!” said Meghan McCain on a tirade against the ideology on The View this week. “Every Democratic socialist that is going on TV saying that it’s good needs to start paying 90 percent in taxes.”

In Missouri, Clay has willingly deemed Bush “a Democratic Socialist,” adding that “the heartland in St. Louis . . . is not the Bronx.”

Bush says while she supports the local chapter of Democratic Socialists of America, she is not a member and contends the success of her campaign is “not because of a socialist message.”

But in taking issue with Clay’s characterization, she also adds “If you are a great progressive, how is socialism a curse word? We’re talking about democratic socialism. So that confuses me,” she says. “We’re all about taking care of people and making sure there’s equity . . . I don’t like to give it a title.”

As Ocasio-Cortez gains breakneck notoriety, she is attracting withering scrutiny. Her honeymoon phase won’t last forever. It might even already be over.

In an interview on PBS’ Firing Line, she attributed low unemployment numbers to everyone working two jobs and when challenged by host Margaret Hoover on her assertion that Israel is occupying Palestine, she threw her hands up and admitted, “I am not the expert on geopolitics on this issue.”

During her trip to Kansas, she appeared in a video promising to turn a Republican seat “red” instead of blue, an innocent error that still prompted widespread mockery among conservative agitators.

Republican Rep. Ron DeSantis, a candidate for governor in Florida, described her as “in a totally different universe. “It’s basically socialism wrapped in ignorance,” he told a group of supporters.

Even some Democrats think she’s overplaying her hand.

“She beat Joe Crowley because he didn’t spend enough time in the district and now she’s off already running around the country,” notes a staffer for the moderate Blue Dog Democratic caucus in the House.

Still, Ocasio-Cortez is unquestionably the rock star of the moment, and perhaps of the cycle.

And each candidate who is blessed by her gets an amplified voice, as well as a fervent, growing supporter base.

Some veterans of the Ocasio-Cortez campaign are already in Detroit to help El-Sayed claw from behind in his gubernatorial primary.

“We’re using a lot of the same sort of technological outreach tools to identify folks and pull them out,” he says. “We’re pulling out all the stops. I know that we will be successful in changing Michigan’s electorate in 2018.”

Ultimately, Ocasio-Cortez’s success – and that of progressives at large – will be defined by wins and losses.

The scoreboard will be posting numbers soon.

Kansas, Missouri and Michigan all hold their primaries on Aug. 7.

Even if she incurs defeats, her star might dull but won’t likely die.

Because more than Democratic socialism or progressivism, Ocasio-Cortez represents the power of the possible.