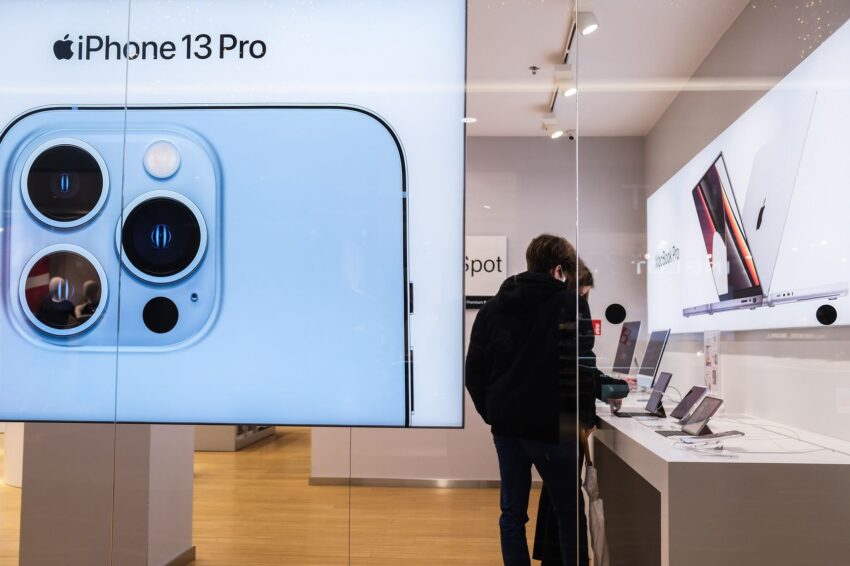 Apple Inc. posted quarterly results Thursday that shattered previous records, answering the concerns of jittery investors about the toll supply chain constraints are having on the world’s biggest company.

The iPhone maker had previously cautioned that sales growth in the important holiday quarter would be affected in the period as tech and auto industries face parts shortages, in particular a lack of microprocessors, amid disruptions from the global pandemic.

“We saw supply constraints across most of our products,” Mr. Cook said in an interview Thursday as the company released its results. “We’re forecasting that we will be less [constrained] in March than we were in the December quarter.”

Apple should see year-over-year revenue growth in the quarter that runs January through March, he said, while remaining circumspect about when the industry’s supply issues will clear up long-term. “We’re not projecting that,” Mr. Cook said. “You need to know a lot of things to be able to make an accurate forecast there, like how are other people’s demands in addition to what kind of supply we can squeeze out.”

U.S. equities have taken a wild ride this week amid concerns about inflation and geopolitical risks. While Apple shares had been on a tear earlier this month, they had fallen 10% this year before results were announced.

Apple’s results—and the market’s reaction—are being watched closely by investors as a bellwether ahead of other big U.S. tech companies posting quarterly results, including Amazon.com Inc., Google parent Alphabet Inc. and Facebook-parent Meta Platforms Inc. Those companies report next week.

How well is Apple positioned for long-term growth? Join the conversation below.

In what may be a preview of what’s to come, Microsoft Corp. on Tuesday reported strong profit and sales that beat analyst expectations. But the company’s stock was still punished, with shares falling more than 5% initially in after-hours trading that evening before they rose more than 2% on a rosy forecast. The dramatic swing underscores concern among investors worried about tech titans’ growth potential and valuations after two years of soaring to new heights.

Investors have been debating the extent to which Apple’s revenue would be affected by supply chain problems or waning interest in its latest iPhone lineup. Apple’s iPhone 13 models are very similar to versions introduced in October 2020, something that in the past has been linked to slower sales.

Year-over-year iPhone sales rose 9% to $71.6 billion during the fiscal first quarter that ran through December, the company said. That beat Wall Street expectations for a 3% gain, according to the average estimate from analysts surveyed by FactSet. Analysts project iPhone revenue will rise less than 1% this fiscal year compared with the preceding year, when sales rose 39% and helped fuel Apple’s greatest year ever.

Even with a slowdown, the Cupertino, Calif., tech giant reported profit of $2.10 a share for the important holiday period. Analysts had expected a profit of $1.90 a share.

That exceeded the company’s previous best quarter a year earlier, when it earned $1.68 a share, fueled by the arrival of the 5G-cellular-capable iPhone 12 models and sales of iPad tablets and Mac computers to workers and students in lockdown.

Early in the pandemic, Mr. Cook, a longtime logistics expert, largely navigated the company around the choppy waters of supply chain disruptions that had disrupted rivals. That ability was tested when the severity of shortages finally hit Apple last summer—a signal that no company could be spared from work stoppages, parts shortages and labor costs.

During the July-to-September quarter, Apple said it lost out on $6 billion in sales because of supply constraints and predicted a larger hit during the fiscal first quarter. On Thursday, Mr. Cook said the October-to-December period was in fact hurt more than $6 billion but didn’t say by how much.

In October, Apple executives also cautioned that while they expected overall sales to rise during the quarter versus a year ago, the company’s iPad business would fall because of supply limitations.

In total, fiscal first-quarter revenue rose 11% to a record $123.9 billion, beating analysts expectations for $119 billion. Sales of Macs exceeded expectations by rising 25%, while iPad revenue declined 14%, missing projections for a 2.89% fall. In general, Apple generates much less revenue in the March quarter compared to the December period.

Despite expectations that iPhone sales growth will slow this year, Apple shares had sailed higher in recent weeks before the recent marketwide downturn. The company’s market valuation briefly surpassed $3 trillion on investor enthusiasm for new product lines beyond the iPhone. Many are betting Apple’s foray into extended-reality headsets, possibly later this year, will open new doors for the company.

In recent weeks, some investors and analysts have also expressed increased optimism that Apple has figured out ways to boost production to meet demand.

Still, Apple had acknowledged longer-than-desired wait times for certain products during the gift-giving quarter. Adding another wrinkle to the holiday season, the company curtailed in-store shopping at several locations throughout December as the Covid-19 Omicron variant spread. The company had aimed to return office workers to their desks in February but has since postponed such plans

Apple typically faces scrutiny in the years after a big iPhone debut as analysts and investors ask what’s next to juice sales. Excitement ahead of the iPhone 12 pushed Apple shares to new heights in anticipation that the newest iPhone would fuel record sales.

Investors’ instincts proved correct. Even with Covid-related production delays, the introduction of the iPhone 12 in late 2020 helped fuel almost $100 billion in profit in fiscal year 2021.

Now investors and analysts debate whether the growth can continue.

Analysts such as Tim Long at Barclays say this year and next may prove more challenging as evolutionary iPhone offerings could lead to customers holding on to their phones longer. That’s similar to what happened with the iPhone 6s in fiscal year 2016 and iPhone XS in fiscal year 2019. “The iPhone 12 cycle was strong,” Mr. Long told investors in a note Monday. “We have seen this trend before.”

Some remain bullish. Dan Ives, an analyst for Wedbush who has been supportive about Apple, reiterated that sentiment in a note this week, calling the stock “a ‘safety blanket’ tech name in this market storm.”

“While the supply chain issues have curtailed some growth for Apple on this massive product cycle playing out across its entire hardware ecosystem, we believe the pent-up demand story for Cupertino is still being underestimated by investors,” he wrote.