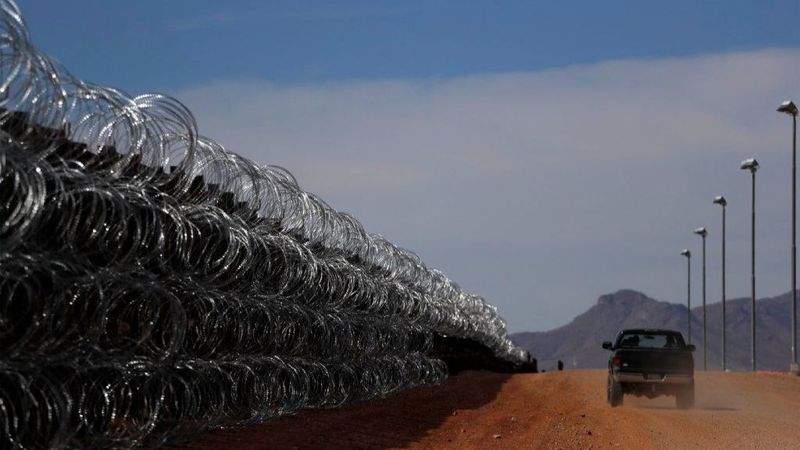 When the Trump administration abruptly shuttered the San Ysidro border crossing for five hours on the Sunday after Thanksgiving following a skirmish with a group of migrants, holiday traffic snarled for hours south of San Diego. Businesses on the U.S. side of the border lost about $5.3 million in sales, local officials said .Tens of thousands of people were temporarily stuck on both sides of the border, creating chaos in nearby arePresident Trump now is threatening to exponentially increase the scale of that disruption, vowing to indefinitely close the U.S. border with Mexico to show his resolve — and his pique — as tens of thousands of Central American migrants continue to jam legal entry points and unguarded remote areas.Trump’s acting chief of staff, Mick Mulvaney, said Sunday that the president, who has threatened to close the border before, is not bluffing. But White House officials declined to provide details of what, if anything, Trump intends to do.

It is probably impossible to close the entire 2,000-mile-long border. But Trump could shut some or all of the 47 official entry ports, which process more than 1 million people and about $1.7 billion in commerce every day.Even a limited and temporary closure would be felt from California to Texas. A longer-term closure would devastate local businesses and ripple through regional supply chains, directly affecting the farms and automobile manufacturers whose employees form the core of Trump’s political base. It would quickly face legal challenges and add to chronic staffing problems for already-stretched U.S. immigration enforcement agencies. It also would require Mexico’s cooperation, which is hardly assured.

The U.S. Chamber of Commerce, a pro-business organization, warned Monday of “severe economic harm on American families, workers, farmers, and manufacturers across the United States” if Trump closes the border.“I imagine they probably do have the authority to close any particular port of entry temporarily,” said Leon Rodriguez, director of U.S. Citizenship and Immigration Services from 2014-17. “Having said that, the political, logistical and economic consequences of doing that are potentially devastating.” Even some of Trump’s immigration allies worry about the economic impact of a border shutdown. “If this were to go on for more than a few days, you could see some American factories shutting down temporarily until it’s over,” said Mark Krikorian, the director of the Center for Immigration Studies, a Washington think tank interested in restricting illegal immigration. The White House could limit the economic impact, he said, by halting passenger, car and pedestrian border crossings while keeping rail and truck ports open.

“That would be one way to send a message to Mexico without as severe of an economic impact on the U.S.,” he said. Trump, who shut part of the federal government for 35 days in December and January in a dispute with Congress over his demands for a border wall, may decide those risks are worth the potential political gain as he gears up for his reelection campaign. He plans to travel to California on Friday for fundraisers in Los Angeles and a visit to the border at Calexico, where he is expected to highlight the recent surge in migrants from Central America. The administration has amped up its rhetoric, vowing to crack down on what officials called a spike in asylum seekers from Central America that has overwhelmed U.S. immigration agencies.

Homeland Security Secretary Kirstjen Nielsen ordered the Customs and Border Protection commissioner to reassign 750 officers from ports of entry to help Border Patrol agents operating primarily between ports of entry and to consider increasing that number. Nielsen told reporters Friday that closing ports of entry was also under consideration. “If we have to close ports to take care of all of the numbers who are coming, we will do that. So it’s on the table,” she said. Nielsen said pulling officers from busy crossing points would require closing some lanes that process cars and people. Squeezing ports of entry almost certainly would put more strain on the officers and Border Patrol agents who are dealing with the crisis, however. Administration efforts to hire 15,000 new border agents and immigration officers have largely flopped — the agencies face thousands of vacancies instead. If trucks carrying farm produce and car parts are barred from crossing the border, the economic impact would quickly spread. Nearly $13.7 million in agricultural products move through the port of entry at Nogales, Ariz., every day, for example, said Veronica Nigh, an economist with the American Farm Bureau Federation in Washington. Because those products are perishable, even a short closure could hurt farmers and consumers on both sides.

“It’s not like we have steel that can sit in storage and wait for a year to be shipped after it’s produced,” Nigh said. “We’re talking about a matter of hours on a lot of these products.” Similarly, the car parts shipped across the border each day are integral to supply chains that span the globe. A slowdown could idle workers and raise prices both in the United States and abroad. After the 9/11 attacks in 2001, the George W. Bush administration stepped up inspections at border ports that brought crossings to a standstill in some areas. Bush received a call from the president of General Motors, who said the auto giant would soon go bankrupt if the situation persisted, according to Alan Bersin, who served as a senior official in the Homeland Security Department in the Obama administration. Bersin said Trump has the executive authority to seal off the border, but his threats are “ultimately a bluff.” Last Tuesday, Nielsen held unannounced talks with Mexican counterparts in Miami, warning them of a slowdown at the border and urging them to do more to stop migrants traveling north. On Wednesday, she signed what she hailed as a “historic” pact with the Northern Triangle countries of Guatemala, Honduras and El Salvador to curb unauthorized migration, including joint police operations to combat trafficking. Even as Trump is seeking such cooperation, he said he would cut aid to the three Northern Triangle countries because “they haven’t done a thing for us.”

The State Department has been instructed to cut a total of $450 million that Congress had authorized for the three countries over the last two years but has not yet spent. The administration is required to inform Congress and, in the event of objections, to negotiate the size of the cuts. But White House officials can also ignore those objections and simply allow the funding to expire. “We have asked for details, and so far nothing,” said a senior congressional staffer with knowledge of Latin America. “The agencies were all caught off guard and now are scrambling to figure out what this means and what [Trump] was talking about.”