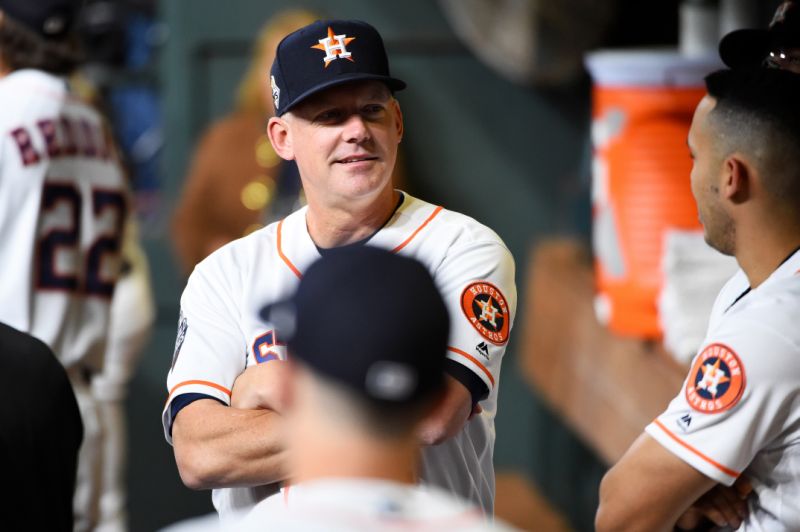 We’ve reached the point in Major League Baseball’s sign-stealing scandal where a new and bigger question has emerged beyond whether the Houston Astros or Boston Red Sox cheated.

It’s bigger than both the Astros, the team whose garbage-can banging system brought us into this controversy in November, and the Red Sox, the team most recently implicated in a sign-stealing scheme. It’s bigger than Astros manager A.J. Hinch, Red Sox manager Alex Cora, bigger than any individual player, executive and perhaps even bigger than the commissioner.

Is this scandal — this headline-generating, finger-pointing, comment-section-war-spurring scandal — going to ruin another generation of great baseball? And is this going to do what the PED era did to baseball?

Will it make us question everything we saw with our own eyes? Is it going to lead to decades of, “Yeah, but …” when we talk about the careers of Alex Bregman and Mookie Betts years after they’ve retired. Is it going to have fans saying, “What about …” when they talk about the Astros’ 2017 championship and the Red Sox’s 2018 title?

We’re long past accepting this as gamesmanship and players at the highest level just being super competitive. This is the reality of what effects technology will have on sports.

Now we’re left to wonder whether this is going to be another ugly asterisk for baseball.

Major League Baseball has to send a message that it cares about the integrity of the game, and make it clear to fans what is OK and what isn’t. It can’t be like the PED era all over again.

Did these teams break MLB’s rules regarding sign-stealing? If so, then throw the book at ’em and make sure future offenders know the punishment will be daunting.

Or will this be one of those things that’s viewed as only sorta bad? Like doctoring the ball. If that’s the case, be prepared for a mess.

At least when performance-enhancing drugs were the evil in question, we got to see a lot of home runs. Being left to wrestle with the ethics of it all later at least came after a thrilling show. Learning about and then figuring out how to punish teams involved in technology-aided sign-stealing operations isn’t nearly as sexy.

Major League Baseball is reportedly nearing the punishment phase of its investigation into the Astros’ sign-stealing scandal. In the coming weeks, we’re expecting to see strict punishments that could impact not just the current Astros but could also tangentially impact the Boston Red Sox, Baltimore Orioles or any other team that employs ex-Astros who were found to know about what was going on.

It sounds like this week’s revelation about the Astros could bring its own investigation too. If technology-aided sign-stealing is as prevalent as many believe around baseball, these investigations will never stop.

This will be less about punishing players, according to ESPN’s Jeff Passan, and more about the managers and executives who didn’t stop the sign-stealing schemes when they went beyond the letter of the law.

MLB clarified its rules on sign-stealing just a couple years ago. Players thumbing their nose at it was one thing. The leaders of these players? That would figure to be another thing entirely.

The league is fine with sign stealing done the old-school way, from runners on base picking up signs. If you don’t want to get your signs stolen by a runner on second base, the thinking goes, then do a better job of disguising them.

Technology is where the league draws the line. Teams are not to use cameras or phones or iPads or anything like that. The Astros’ alleged system was at least lo-fi in its delivery device. There’s no way an aluminum trash can counts as “technology,” but the Astros were using cameras on the field with a live feed to a TV screen in the clubhouse to relay the information to the trash-can bangers.

Likewise, the Red Sox reportedly used the team’s replay review room — a strict no-no, according to MLB — to figure out signs and relay them to the bench.

The question is: Will the verdicts from the league have enough teeth to stop other teams from doing this in the future? The Red Sox and Yankees were both punished previously for using technology in the dugout. At the time, MLB commissioner Rob Manfred said in a statement: “I have received absolute assurances from the Red Sox that there will be no future violations of this type.”

Yet here we are.

It’s fitting that all this is happening at the same time we have our annual grumble session about the Hall of Fame. Baseball writers across the land are asked to weigh the pasts of amazing baseball talents who were hitting homers and racking up strikeouts in an era with wishy-washy rules about human growth hormones and other PEDs.

Years later, figuring out whether Barry Bonds and Roger Clemens are worthwhile Hall of Famers has become an annual tradition of head-butting and arguing. Some writers turn into morality police. Others wash their hands of the whole process. Fans get outraged by writers trying to make sense of it all. And many of us are left to wonder how the Hall of Fame turned into such a mess.

The answer, as we know, is there weren’t firm rules.

Baseball has operated on this sliding scale of what is and what isn’t cheating for years. Greenies were OK, but PEDs weren’t. Doctoring the ball is against the rules, but it’s OK if it’s not too egregious.

As the old saying goes, you give ’em a foot and they’ll take a mile. In this case, you put a little bit of technology in the ballpark and teams launch clandestine operations.

So what’s going to happen this time? Will it be another wishy-washy rule that we’ll be wrestling with 20 years from now? Or will MLB lay down the law?

If it doesn’t, we might be dealing with another lost generation and another big asterisk.