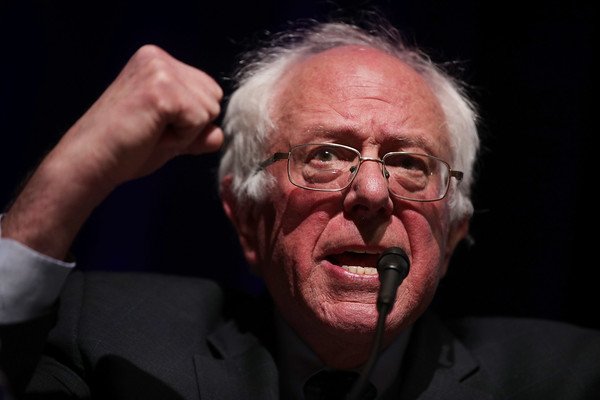 WASHINGTON — Bernie Sanders is campaigning for president again, officially entering the crowded 2020 Democratic presidential field on Tuesday with a vow to finish what he started in his last race for the White House.

“Together, you and I and our 2016 campaign began the political revolution. Now, it is time to complete that revolution and implement the vision that we fought for,” Sanders said in an email to supporters and a video announcing his candidacy.

The 77-year-old Vermont independent senator, who started his political career as a gadfly perennial candidate, remains a pacesetter of progressive politics in America, helping to craft a liberal agenda that includes everything from Medicare for All to a $15 minimum wage to free college tuition. Bernie Sanders to women on 2016 campaign staff: ‘I apologize’
JAN. 10, 201902:21
He first broke the news confirming another presidential bid early Tuesday on Vermont Public Radio, saying in an interview that he promises to “take the values that all of us in Vermont are proud of — a belief in justice, in community, in grassroots politics, in town meetings — that’s what I’m going to carry all over this country.”

Early polls show him far ahead of the rest of the pack and trailing only former Vice President Joe Biden in the nascent 2020 field.

“Three years ago, during our 2016 campaign, when we brought forth our progressive agenda we were told that our ideas were ‘radical,’ and ‘extreme,'” Sanders said in the email. “These policies and more are now supported by a majority of Americans.”

But with greater expectations comes less room for error, and given the size of the still-growing 2020 field, potentially less room to grow.

Sanders will come under more scrutiny than ever before from both the press and political rivals, including from sexual harassment allegations against 2016 campaign staffers that have roiled his campaign-in-waiting in recent months.

And instead of being the main alternative to a prohibitive frontrunner, as he was against Hillary Clinton, Sanders now faces stiff competition from a wide array of candidates for his core supporters of progressives and young people.

Even some of Sanders’ former staffers have already signed on with other candidates, though many have remained loyal.

And some Democrats remain bitter about 2016, accusing Sanders and his followers of damaging Clinton in ways that contributed to her defeat against Donald Trump.

But at the same time, Sanders will be much less lonely in the Democratic Party of 2019 than the one that existed in 2015 when he entered the presidential race. A small but vocal political ecosystem sympathetic to Sanders has sprung up since his first run, including political groups, left-leaning media organizations, such as the Intercept, and elected officials, including Rep. Alexandria Ocasio-Cortez, D-N.Y.

Meanwhile, the so-called establishment of the party that Sanders rails against is now fractured between several competing candidates.

Thanks in large part to pressure from him, the Democratic National Committee has greatly diminished the power of superdelegates in the nominating process, after they almost uniformly opposed Sanders in 2016.

And in a crowded field, a candidate who can hang onto a loyal base of supporters can win the nomination, even without a majority, as Trump proved in the GOP primary.

“Bernie Sanders has already won the debate in the Democrat primary because every candidate is embracing his brand of socialism,” McEnany said. “But the American people will reject an agenda of sky-high tax rates, government-run health care and coddling dictators like those in Venezuela.”

Sanders 2020 will likely focus more on racial and gender inequality than did Sanders 2016, as he suggested in his announcement email and on Vermont Public Radio.

“I think the current occupant of the White House is an embarrassment to our country,” he said. “I think he is a pathological liar … I also think he is a racist, a sexist, a homophobe, a xenophobe, somebody who is gaining cheap political points by trying to pick on minorities, often undocumented immigrants.”

Jeff Weaver has said he will not return as campaign manager, though he is expected to play a different senior role, to make way for a more diverse team of senior aides.

And Sanders is also expected to focus more on his personal history, something he chafed at doing last time around, highlighting his Brooklyn roots and activism in the Civil Rights Movement as a student at the University of Chicago.