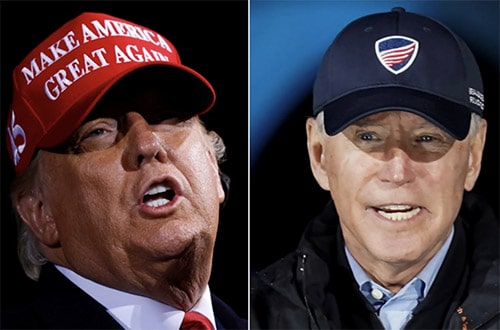 With just a day of campaigning left, the two candidates rally in key states as the bitter presidential race nears an end.

Hello and welcome to Al Jazeera’s continuing coverage of the US elections. This is Farah Najjar, Joseph Stepansky and William Roberts.

Joe Biden’s running mate Kamala Harris has just signed off for the night on Twitter, urging voters to get a good night’s sleep.

Facebook says it will add information labels to any posts by candidates claiming “premature victory” in the US election.

The platform will add specific information in top-of-feed notifications and continue showing the latest results in its voting information centre. It will also monitor for voter suppression attempts, and remove offending posts.

“We are monitoring closely and will remove content calling for coordinated harm or interference with anybody’s ability to vote,” the company said.

Social media platforms Twitter and Facebook have both flagged a post by US President Donald Trump that called a US Supreme Court decision on voting in Pennsylvania “very dangerous.”

Facebook said that voting by mail and voting in person have a “history of trustworthiness” in the US, with voter fraud being extremely rare.

The Centers for Disease Control and Prevention (CDC) has issued an advisory for voters casting their ballot in the US to help contain the spread of COVID-19.

Voters have been advised to avoid crowded ride-sharing services, buses, or trains when heading to polling stations.

And voters driving their own vehicle to their voting district, are also advised to check the voter line, and join only when the queue is shorter.

When voting, individuals are also advised to keep at least six feet apart from other people.

“Wear a mask around others, and wash your hands before and after voting – or if that’s not possible, use an alcohol-based hand sanitiser with at least 60 percent alcohol.” 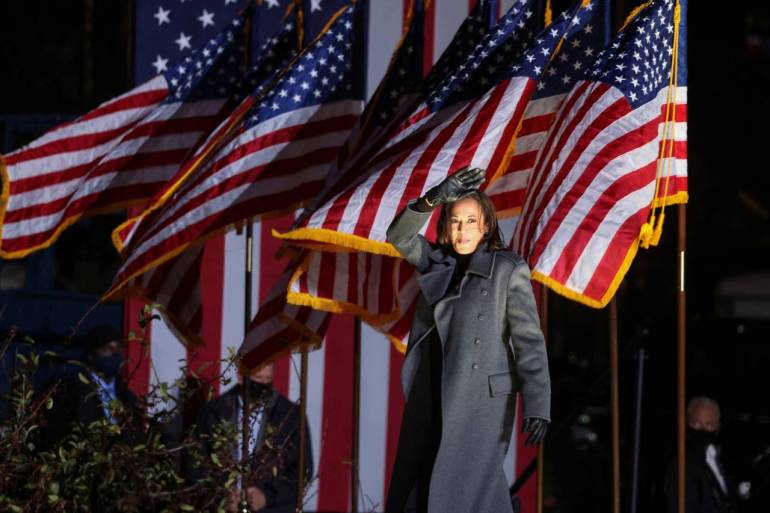 Democratic US vice presidential candidate Kamala Harris waves ahead of giving remarks during an event, in Philadelphia, Pennsylvania on the eve of the November 3 presidential election [Jonathan Ernst/Reuters]

‘Like a rock concert’, Trump rally in Wisconsin draws thousands

Tables teem with pro-Trump and anti-Biden merchandise. The road reveals a cluster of shuttle buses loaded with rally goers. Middle-aged male passengers mumble about the poor treatment of the “elegant, smart, beautiful” first lady Melania Trump while an elderly woman wishes Minnesota would rid themselves of “that lady,” referring to Ilhan Omar.

A line of people encircles the Kenosha Regional Airport hours before Trump is scheduled to appear. The growing crowd is clad in hats, blankets, and mittens to stave off cold winds whipping through the open landscape. The ‘Pledge of Allegiance’ barked over loudspeakers.

Inside, a family from Illinois’ offered reasons for making an hour-and-a-half drive north.

“It’s amazing. It’s like a concert,” said Greg Seigpiel, describing the last four years under Trump’s presidency as the best of his life. His wife, Tammi, who voted for Obama in 2008 out of a distaste for McCain, is motivated by “capitalism over socialism.”

College student, Ava, aged 19, is “sick and tired of suppressing my beliefs. I want to be around people who also share the same views as me and the silent majority I feel is coming up.”

Chants of “four more years” began to ring out from the crowd.

“I’m going to keep this very simple: if you believe in Joe Biden and you haven’t already voted, make a plan to get to the polls tomorrow. Turnout is going to be critical, so get there early,” Gaga said, removing her glitter “VOTE” mask to speak.

“I know you’ve seen the polls, the record number of mail-in and early votes, it’s tempting to feel comfortable and confident and sit back. But now is not a time,” Gaga said.

“Now is a time to show up and vote like this country depends on it, because it does,” she said. The crowd at the outdoor rally cheered and honked their horns. “We all know that this thing may come down to Pennsylvania. We need you.”

“If there was a Democrat who was behaving this way, the way our current president does, I couldn’t support him,” former President Barack Obama said of Donald Trump at a campaign rally in Miami, Florida.

“If I saw a Democrat who was lying every single day, I mean, the fact-checkers can’t keep up. It’s like over and over again. Yeah, I would say, ‘Well I don’t’,” said Obama who returned to Florida to urge Democrats who have not voted yet to go to the polls on Election Day.

“That’s not the example I want. I don’t trust that person to manage the country’s affairs, because… because it’s violating the values that we try to live by. And these are the values we try to teach our kids,” Obama said.

Trump claims improvement in trade, manufacturing jobs at rally in Michigan. Hits Biden as a ‘globalist’.

“Joe Biden is a globalist who spent 47 years outsourcing your jobs, opening your borders and sacrificing American blood and treasure in endless, ridiculous foreign wars,” Trump told a large crowd of supporters in Traverse City, Michigan.