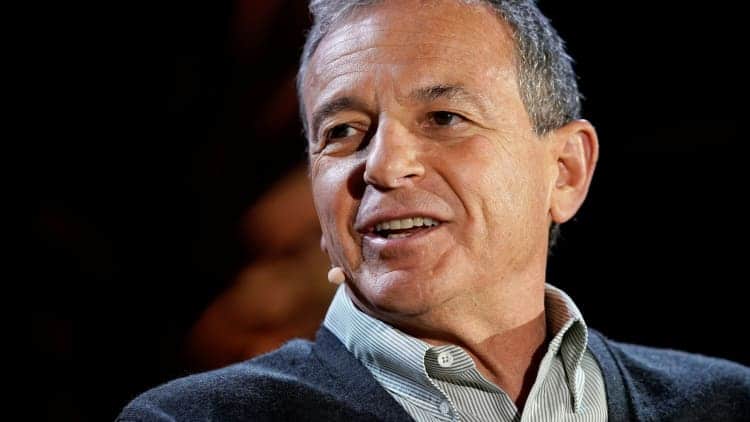 Bob Chapek, who most recently served as chairman of Disney parks, experiences and products, will assume the role of CEO, effective immediately, Disney announced. Chapek will continue to report to Iger and be appointed to the board of directors at a later date.

Shares of Disney fell about 2.5% after hours.

In an interview with CNBC’s Julia Boorstin after Disney’s announcement, Iger said the CEO reporting structure is a way to ensure a smooth transition.

“We’re not concerned at all about creating any confusion,” Iger said of the arrangement.

Iger will remain executive chairman of Disney through the end of 2021, according to the company. Iger had been planning his succession for a while, saying at Disney’s investor day last year that “2021 will be the time for me to finally step down.” Iger has been CEO of Disney since 2005. He’s pushed back his retirement several times in recent years, and Tuesday’s succession announcement came as a surprise.

On a call with investors shortly after the announcement, Iger addressed the timing of his announcement, which happened 22 months before he was expected to retire at the end of 2021. Iger said he decided to step down now because he wanted to focus on the creative side now that major projects like the Fox merger and launch of Disney+ were behind him. Iger said he would be able to help transition Chapek into the role while serving as executive chairman.
“With everything else falling into place, the time seemed right,” Iger said.

Iger has been instrumental in making Disney a media powerhouse with key acquisitions and content plays. He launched Disney+, immediately making Disney a popular streaming service provider. Disney said the service had 26.5 million paying subscribers during the first quarter of 2020 after launching in November.

Iger has beefed up Disney’s already-strong content library with several important acquisitions. Most recently, he ushered through Disney’s $71 billion acquisition of Fox’s entertainment business, which would add even more content to its streaming library. Earlier he added Star Wars and Marvel movies through its acquisitions of Lucasfilm and Marvel Entertainment, each for about $4 billion. Shortly into his tenure as CEO, Iger announced Disney’s $7.4 billion acquisition of Pixar Animation Studios, which made popular films like “Toy Story” and “Finding Nemo” before becoming part of Disney.

Iger also launched a theme park in Shanghai, further expanding Disney’s footprint across the globe and gaining 11 million visitors in its first year.

“With the successful launch of Disney’s direct-to-consumer businesses and the integration of Twenty-First Century Fox well underway, I believe this is the optimal time to transition to a new CEO,” Iger said in a statement alongside the announcement. 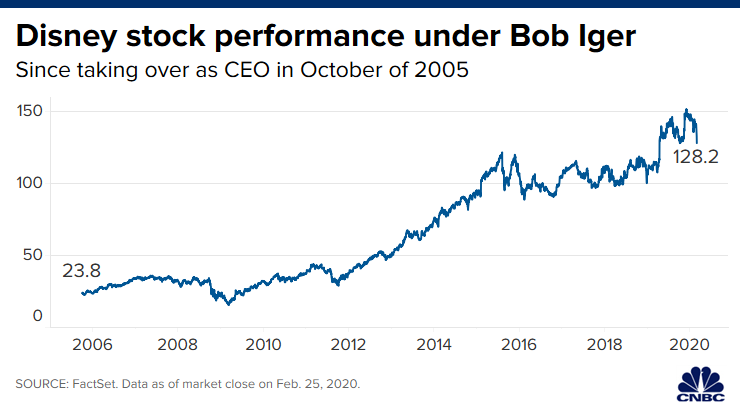 Chapek told investors that he has already had some exposure to the media and direct-to-consumer businesses in which he has not been directly involved in the past because Iger has encouraged his direct reports to interact.

“While I certainly have an opportunity to immerse myself more inside those media businesses, I have a bit of fluency, just like my peers have some fluency in our business,” Chapek said.

“That’s my sweet spot, and that is something I could leverage now throughout all my experiences not only at Disney, but even before Disney, in terms of figuring how we take the data, the information, the technology, and once again our storytelling, right direct to the consumer so that we can take all the great equities we have and continue to build those for our shareholders,” Chapek said later in his interview on CNBC.

Chapek said he envisions his role as CEO to be continuing to work on the “strategic pillars” established by Iger, especially Disney’s direct-to-consumer initiatives, “but at the same time look around the corner at what’s going on in the marketplace that would necessitate a fresh look at those things.”

“Right now the course that Bob has laid is one that we fully intend to follow and I think will pay dividends to shareholders for years to come,” Chapek said.