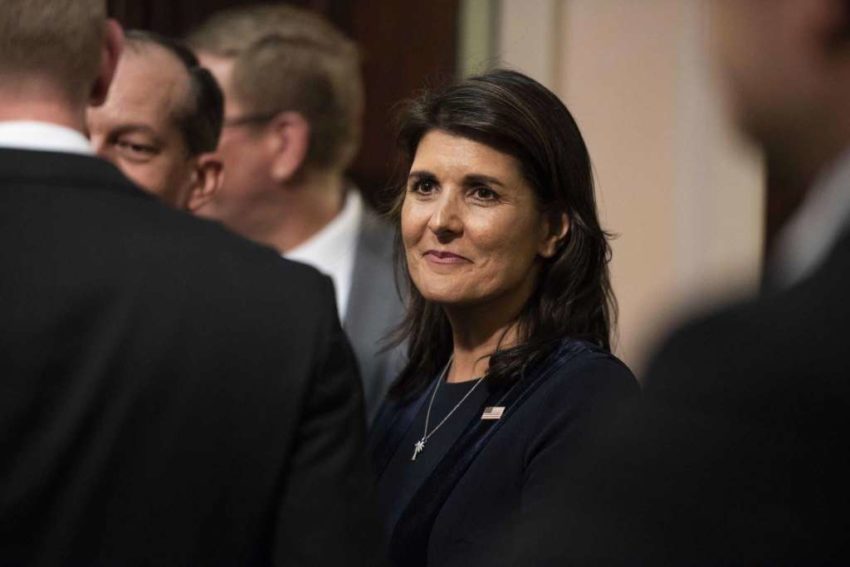 NEW YORK – Two of President Donald Trump’s senior advisers undermined and ignored him in what they claimed was an effort to “save the country,” former United Nations ambassador Nikki Haley claims in a new memoir.

Former Secretary of State Rex Tillerson and former White House Chief of Staff John Kelly sought to recruit her to work around and subvert Trump, but she refused, Haley writes in a new book, “With All Due Respect,” which also describes Tillerson as “exhausting” and imperious and Kelly as suspicious of her access to Trump.

“Kelly and Tillerson confided in me that when they resisted the president, they weren’t being insubordinate, they were trying to save the country,” Haley wrote.

“It was their decisions, not the president’s, that were in the best interests of America, they said. The president didn’t know what he was doing,” Haley wrote of the views the two men held.

Tillerson also told her that people would die if Trump was unchecked, Haley wrote.

Tillerson did not respond to a request for comment. Kelly declined to comment in detail, but said that if providing the president “with the best and most open, legal and ethical staffing advice from across the (government) so he could make an informed decision is ‘working against Trump,’ then guilty as charged.”

In the book, which was obtained by The Washington Post ahead of its release Tuesday, Haley offers only glancing critiques of her former boss, saying she and others who worked for Trump had an obligation to carry out his wishes since he was the one elected by voters.

The former South Carolina governor, widely viewed by Republicans as a top potential presidential candidate, has repeatedly sought to minimize differences with Trump while distancing herself from his excesses. Haley, 47, writes that she backed most of the foreign policy decisions by Trump that others tried to block or slow down, including withdrawal from the Iran nuclear deal and the Paris climate accord and the relocation of the U.S. Embassy in Israel to Jerusalem.

In a New York interview with The Post coinciding with the book release, Haley also dismissed efforts by House Democrats to impeach Trump. She said she opposes Trump’s efforts to seek foreign help for political investigations in a call with Ukraine’s president, but that the actions are not impeachable.

“There was no heavy demand insisting that something had to happen. So it’s hard for me to understand where the whole impeachment situation is coming from, because what everybody’s up in arms about didn’t happen,” Haley said.

“So, do I think it’s not good practice to talk to foreign governments about investigating Americans? Yes. Do I think the president did something that warrants impeachment? No, because the aid flowed,” she said, referring to nearly $400 million in sidelined military aid.

“And, in turn, the Ukrainians didn’t follow up with the investigation,” Haley said.

In her book, Haley points to several examples of disagreements with Trump. She said she went privately to the president with her concern that he had ceded authority to Russian President Vladimir Putin after the two leaders met in Helsinki in 2017 and with her objection to what she called Trump’s “moral equivalence” in response to a deadly white supremacist march in Charlottesville, Virginia, later that summer.

Haley’s experience as governor during the 2015 murders of nine black churchgoers inside a historic African American church in Charleston by an avowed white supremacist made Trump’s reaction to Charlottesville painful, Haley wrote. Trump said “both sides” had been to blame for the violence.

“A leader’s words matter in these situations. And the president’s words had been hurtful and dangerous,” Haley wrote. “I picked up the phone and called the president.”

Haley did not air any objections publicly, however.

Haley also recounts for the first time that she was treated for post-traumatic stress disorder following the Charleston murders. She described bouts of sobbing, loss of appetite and focus, and guilt for feeling that way when the victims and their families had suffered so much more.

In a CBS interview that aired Sunday, Haley said Trump was “not appropriate” to demand that four black or Hispanic Democratic members of Congress “go back” to their countries. Three of the women were born in the United States and all are U.S. citizens.

But Haley also defended Trump, saying “I can also appreciate where he’s coming from, from the standpoint of, ‘Don’t bash America, over and over and over again, and not do something to try and fix it.'”

Haley is the U.S.-born daughter of Indian immigrants, and writes in the book about the painful experience of being an outsider in the American South, neither white nor black. Her family was frequently ostracized, she wrote, and the Haley was essentially disqualified from a children’s pageant because Bamberg, South Carolina, only crowned one white winner and one black winner.

In writing about the administration, Haley recalls a disagreement she had with Tillerson and Kelly following an Oval Office showdown over her suggestion that the United States should withhold funding for the U.N. agency that supports Palestinians.

Kelly and Tillerson argued that cutting aid could lead to violence, greater threats to Israel, loss of U.S. influence and political problems for Arab allies, she writes. That view is common among Mideast watchers and Trump critics, who say the administration’s approach is punitive and shortsighted.

Haley said she had the backing of Trump’s Mideast peace envoys, including son-in-law Jared Kushner, but he was not in the room. She did not spell out the views of then-national security adviser H.R. McMaster.

In the meeting, Haley wrote, Trump seemed to be swinging away from her view, but told the three of them to go resolve their differences elsewhere. In Kelly’s office afterward, Kelly told her, “‘I have four secretaries of state: you, H.R., Jared, and Rex,” she wrote. “‘I only need one.'”

Tillerson and others had an obligation to carry out the president’s agenda because he had been elected, not them, Haley wrote. If they disagreed strongly enough, she said they should quit.

“I was so shocked I didn’t say anything going home because I just couldn’t get my arms around the fact that here you have two key people in an administration undermining the president,” Haley said in The Post interview.

On another occasion, Haley said Kelly stalled and put her off when she wanted to get in to see Trump. When she went around him, he complained. Kelly also made it clear that he thought Trump’s decision to make Haley a full member of the Cabinet, and have her attend National Security Council meetings, had been “terrible,” and that he would ensure the next U.N. ambassador did not carry that rank, she wrote.

Trump gave Haley a warm sendoff last fall, while Kelly’s departure was announced in chillier terms weeks later. Haley’s successor, Kelly Craft, who assumed the U.N. job in September, does not carry the same rank Haley did. Tillerson, meanwhile, was fired by Trump via Twitter in March 2018.

“I have found in politics that when you are a woman in politics you encounter two types of people,” Haley said in the interview, conducted at her publisher’s offices in Lower Manhattan.

Asked whether she was calling Kelly sexist, Haley said she had no personal quarrel with the retired four-star Marine general, whom she called a patriot.

“It’s a way of saying that sometimes he was not as conscious of the job I was trying to do,” Haley said.

Trump liked her direct approach and was respectful when they disagreed, Haley said.

She wrote that each had taken the other’s measure during the Republican primary, when she first backed Florida Sen. Marco Rubio of Florida and publicly called on Trump to release his tax returns. Trump tweeted that “the people of South Carolina are embarrassed by Nikki Haley!”

“Trump had been kicked, and he was hollering. But what he didn’t know then was, when I get kicked, I holler too,” Haley wrote.

She fired back with what she describes as “Southern-woman code.”

“Bless your heart,” she tweeted.

The book’s title is a reference to Haley’s comment last year publicly refuting an assertion by White House economic adviser Larry Kudlow that she had suffered “momentary confusion” about forthcoming U.S. sanctions on Russia.

In a detailed blow-by-blow account, Haley wrote that she had gone on television at the request of the White House to address the U.S. response to a deadly April 2018 Syrian chemical weapons attack and the U.S. view that Russia was complicit. When asked about punitive sanctions, Haley said she answered with the latest information she had, which was that Trump had approved new sanctions that would be announced shortly.

Haley said when a promised White House statement holding her blameless failed to materialize later that day or the next, she gave Kelly a deadline of the close of the following day – a Tuesday – before she went public. Kudlow’s remark to reporters on that Tuesday afternoon was evidence that Kelly did not intend to “fix this,” she wrote.

Bucking some members of her staff who urged her to let it slide, Haley told a reporter: “With all due respect, I don’t get confused.”

Kudlow called within 15 minutes to apologize, and then went public with a mea culpa.

“Women are cautious about politics, for good reason,” she wrote. “It’s not a pretty business. It’s often hateful. It would be wonderful if we could change our politics in America to make it less nasty and less personal. But until that happens, especially if you’re a woman, you have to stand up for yourself. Always.”

The book leaves the door open to a potential return to politics, but is silent about any White House ambitions. In the interview, Haley waved off the question. She will evaluate her next steps year by year, she said.

“I’m not even thinking that way. I’m thinking more of, we need to do all we can to get the president re-elected. And then from there, deciding how I will use the power of my voice,” Haley said.

“I know I’m too young to stop fighting, I know that. And I know that I need and want to be involved in some way that’s helpful.”