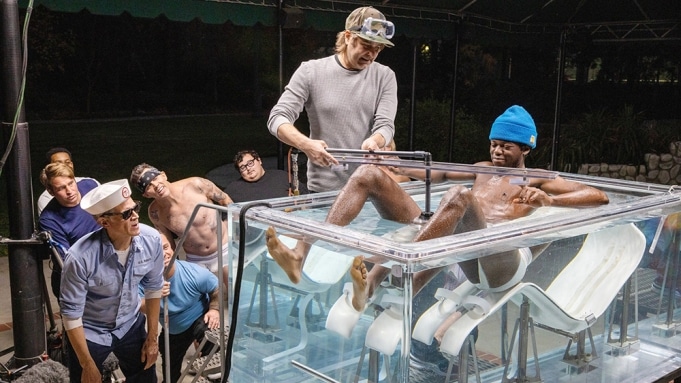 After living through nearly two years of a pandemic that won’t end, Americans, as it turns out, were in desperate need of a laugh.

“Jackass Forever,” the fourth installment in the ongoing saga of projectiles to the groin, collected $23.5 million from 3,604 North American locations in its debut, landing on the higher end of expectations. The latest “Jackass,” starring Johnny Knoxville, Steve-O, Wee Man and other daredevils from MTV days, had been widely expected to win the weekend, but its victory is still surprising and impressive because it has been some time since a pure comedy has claimed the top spot on box office charts. In catapulting to first place, “Jackass Forever” finally took down reigning champion “Spider-Man: No Way Home,” which had spent six of the last seven weeks at No. 1.

“Jackass Forever” has been a (unexpected?) hit with critics, notching a solid 85% on Rotten Tomatoes and “B+” CinemaScore from audience members. Ticket buyers were overwhelmingly male at 68%, while 25% were over the age of 35 and 67% were between 18 and 34. The breakdown indicates that “Jackass,” which began as an MTV television series more than two decades ago and continued with three other R-rated reckless prank films, has enduring popularity among its initial fanbase while managing to bring in new admirers of fart and male junk-centric stunts.

“In a business that doesn’t surprise all that often, it’s sure nice to know that surprises — good ones — can still happen,” says Chris Aronson, Paramount’s president of domestic distribution. “I was pretty heartened by the percentage of moviegoers over 35. Who knew?”

Variety’s chief film critic Owen Gleiberman had positive things to say, writing in his review that “Johnny Knoxville and company are now middle aged, but that hasn’t slowed their juvenile masochistic fervor.” And with a $10 million production budget, “Jackass Forever” will be laughing all the way to the bank.

“It’s extremely hard to keep it fresh and funny for this long, but ‘Jackass’ is doing that,” says David A. Gross, who runs the movie consulting firm Franchise Entertainment Research. “At a cost of only $10 million, the film is going to be very profitable.”

“Moonfall,” the weekend’s other new nationwide release, has less to celebrate. The science-fiction catastrophe film crash-landed on the lower end of projections, bringing in $10.1 million from 3,446 venues. Those ticket sales are potentially problematic because “Moonfall” cost $140 million to produce, making it one of the most expensive independent films in history. Commercial sentiment may not help; moviegoers stuck the film with an unenthusiastic “C+” CinemaScore. Critics weren’t much kinder (it has a 39% on Rotten Tomatoes), though reviewers like Variety’s Peter Debruge would argue the tale of lunar mayhem is so bad it’s good. “Sure, ‘Moonfall’ is all kinds of stupid, but it’s a heckuva lot funnier than Adam McKay’s all-star satire. I had a blast, and would gladly saddle up for a second viewing,” he wrote. Unless the movie becomes a huge hit overseas, however, “Moonfall” likely will not become a financial success.

Emmerich, the filmmaker of commercial smashes like “Independence Day,” “The Day After Tomorrow” and “2012,” was once the premier chronicler of big-budget catastrophe. But in the case of “Moonfall,” which stars Halle Berry, Patrick Wilson, John Bradley, Michael Peña and Donald Sutherland and centers on efforts to prevent the moon from colliding with Earth, his movies aren’t offering the kind of stress-free escapism that pandemic-fatigued audiences are looking for. Lionsgate is only distributing the film, so the company isn’t on the hook for the entire budget.

“At the moment, with the world coming apart in real time, who wants to sit through a disaster story? It’s more fun to laugh at ‘Jackass,’” says Gross.

Given the light release schedule, “Moonfall” managed to place in second on domestic box office charts. The movie narrowly beat Sony’s “Spider-Man: No Way Home,” which dropped to the No. 3 spot in its eighth weekend of release. The comic book adventure, led by Tom Holland, scraped together $9.6 million from 3,600 theaters, marking a scant 11% decline from its prior outing. After two months on the big screen, the latest Spidey story has grossed an eye-popping $748.9 million at the domestic box office.

That means “No Way Home” is just $11.1 million away from unseating James Cameron’s 2009 blockbuster “Avatar” ($760 million) as the third-biggest domestic release in history (not adjusted for inflation). At the global box office, where “Avatar” holds the all-time record with $2.802 billion, “Spider-Man” is holding steady in sixth place with $1.77 billion. Since “No Way Home” hasn’t been granted a release date in China, the world’s biggest theatrical market, it’ll have trouble cracking the coveted $2 billion mark, a threshold that only five films have ever crossed. But, of course, none of those films premiered during a pandemic.

At No. 4, Paramount’s slasher sequel “Scream” generated $4.7 million from 3,227 screens. It pushes the film’s four-week total to $68.9 million. Universal’s holiday release “Sing 2” rounded out the top five, collecting $4.1 million from 3,266 theaters. The animated musical comedy dropped a mere 11% from the weekend prior, which is impressive considering the film is available to rent online. Since debuting around Christmas, “Sing 2” has grossed a mighty $139.5 million.

Among specialty releases, Neon put “The Worst Person in the World” on four screens, where it amassed $135,042. That translates to an excellent $33,760 per screen, the highest for any film in 2022 and the third-highest for any film in 2021 following “Licorice Pizza” and “Spider-Man: No Way Home.” The foreign-language film has been rapturously reviewed, holding a 99% on Rotten Tomatoes. Directed by Joachim Trier, the Oslo-set romantic drama “The Worst Person in the World” stars Renate Reinsve as a woman navigating the ups and downs of life in her late 20s and early 30s.

“I truly love ‘The Worst Person in the World,’ and experiencing it in a cinema with an audience was one of the best times I’ve had all year,” said Elissa Federoff, Neon’s president of distribution. “Seeing packed theaters in NY and LA felt so good, and was a true signifier for the return of the platform release and our specialty box office. I couldn’t be more pleased to see the heartfelt embrace for this film and independent cinema overall.”