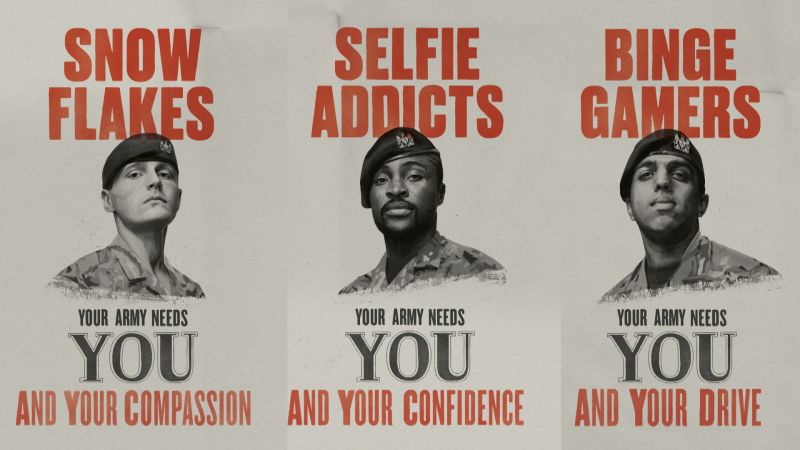 Anew Army recruitment campaign seeks to target gamers and millennials stuck in ‘boring jobs’. In the new series of adverts the Army hopes to show how current 16 to 25-year-olds may already have many of the attributes needed in the modern military, but either dismiss them as irrelevant or see them as embarrassing.

The new recruitment advertising campaign, titled ‘Your Army Needs You’, launches on January 3 with a series of adverts on TV and the internet as well as billboard posters.

The three adverts tell the stories of individuals whose perceived weaknesses are seen as strengths by the Army.

Potential recruits are shown at home or work, with others calling out their stereotypes, before the scene changes to depict them in the Army performing roles where their potential is recognized.

The Army hopes to show it can see potential beyond the stereotypes of millennials and Generation Z – those born from the 1980s to the mid-2000s.

The Ministry of Defence says that 72 percent of young people describe themselves as ambitious yet feel undervalued and want a job with real purpose.

The campaign also features Kitchener-style illustrations of soldiers with stereotype labels which will be featured on billboards and outdoor advertising around the UK.

In one of the posters, a ‘class clown’ is praised for his spirit. Another highlights the compassion shown by so-called ‘snowflakes’. Gaming and selfie addicts are said to have admirable levels of drive and confidence and a woman described as a ‘me me, me millennial’ is celebrated for her self-belief.

According to new figures from The Entertainment Retailers Association (ERA), the video games sector now accounts for more than half of the entertainment market. The ERA said the gaming market’s value, at £3.864 billion, is more than double what it was worth in 2007. 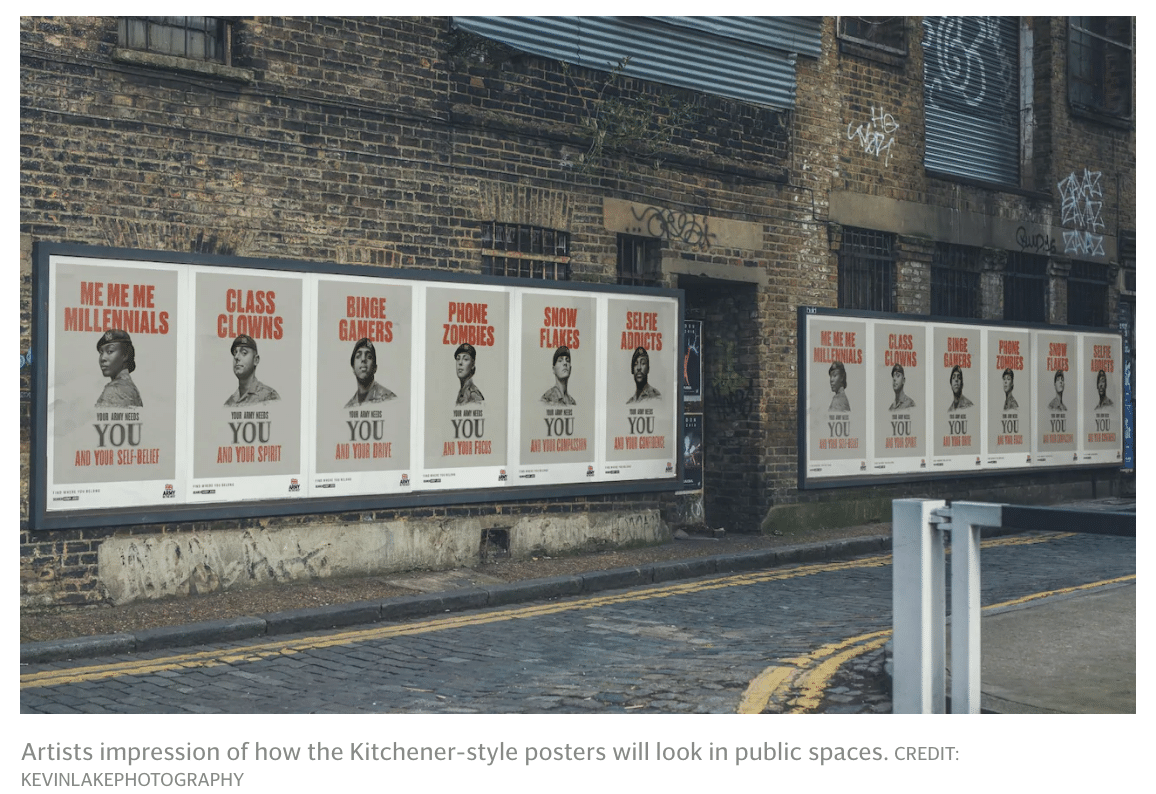 The video game Fortnite is considered the most popular computer game ever made and is currently thought to have over 200 million users. The Army is hoping to tap into this market of gamers.

Major General Paul Nanson, the head of Army Recruiting said: “The Army sees people differently and we are proud to look beyond the stereotypes and spot the potential in young people, from compassion to self-belief.

“We understand the drive they have to succeed and recognize their need for a bigger sense of purpose in a job where they can do something meaningful.”

In one advert a young person is seen avidly playing computer games, to the derision of his family, before his interest in technology is shown to be a skill sought after by the military.

In another, a supermarket trolley stacker is seen being ridiculed by her colleagues for being slow, before she is then shown in a combat situation where patience and attention to detail are critical.

The Army is struggling to meet its manning requirement. According to the most recent government statistics, the Army numbered 79,640 soldiers, out of a requirement for 83,500. Army strength had declined by 3.1 percent in the year to October 1, 2018.

Gavin Williamson, the Defence Secretary, said: “People are fundamental to the Army.  The ‘Your Army Needs You’ campaign is a powerful call to action that appeals to those seeking to make a difference as part of an innovative and inclusive team.

“It shows that time spent in the Army equips people with skills for life and provides comradeship, adventure and opportunity like no other job does.”

“Now all jobs in the Army are open to men and women.  The best just got better.”

The campaign has kept the slogan ‘Be The Best’. There had been speculation early in 2018 when the last series of recruiting adverts were launched, that the line was to be removed from future army recruitment campaigns. Reportedly the Defence Secretary had stepped in to demand the slogan be retained.