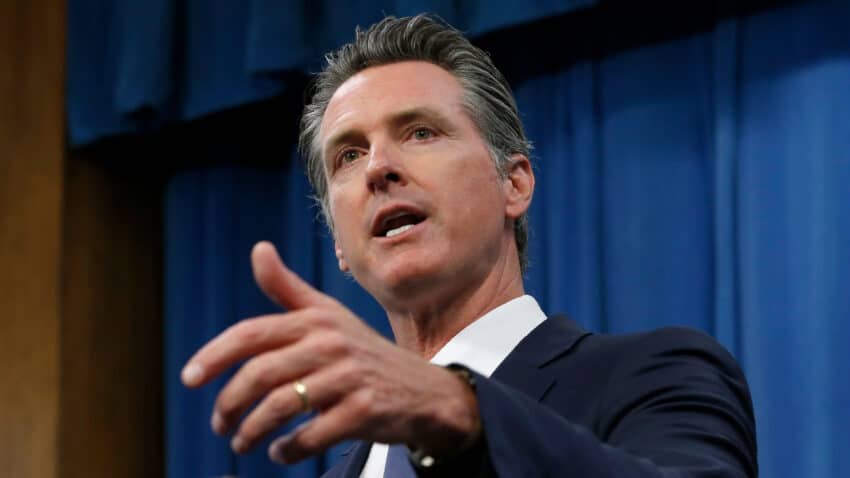 Governor Gavin Newsom is imposing an overnight curfew on more than 37.75 million Californians for the next month as the state battles an alarming surge in coronavirus cases.

Newsom announced the ‘limited stay-at-home order’ banning non-essential work and gatherings between 10pm and 5am on Thursday, as the state recorded its highest number of daily new COVID-19 cases since August with 11,478.

The order will go into effect on Saturday in counties that are in the purple tier of the state’s color-coded system for reopening the economy. Forty-one out of California’s 58 counties – 94 percent of the state population – are in that tier.

The move comes just days after the state imposed restrictions limiting business operations in purple counties, which have the most significant increases in virus cases with positivity rates exceeding eight percent.

‘The virus is spreading at a pace we haven’t seen since the start of this pandemic and the next several days and weeks will be critical to stop the surge. We are sounding the alarm,’ the governor said.

‘It is crucial that we act to decrease transmission and slow hospitalizations before the death count surges. We’ve done it before and we must do it again.’

The order will last one month, until December 21, but could be extended if infection rates and disease trends don’t improve, according to the California Department of Public Health (CDPH).

While non-essential businesses must close by 10pm, restaurants will be permitted to offer takeout food and people can perform some routine activities like walking the dog.

Residents will still be able to get medical care, pick up prescriptions and take care of other essential needs.

‘Activities conducted during 10 PM to 5 AM are often non-essential and more likely related to social activities and gatherings that have a higher likelihood of leading to reduced inhibition and reduced likelihood for adherence to safety measures like wearing a face covering and maintaining physical distance,’ the CDPH said in a news release.

Newsom’s latest order mirrors the one he imposed in March, except that this time it is limited to the highest-risk counties and only affects overnight hours.

‘We know from our stay at home order this spring, which flattened the curve in California, that reducing the movement and mixing of individuals dramatically decreases COVID-19 spread, hospitalizations, and deaths,’ California Health and Human Services Secretary Dr Mark Ghaly said.

‘We may need to take more stringent actions if we are unable to flatten the curve quickly. Taking these hard, temporary actions now could help prevent future shutdowns.’

Newsom and state health officials have significantly ramped up warnings about the virus in recent weeks after the state saw a 50 percent increase in new cases during the first week of November.

California guidelines issued on October 9 and in place when the dinner took place on November 6 state: ‘Gatherings may occur in outdoor spaces… provided that at least three sides of the space (or 75%) are open to the outdoors.

‘Seating must provide at least 6 feet of distance (in all directions—front-to-back and side-to-side) between different households. Gatherings that include more than 3 households are prohibited.’

However, separate guidelines for restaurants in place at the same time say only that outdoor seating should be ‘prioritized’ and that guests can be seated within six feet.

On the issue of households, the guidelines state only: ‘Limit the number of patrons at a single table to a household unit or patrons who have asked to be seated together.’

News of the French Laundry dinner emerged as case numbers in California rose and as Newsom chastised people for ‘letting their guard down’ during gatherings.

Last Friday the governor urged California residents not to travel out of the state for the holidays and imposed a two-week quarantine for those who do when they arrive back home.

A group of California lawmakers ignored that advice and traveled to Hawaii for a policy conference this week – heightening public outrage that officials aren’t practicing what they preach.

At least seven assemblymembers and one state senator from districts around California are among the 75 people attending this week’s conference hosted by the Independent Voter Project (IVP) at the five-star Fairmont Kea Lani Hotel in Wailea, Maui, according to the Los Angeles Times.

Several of those legislators have now come out to defend their decision to ignore California’s travel warnings – arguing that their attending the conference was important because it includes discussions about pandemic policies.

The IVP conference began on Monday – the same day that Newsom announced 41 of California’s 58 counties would be moving into the purple tier – up from 13 counties last week.

IVP has declined to disclose which California legislators are attending the conference but eight names emerged anyway – with some identifying themselves and others staying silent.