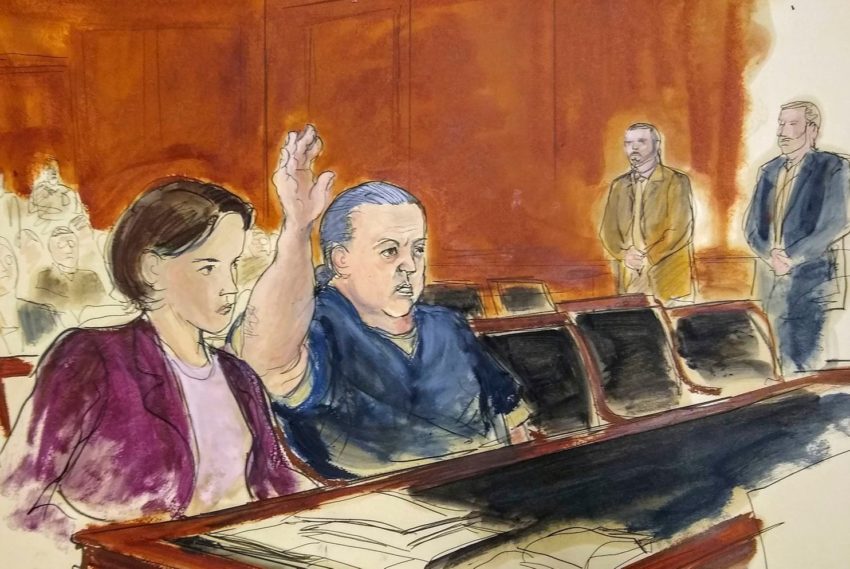 Cesar Sayoc, the Florida man accused of mailing explosive devices to more than a dozen politicians and media figures who have been critical of President Trump, pleaded guilty Thursday in federal court.

Sayoc, 57, was arrested and charged in October after a series of possible explosive devices were sent to former president Barack Obama, former secretary of state Hillary Clinton and the news network CNN, among others. Officials said he sent a total of 16 devices to 13 people across the country.

On Thursday, Sayoc appeared in a Manhattan courtroom and read from a brief written statement in a quiet, raspy voice. Naming recipients of the packages, Sayoc acknowledged that he had created the devices — using materials that included powder from fireworks — and sent them in the mail.

“I knew these actions were wrong. I’m extremely sorry,” Sayoc said. He briefly lost his composure at one point while speaking, prompting his attorneys to rub his back.

Responding to a question from U.S. District Judge Jed S. Rakoff, Sayoc said: “I was aware of the risk that they would explode.”

[How a lone fingerprint and misspellings helped the FBI find Sayoc]

Sayoc’s guilty plea had been anticipated since his court docket showed last week that a pretrial conference scheduled for Thursday had been changed to a “plea” hearing. He had previously pleaded not guilty.

An attorney for Sayoc did not immediately respond to a request for comment. Sayoc, who faces a maximum possible sentence of life in prison, is scheduled to be sentenced on Sept. 12.

The string of potentially explosive packages caused panic across the country as they were received or intercepted en route to current and former government officials as well as prominent political donors. The packages were addressed to two former presidents — Obama and Bill Clinton — along with sitting United States senators, the actor Robert De Niro and the billionaire activist George Soros, among others.

All of the targets had criticized Trump, who had apparently become the focus of Sayoc’s intense admiration.

People who knew Sayoc have described his peripatetic existence, saying that he lived for years out of his van while working as a DJ or bouncer at strip clubs. He was charged with a number of crimes over the years, including theft and battery; in one case, he was accused of invoking Sept. 11, 2001, attacks while threatening the power company.

In court on Thursday, Sayoc responded to questions posed by the judge by saying he had dealt with alcohol issues in the past.

Sayoc’s van became a prominent symbol online after his arrest, adorned with images of Trump and criticisms of Trump’s foes, including several of the individuals who authorities said were targeted by the packages.

After Sayoc was arrested, Trump said he “did not see my face on the van” and acknowledged: “I heard he was a person who preferred me over others.”

[The package bomb suspect, once aimless, found inspiration in Trump]

Trump and his allies have repeatedly pushed back against the idea that his incendiary rhetoric could be linked to extremist violence, including most recently in the wake of the New Zealand mosque attacks. The suspected attacker there referred to immigrants as “invaders” in a manifesto, similar to the language authorities say a gunman used before opening fire in a Pittsburgh synagogue.

Trump has also used the same wording, including not long after the New Zealand attack. Pressed on the criticisms, Mick Mulvaney, the acting White House chief of staff, said Sunday that it was “absurd” to connect Trump’s statements with the New Zealand manifesto.

“There are folks who just don’t like the president, and everything that goes wrong, they’re going to look for a way to tie that to the president,” Mulvaney said on “Fox News Sunday.”

Federal officials called the wave of potential explosive devices sent out in October 2018 a “domestic terror attack” and accused Sayoc of endangering numerous lives. Prosecutors said Sayoc began searching for the homes of some people targeted as early as last July and continued into the fall. Authorities also continued to recover more devices after Sayoc was arrested.

The first package was found on Oct. 22, a Monday, and the investigation and anxiety only grew as more devices were identified in the days that followed. CNN’s New York offices were evacuated when a package addressed to John Brennan, the former CIA director, was found in the mailroom, a situation that played out on live television. Packages were soon found in Florida, Delaware and California.

By that Friday, authorities closed in on Sayoc outside an auto supply store in Plantation, Fla., after finding what Christopher A. Wray, the FBI director, said was a fingerprint on one of the envelopes containing a device. Wray also said there were potential DNA matches connecting Sayoc to some of the devices.

While none of the devices detonated, Wray said they were “not hoax devices.” Authorities said all 16 were similar, describing them as “improvised explosive devices” containing pipe filled with explosive material, wiring and a small clock. Some, they added, also held shards of glass.