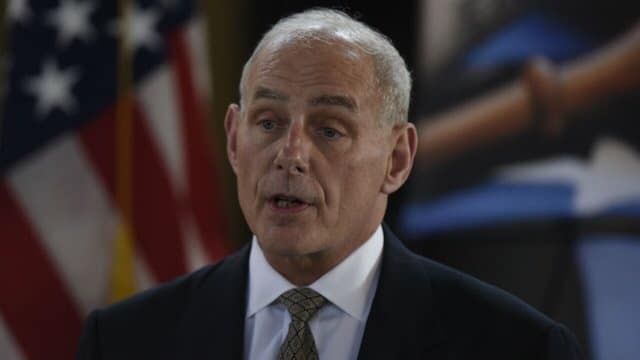 An appointment would continue the rapid rise of the young aide, 36, and install a chief who enjoys warm relations with some of the most important figures in President Donald Trump’s orbit: his eldest son, Don Jr., his eldest daughter, Ivanka, and his son-in-law, Jared Kushner. Ayers also enjoys support among the motley crew of outside advisers — including former campaign manager Corey Lewandowski — who have Trump’s ear but have clashed with Kelly as the former Marine general sought to regulate access to the president.

Ayers’ name surfaced as a possible replacement for Kelly this summer before the chief of staff announced he would be staying on in his role through 2020 in a bid to quash the persistent rumors of his imminent departure.

At the time, other leading candidates to succeed Kelly included Mick Mulvaney, who oversees both the Office of Management and Budget and the Consumer Financial Protection Bureau, and was lobbying for the job.

In the wake of the midterms, the administration is expected to go through another round of personnel turnover, and The Washington Post and Wall Street Journal recently reported that Kelly’s departure again may be imminent. A Kelly exit has also been tied to the potential departure of Homeland Security Secretary Kirstjen Nielsen, who the president has been itching to fire for months over what he sees as weak leadership on border security, according to a senior White House official.

Since Ayers was first floated as a possible chief of staff earlier this year, his stature has only grown in Trump’s eyes, according to several White House aides.

Two White House officials who were skeptical this summer of Ayers’ chances of becoming chief of staff both said this week that they think Trump is now serious about wanting to tap him. The officials both cited Ayers’ work on Pence’s midterm campaigning strategy, which they said impressed Trump.

In recent months, Ayers has traveled with Trump at least twice without Pence present, according to a senior White House official. One of those trips was an October swing to Florida and Ayers’ native Georgia to survey hurricane damage.

Trump and Ayers had already discussed the chief of staff job in the early summer, according to a former senior administration official, but at the time it was unclear when Kelly would depart. And Trump spent the summer asking friends, White House advisers and former aides: “What do we think about Nick?” — a tic he often employs when he is privately considering a staff shake-up.

Ayers first impressed Ivanka Trump, Kushner and then-Trump campaign chairman Steve Bannon as an aide to Pence during the presidential campaign. All three later encouraged Ayers to join the White House as a replacement for Pence’s first chief of staff, Josh Pitcock. If Ayers took over as chief of staff, he would be seen by some Trump allies as an upgrade over Kelly, since he has far greater political chops.

At the White House’s election night gathering last week, Kelly steered clear of the president and his family. Ayers, meanwhile, was seen huddling with the president. The pair discussed the chief of staff job, according to a person briefed on the night’s events. Ayers did not immediately respond to a call seeking comment.

With a fast-moving and fickle president, few things are certain, and Ayers’ ascension to the post remains far from a sure thing. Ayers, who has three young children, has weighed returning to the private sector in Georgia, where he’s held onto his house. There have also been discussions about moving him to Trump’s reelection campaign.