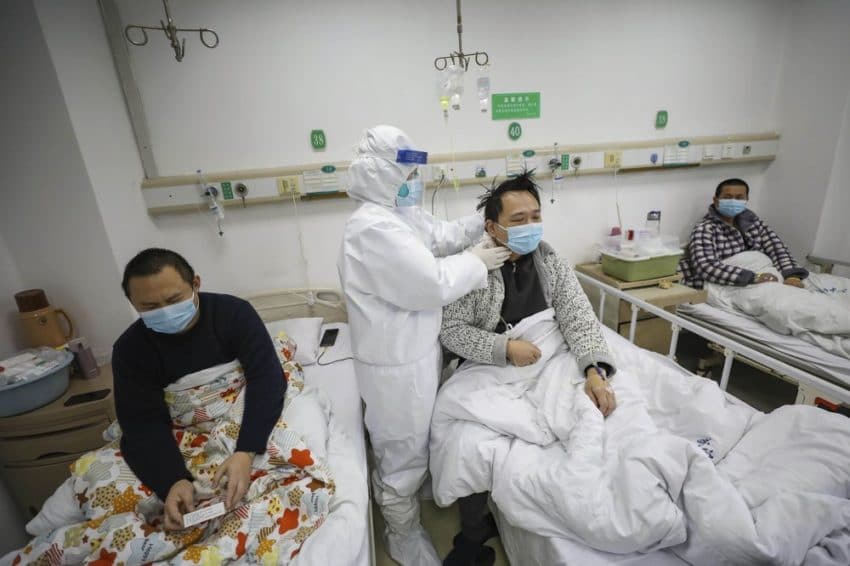 All times below are in Beijing time.

The chief executive of smartphone maker Xiaomi said the the disruption caused by the coronavirus outbreak could impact first-quarter sales, but CEO Lei Jun said Thursday that he believes demand will bounce back in the second and third quarters.

“Due to the outbreak of (the) virus, this year’s first quarter smartphone sales will face an impact, but we believe that in the second and third quarters they will strike back. Overall, the impact might not be that serious,” the CEO said, according to a translation of his comments from the company provided to CNBC’s Arjun Kharpal.

Japanese Prime Minister Shinzo Abe said Thursday that the cabinet will decide on Friday to spend 10.3 billion yen from the country’s budget to respond to the coronavirus, Reuters reported. Steps to tackle the outbreak will total 15.3 billion yen, he added after a meeting of a task force.

The coronavirus is causing travel demand to slump across the whole Asia-Pacific region, according to data released by travel analytics firm ForwardKeys on Thursday, with the region seeing a 10.5% slowdown in outbound travel bookings for March and April (excluding trips to and from China and Hong Kong).

As of February 9, the setback looks likely to be most marked in northeast Asia, where outbound bookings for March and April, are 17.1% behind where they were at the equivalent moment last year.

Global oil demand is now expected to see its first quarterly contraction in over a decade, according to the International Energy Agency (IEA), as the new coronavirus and widespread shutdown of China’s economy hits demand for crude.

Demand is now expected to fall by 435,000 barrels a day in the first quarter of 2020, down from the same period a year ago, and marking the first quarterly contraction in more than 10 years, the IEA said in its monthly oil market report Thursday.

In a Thursday press conference, China said it confirmed 15,152 new cases and 254 additional deaths. Those figures include the ones reported earlier by Hubei province under its new diagnosis methodology. (See 7:55 a.m. and 10:40 a.m. updates).

That brings the country’s total death toll to 1,367 as the number of people infected hit 59,804, according to the government.

A spokeswoman for the Shanghai Health Commission said at a press conference that the methodology for diagnosing coronavirus has not been changed in any Chinese provinces or municipalities except for Hubei.

Health workers in Hubei province began using a new method to diagnose the virus this week.

Previously, infections were only allowed to be confirmed with nucleic acid tests, which can take days to process, but Hubei province is now using CT scans which can diagnose the virus more quickly. — Wang, Cheng, Taylor

China’s Ministry of Foreign Affairs said there are no new cases of foreigners infected with the virus. It also said another foreign national had been discharged, bringing that total figure to eight cases. — Cheng

Hubei, the Chinese province hardest hit by the virus, extended shutdowns in the region, telling businesses to not resume work before Feb. 21. Authorities also said that school reopenings have been postponed, but did not specify a date.

As of 1:25 p.m., China’s National Health Commission had not yet released the death toll and number of infections nationwide.

This is the second day running that the numbers have been delayed. On Wednesday, the data was reported about two hours later than the usual release time of just before 8 a.m. Beijing time.

Figures published on Wednesday showed the nationwide death toll in the country from the coronavirus outbreak topped 1,100 as of Tuesday night.

Another 44 people on the Diamond Princess cruise ship have tested positive for the coronavirus, according to Japan’s health ministry. That brings the total to 218 infected among people on the ship.

The ship, currently docked off the coast of Japan and carrying more than 3,700 passengers and crew, has been quarantined since early February after a previous guest tested positive for the disease six days after disembarking.

A shakeup is occurring among senior ranks in the virus epicenter of Hubei, amid heavy criticism on how officials there have managed the outbreak.

It was a decision made by the central committee of China’s Communist Party, according to the report.

The Party Secretary of Jinan, Wang Zhonglin, is also set to replace Ma Guoqiang, the party secretary of Wuhan municipality.

The first batch of 1,400 personnel arrived in Wuhan on Thursday, the report said, adding the military has dispatched a total of three batches of more than 4,000 medical personnel. — Cheng

Hong Kong extended a suspension of schools for the third time since the Lunar New Year, with the exact date of resumption still unconfirmed.

Schools will use online learning platforms in the meantime, said Kevin Yeung, Hong Kong’s secretary for education, adding that students should try to stay home, and avoid crowded places.

Hong Kong’s tally of infected cases stands at 50, as of Wednesday. — Kam

Health authorities in Hubei province said Thursday that “clinically diagnosed” cases accounted for much of the increase in the “confirmed case” count, resulting in a surge in new confirmed cases for the prior day. (see 7:55 am update)

The change was made so that more patients could receive the same treatment as a confirmed case would, according to a CNBC translation of the official announcement’s Chinese text.

The online release cited a national-level virus response plan issued last week, which expanded the definition of clinically diagnosed cases in Hubei province to include suspected cases for whom CT scans showed indications of the disease. It was not immediately clear why Hubei was implementing the measures this week. — Cheng

United Airlines on Wednesday said it would extend cancellations of its China service until at least April 24, about a month later than the carrier previously planned, as coronavirus cases continue to climb. United normally operates 12 flights a day from its U.S. hubs to Beijing, Chengdu, Shanghai and Hong Kong and the carrier has more service to China than any other U.S. airline.

The extension follows a similar step American took a day earlier. “We will continue to monitor the situation in China and evaluate our schedule as we remain in close contact with the CDC and other public health experts around the globe,” United said in a statement. — Josephs

A cruise ship which was turned away by five countries on fears that someone aboard might be infected, was finally accepted by Cambodia. It landed in the country on Thursday, according to Reuters citing ship tracking data.

The MS Westerdam was rejected by Japan, Taiwan, Thailand, the Philippines and Guam, and has spent around two weeks at sea.

The CDC confirmed a new case in California, taking the total number of cases in the U.S. to 14. The patient is among a group under quarantine after they returned to the U.S. on a chartered flight from Hubei.

China’s Hubei province reported an additional 242 deaths and 14,840 new cases as of Feb. 12 — a sharp increase from the previous day. The province said it is starting to include “clinically diagnosed” cases in its figures and that 13,332 of the new cases fall under that classification.

The government said that a total of 1,310 people have died in the province and that 48,206 people have been infected in the region.

7:41 am: Singapore cases hit 50, one of the highest outside China

Singapore’s health ministry said as of Feb. 12, noon, the total number of confirmed infection cases hit 50, with three additional ones reported. The city-state has one of the highest number of reported cases of the virus, next to China and Japan, as well as more than 170 cases onboard a cruise ship that’s quarantined off Japan’s coast.

The health ministry said contact tracing for the confirmed cases is ongoing and that test results for 125 suspected cases are pending. Of the confirmed cases, more than half are a result of local transmissions where the affected individuals did not have any travel history or links to China. Singapore in recent days saw a surge in panic buying of groceries and other essential household items. —Roy Choudhury

All times below are in Eastern time.

Organizers of Mobile World Congress, the world’s largest trade show for the mobile phone industry, have canceled the conference slated to start in Barcelona in less than two weeks. Facebook and other major companies have pulled out of MWC in recent days amid growing fears over the outbreak.

“With due regard to the safe and healthy environment in Barcelona and the host country today, the GSMA has cancelled MWC Barcelona 2020 because the global concern regarding the coronavirus outbreak, travel concern and other circumstances, make it impossible for the GSMA to hold the event,” GSMA said in a statement. — Browne

IMF Managing Director Kristalina Georgieva told CNBC’s Sara Eisen on Wednesday the new coronavirus that started in China is “clearly more impactful” on the world economy than the 2002-2003 SARS epidemic. “China was different [then], the world was different,” said Georgieva, in an interview with Ivanka Trump from a State Department event on economic empowerment for women.

During the SARS outbreak, China was only 8% of the global economy, Georgieva pointed out. “Today, China manufactures 28%, with possible impact through value chains on other countries.” — Belvedere

11:50 am: CDC prepares for community outbreaks in US

The Centers for Disease Control and Prevention is preparing for the coronavirus, named COVID-19, to “take a foothold in the U.S.,” Dr. Nancy Messonnier, director of the CDC’s National Center for Immunization and Respiratory Diseases, told reporters.

“At some point, we are likely to see community spread in the U.S. or in other countries,” said Messonnier. “This will trigger a change in our response strategy.” — Lovelace