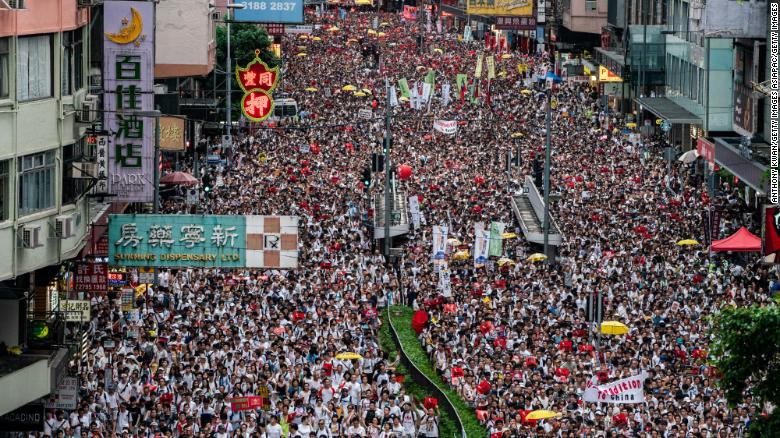 China has ratcheted up its rhetoric towards Hong Kong‘s months-long protest movement, warning that violent anti-government demonstrations were the first signs of “terrorism” and called for the “severe” punishment of perpetrators.

The escalating comments by Beijing’s top office on Hong Kong policy came a day after tense clashes between police and protesters, and came as thousands of demonstrators on Monday flooded the city’s international airport and prompted the cancellation of all flights.

“This wantonly tramples on Hong Kong’s rule of law and social order,” he added.  “Hong Kong has come to a critical juncture.”

Some Hong Kong legal experts say official descriptions of some protesters’ actions as “terrorism” could lead to the use of extensive anti-terror laws and powers against them.

Yang did not suggest that the Chinese government has any imminent plans to step in, but later on Monday, two state media outlets – the nationalistic tabloid Global Times and the People’s Daily – published a video of armoured personnel carriers purportedly driving towards Shenzhen, a city bordering the territory.

The PAP are assembling in Shenzhen, “a city bordering Hong Kong, in advance of apparent large-scale exercises”, the Global Times said.

The People’s Armed Police have been assembling in Shenzhen, a city bordering Hong Kong, in advance of apparent large-scale exercises, videos obtained by the Global Times have shown. http://bit.ly/2Z0g7nU 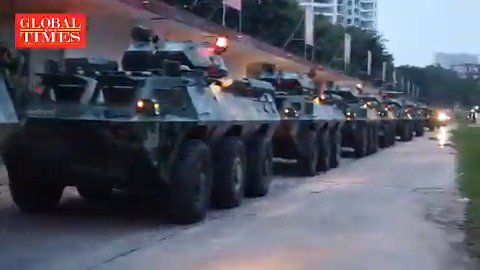 Hong Kong has witnessed tens week of mass anti-government protests that were sparked by a now-shelved extradition bill which would allow criminal suspects to be extradited to mainland China.

The demonstrations have since expanded into wider demands for democratic reforms, a call for Chief Executive Carrie Lam to resign and an independent inquiry into police conduct during the demonstrations.

On Sunday, Hong Kong police fired volleys of tear gas at demonstrators after denying their requests for permits to stage a march. Many people were arrested, including some who were taken away bloodied after being beaten with batons. Authorities said one police officer was taken to hospital after being hit with a petrol bomb hurled by protesters.

In his comments, Yang focused on the violent behaviour of a “tiny minority”, which he condemned as “a serious challenge to Hong Kong’s prosperity and stability.”

“Such violent crimes must be resolutely cracked down upon in accordance with the law,” he said, adding that Beijing supported Hong Kong’s police and judiciary in “bringing criminals to justice as soon as possible.”

Earlier this month, Beijing admitted Hong Kong is facing its worst crisis since it returned to China from British rule in 1997.

“Hong Kong’s crisis … has continued for 60 days, and is getting worse and worse,” Zhang Xiaoming, the head of the Hong Kong and Macau Affairs office, said during a meeting in the southern Chinese city of Shenzhen.

“Violent activities are intensifying and the impact on society is spreading wider. It can be said that Hong Kong is now facing the most severe situation since its handover,” he said.

Zhang made the comments during a forum held to discuss the political crisis in Hong Kong which included Hong Kong delegates to China’s parliament, the National People’s Congress and China’s main consultative body, the CPPCC. No opposition democratic figures or protest representatives were invited.

At the time, no specific mention was made of deploying the PLA, with Zhang cited as saying Beijing remained confident in the Hong Kong government and local police.

But in separate comments early last week, Yang had warned protesters not to “misread” Beijing’s position and told them not to “mistake restraint for weakness”.

“We would like to make it clear to the very small group of unscrupulous and violent criminals and the dirty forces behind them: Those who play with fire will perish by it,” he said. “As for their punishment, it’s only a matter of time.” 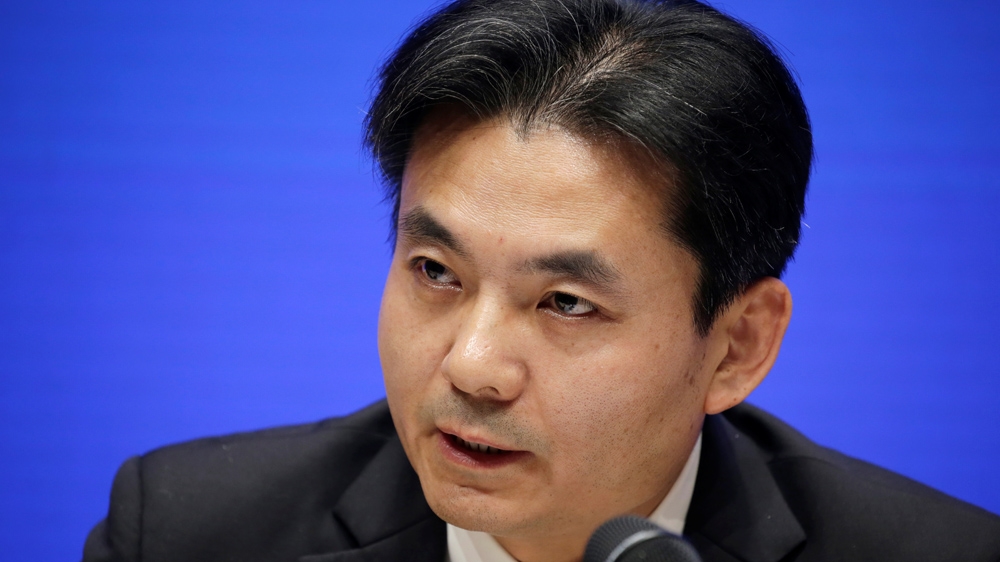 China has also accussed the United States of inciting violent chaos and warned against interference.

“We can see that US officials are even behind such incidents,” foreign ministry spokeswoman Hua Chunying said at a regular press briefing in late July.

Hua, asked about criticism of violence by the US and Hong Kong’s former colonial ruler, Britain, said China would not tolerate any interference.

“The US should know one thing, that Hong Kong is China’s Hong Kong, and we do not allow any foreign interference,” she said. “We advise the US to withdraw their black hands.”

The government has also requested the UK to stay out of the conflict, especially after British Foreign Secretary Dominic Raab called for an independent investigation into the protests during a phone call with Lam.

“It is simply wrong for the British government to directly call Hong Kong’s Chief Executive to exert pressure,” Chinese foreign ministry spokeswoman Hua Chunying said in a statement on Saturday.

“The Chinese side seriously urges the UK to stop its interference in China’s internal affairs and stop making random and inflammatory accusations on Hong Kong,” she said, adding that Hong Kong was no longer a British colony and the UK has no supervisory rights.

Hong Kong’s protests pose a major challenge to Chinese President Xi Jinping who is grappling with a trade war with the US and a slowing economy. 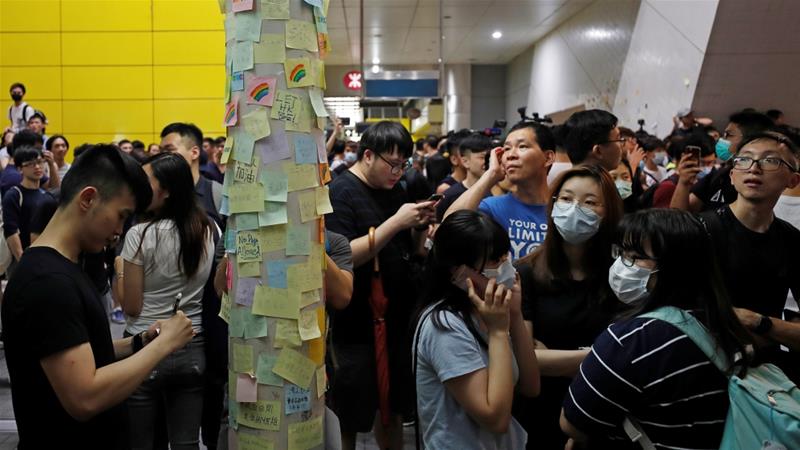 When will Hong Kong protests end?