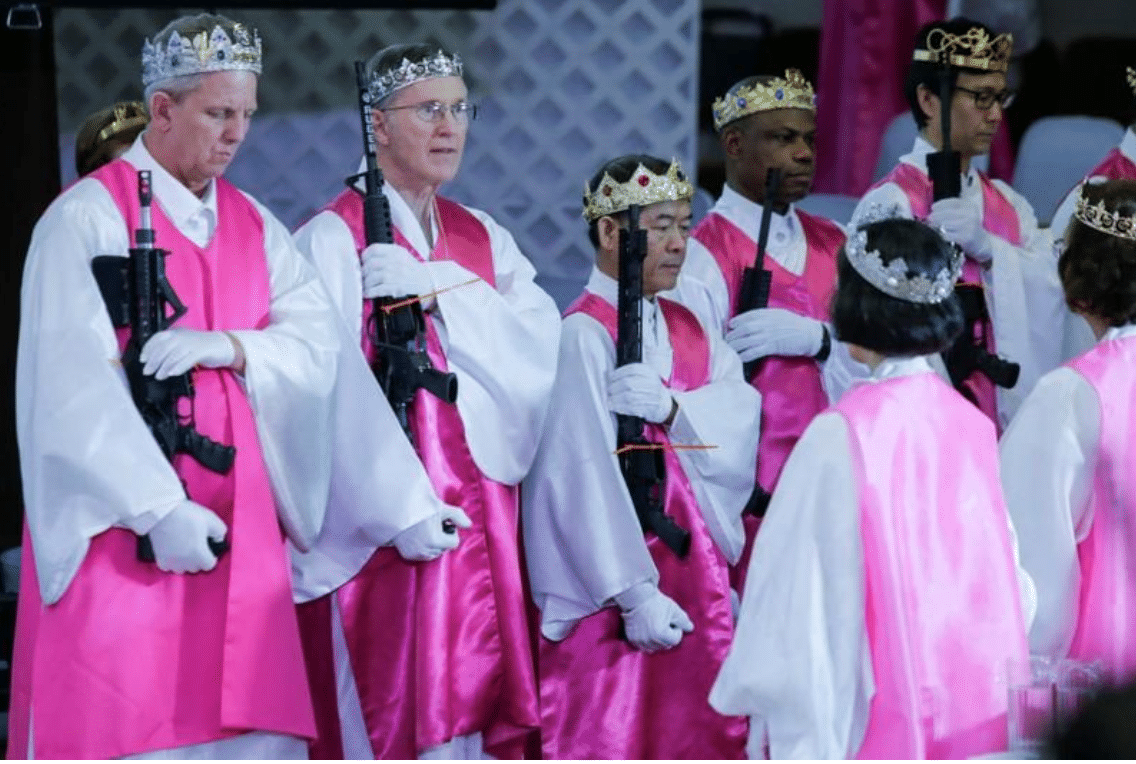 Hundreds of couples toting AR-15 rifles packed a Unification church in Pennsylvania on Wednesday to have their marriages blessed and their weapons celebrated as “rods of iron” that could have saved lives in a recent Florida school shooting.

Women dressed in white and men in dark suits gripped the guns, which they had been urged to bring unloaded to the church in the rural Pocono Mountains, about 100 miles (160 km) north of Philadelphia. Many celebrants wore crowns – some made of bullets – while church officials dressed in flowing bright pink and white garments to go with their armaments.

Reverend Hyung Jin “Sean” Moon, leader of the church after the death of his father and church founder, the Reverend Sun Myung Moon, blessed the roughly 250 couples at the service, a church spokesman said.

The Feb. 28 marriage blessing ceremony had been planned long before a man with an AR-15 assault-style rifle massacred 17 students and school staff in Parkland, Florida, on Feb. 14, the spokesman said.

Students from an elementary school near the church were relocated for the day to distance them from the gun-toting couples at the ceremony, according to the Wallenpaupack School District website.

Moon said in a statement that the staff of the Florida school should have been armed, an option President Donald Trump has said should be explored nationwide and which teacher unions have criticized.

“Each of us is called to use the power of the ‘rod of iron’ not to arm or oppress as has been done in satanic kingdoms of this world, but to protect God’s children,” he said, citing the Book of Revelation in the Bible.

“If the football coach who rushed into the building to defend students from the shooter with his own body had been allowed to carry a firearm, many lives, including his own, could have been saved,” Moon’s statement said.

The Pennsylvania school district three years ago called off classes during the massive manhunt for survivalist Eric Frein, who police said used an AK-47-style weapon to ambush a Pennsylvania state trooper barracks and then fled into the mountains.