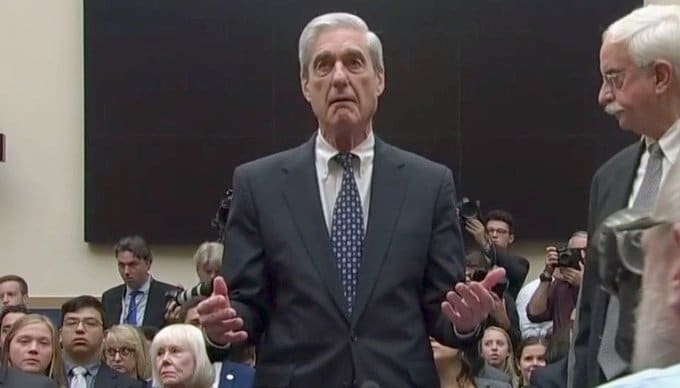 MONTAGE: CONFUSED-LOOKING MUELLER REPEATEDLY ASKS FOR QUESTIONS TO BE REPEATED

‘Can you repeat the question, sir?

Mueller, who is often celebrated in the media for laser-like thinking, had to ask lawmakers to regularly repeat their questions, seemingly struggling to pay attention.

At other points, Mueller got confused about whether the members of Congress were asking him questions or if they were reading from his own report.

In just the first 90 minutes of the hearing, Mueller needed help understanding questions more than 10 times.

In one such exchange, Mueller — under questioning from Rep. James Sensenbrenner (R-Wisc.) — asked: “And where are you reading from on that?”

“I’m reading from my own question” the lawmaker reminded him.

“Then can you repeat it?” Mueller asked, eliciting laughter from the audience.

In another painful episode, Mueller had to ask Rep. Sheila Jackson Lee three times to clarify and restate her question.

Under questioning from Rep. Matt Gaetz (R-Fla.), Mueller failed to follow a question that was merely 14 words long: “Attorney #2 in the Inspector General’s report and Strzok both worked on your team, didn’t they?”

To see more, check out the montage above.

Editor’s Note: We will be updating this post, and this montage, as the hearing progresses.

— Mueller: Evidence ‘Did Not Establish’ a Trump, Russia Conspiracy

— MSNBC Panel on Mueller Testimony: ‘Very Ineffective Defense of His Own Work’

— Supercut: Robert Mueller Will Not Be Answering Your Questions