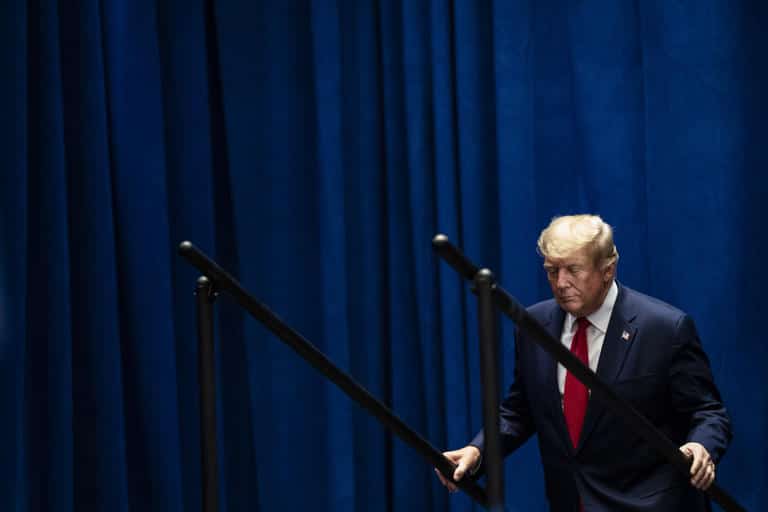 The Justice Department is investigating President Donald Trump’s actions as part of its criminal probe of efforts to overturn the 2020 election results, according to four people familiar with the matter.

Prosecutors who are questioning witnesses before a grand jury — including two top aides to Vice President Mike Pence — have asked in recent days about conversations with Trump, his lawyers, and others in his inner circle who sought to substitute Trump allies for certified electors from some states Joe Biden won, according to two people familiar with the matter. Both spoke on the condition of anonymity to discuss an ongoing investigation.

The prosecutors have asked hours of detailed questions about meetings Trump led in December 2020 and January 2021; his pressure campaign on Pence to overturn the election; and what instructions Trump gave his lawyers and advisers about fake electors and sending electors back to the states, the people said. Some of the questions focused directly on the extent of Trump’s involvement in the fake-elector effort led by his outside lawyers, including John Eastman and Rudy Giuliani, these people said.

In addition, Justice Department investigators in April received phone records of key officials and aides in the Trump administration, including his former chief of staff, Mark Meadows, according to two people familiar with the matter. That effort is another indicator of how expansive the Jan. 6 probe had become, well before the high-profile, televised House hearings in June and July on the subject

A look at the Jan. 6 hearings so far — and what comes next

The Washington Post and other news organizations have previously written that the Justice Department is examining the conduct of Eastman, Giuliani and others in Trump’s orbit. But the degree of prosecutors’ interest in Trump’s actions has not been previously reported, nor has the review of senior Trump aides’ phone records.

A Trump spokesman did not immediately respond to a request for comment. A Justice Department spokesman and a lawyer for Meadows both declined to comment.

The revelations raise the stakes of an already politically fraught probe involving a former president, still central to his party’s fortunes, who has survived previous investigations and two impeachments. Long before the Jan. 6 investigation, Trump spent years railing against the Justice Department and the FBI; the investigation moving closer to him will probably intensify that antagonism.

Federal criminal investigations are by design opaque, and probes involving political figures are among the most closely held secrets at the Justice Department. Many end without criminal charges. The lack of observable investigative activity involving Trump and his White House for more than a year after the Jan. 6 attack has fueled criticism, particularly from the left, that the Justice Department is not pursuing the case aggressively enough.

In trying to understand how and why Trump partisans and lawyers sought to change the outcome of the election, one person familiar with the probe said, investigators also want to understand, at a minimum, what Trump told his lawyers and senior officials to do. Any investigation surrounding the effort to undo the results of the election must navigate complex issues of First Amendment-protected political activity and when or whether a person’s speech could become part of an alleged conspiracy in support of a coup.

Many elements of the sprawling Jan. 6 criminal investigation have remained under wraps. But in recent weeks the public pace of the work has increased, with a fresh round of subpoenas, search warrants and interviews. Pence’s former chief of staff, Marc Short, and lawyer, Greg Jacob, appeared before the grand jury in downtown Washington in recent days, according to the people familiar with the investigation. Both men declined to comment. © Jabin Botsford/APFormer Fox News politics editor Chris Stirewalt is sworn in at a hearing of the House panel investigating the Capitol riot.

The Justice Department efforts are separate from the inquiry underway by the House committee, which has sought to portray Trump as responsible for inciting the Capitol riot and for being derelict in his duty for refusing to stop it. Both Short and Jacob have testified before the committee, telling lawmakers that Pence resisted Trump’s attempts to enlist him in the cause.

Unlike the Justice Department, the House panel does not have the power to launch criminal investigations or charge anyone with wrongdoing.

More than 840 suspects have been charged in the Jan. 6 Capitol riot

The Justice Department probe began amid the smoke, blood and chaos at the Capitol and has led to criminal charges against more than 840 individuals, expanding to include an examination of events that occurred elsewhere in the days and weeks before the attack — including at the White House, in state capitols and at a D.C. hotel.

There are two principal tracks of the investigation that could ultimately lead to additional scrutiny of Trump, two people familiar with the situation said, also speaking on the condition of anonymity to discuss an ongoing investigation.

The first centers on seditious conspiracy and conspiracy to obstruct a government proceeding, the type of charges already filed against individuals who stormed the Capitol on Jan. 6 and on two leaders of far-right groups, Stewart Rhodes and Henry “Enrique” Tarrio, who did not breach the Capitol but were allegedly involved in planning the day’s events.

The second involves potential fraud associated with the false-electors scheme or with pressure Trump and his allies allegedly put on the Justice Department and others to falsely claim that the election was rigged and votes were fraudulently cast.

Recent subpoenas obtained by The Post show that two Arizona state legislators were ordered to turn over communications with “any member, employee, or agent of Donald J. Trump or any organization advocating in favor of the 2020 re-election of Donald J. Trump, including ‘Donald J. Trump for President, Inc.’ ”

No former president has ever been charged with a crime in the country’s history. In cases when investigators found evidence suggesting a president engaged in criminal conduct, as with Richard M. Nixon and Bill Clinton, investigators and successive administrations concluded it was better to grant immunity or forgo prosecution. One goal was to avoid appearing to use government power to punish political enemies and assure the tradition of a peaceful transfer of power.

Attorney General Merrick Garland has vowed that the Jan. 6 investigation will follow the facts wherever they lead and said that no one is exempt or above scrutiny, while refusing to divulge information outside of court filings.

Garland told NBC News in a Tuesday interview that the department pursues justice “without fear or favor. We intend to hold everyone, anyone, who was criminally responsible for the events surrounding January 6th, for any attempt to interfere with the lawful transfer of power from one administration to another, accountable — that’s what we do. We don’t pay any attention to other issues with respect to that.” The Jan. 6 investigation is by some measures the largest ever undertaken by the Justice Department. While investigators in nearly every part of the country have been involved, the lion’s share of the work is being done by three offices: the U.S. attorney’s office in the District of Columbia, and the criminal and national security divisions at department headquarters.

In the probe’s first year, prosecutors focused largely on the people who breached the Capitol, some of them violently, charging hundreds with interfering with or assaulting police or obstructing an official proceeding.

This year, the fake-elector scheme has become a major focus of the Justice Department inquiry. After Trump lost the election, lawyers and others close to him urged GOP officials in key states to submit alternate and illegitimate slates of electors to reject the results of the state vote totals. Those would-be electors were aided in their effort by Trump campaign officials and Giuliani, who said publicly that the rival slates were necessary and appropriate, and has been described as overseeing the strategy.

Last month, federal agents fanned out in multiple states to serve grand jury subpoenas, execute search warrants and interview witnesses — a significant escalation of overt investigative activity. As part of that effort, agents searched Eastman’s electronic devices, and conducted a search at the home of Jeffrey Clark, a former Justice Department official who enthusiastically embraced some of Trump’s last-ditch efforts to stop Biden from becoming president. Many of those who received subpoenas were told specifically to turn over their communications with Giuliani.

The Justice Department inspector general is also an important player in the investigation, as it examines Clark’s role as a department official in allegedly furthering the efforts.

In a call on Dec. 27, 2020, witnesses have said, Trump told acting attorney general Jeffrey Rosen that he wanted his Justice Department to say there was significant election fraud, and said he was poised to oust Rosen and replace him with Clark, who was willing to make that assertion.

Rosen told Trump that the Justice Department could not “flip a switch and change the election,” according to notes of the conversation cited by the Senate Judiciary Committee.

“I don’t expect you to do that,” Trump responded, according to the notes. “Just say the election was corrupt and leave the rest to me and the Republican congressmen.”

Jacqueline Alemany and Rosalind S. Helderman contributed to this report.