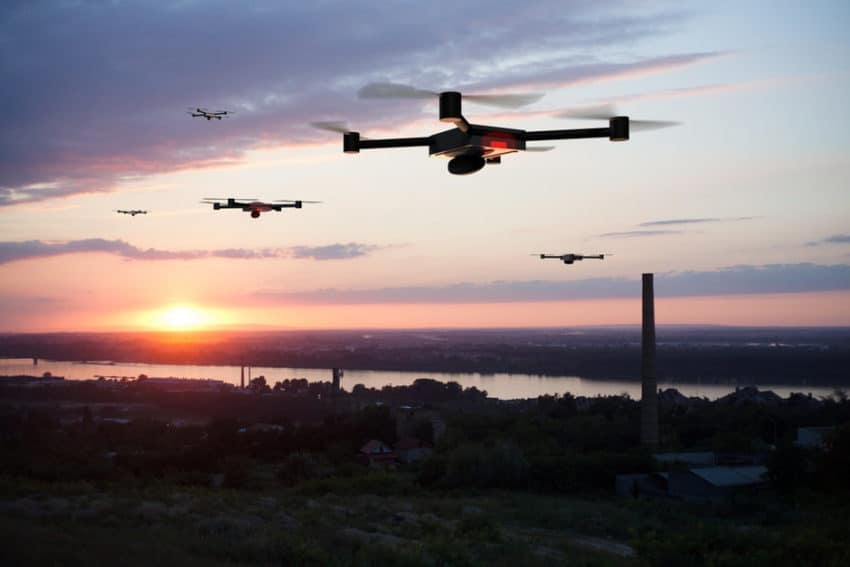 MIAMI — Last month, police departments in Daytona Beach, Fla., and Connecticut unveiled what was initially touted as a potential new tool against a pandemic: drones capable of taking a person’s temperature from 300 feet in the air.

Both agencies quickly backtracked on using the machines to track the novel coronavirus after backlash from civil liberty groups warning about the implications of a “Big Doctor” in the sky singling out people simply for running a fever, when it might be nothing more than a more common and less deadly flu.

They raised other concerns as well: Are cops supposed to be monitoring health information that is private under federal law? Are drone readings, even with sophisticated infrared sensors, a trustworthy way to protect public health without violating individual rights?

“It collects data and information on everybody without guaranteeing it’s accurate,” said Kara Gross, legislative director of the American Civil Liberties Union of Florida. “Not only that, the other people around the person may have COVID. So the information could be bad and inaccurate.”

The drones are just one example of what some civil rights advocates fear could be a looming wave of intrusive technology and constitutionally questionable measures pushed by governments — from local to state to federal — under the mission of protecting a fearful community.

Already, they point out, thermal cameras have been installed at the criminal courthouse in Miami; governors in Massachusetts and Alabama have signed executive orders telling local health agencies to give first responders the addresses of anyone who has tested positive for COVID-19. Google and Apple are working on cellphone applications that could inform someone on the other end of a call that they’re speaking with a virus carrier.

Authoritarian countries like China, already with poor human rights records, have tightened the screws further: Chinese who don’t agree to constant surveillance are forced to lock down in their homes, or face arrest.

It seems unlikely to go that far in the United States, where President Donald Trump is pressing to reopen the economy. But Gross, for one, pointed to 2001, when less than two months after terrorists struck New York City and Washington, D.C., Congress enacted the Patriot Act, which greatly expanded the nation’s surveillance laws, while reducing checks and balances like judicial oversight — despite a litany of concerns raised about an erosion of civil rights.

“We need to be very careful given our past history,” Gross said.

SHARING THE ADDRESSES OF THE SICK

The initial pandemic protections from government, for the most part, have been rolled out as temporary measures — like stay-home and social distancing orders — under guidance from public health authorities. Many of them, polls show, have broad public support, particularly in cities that have become virus hot zones — though there has been pushback in some places, most notably Michigan, where protesters, some armed with high-powered rifles, swarmed the Capitol in opposition of a statewide shutdown.

And constitutional experts say, courts have historically sided with governments in the early stages of emergencies and health crises, and have been receptive to arguments that there is a compelling interest for governments to quash some privacy laws for the betterment of society. Over time, they say, the compelling interest will fade. But in the first months, the closing down of businesses and curfews and stay-at-home orders are likely to remain in place without much pushback from the courts.

But in March, governors in Massachusetts and Alabama pushed the privacy boundaries further, endorsing measures demanding that local boards of health release the addresses of contagion cases to first responders.

Monica Bharel, commissioner of the Massachusetts Department of Public Health, defended the measures, saying the disclosures would only be used during 911 calls and that the information would be discarded after the state’s emergency declaration came to an end.

It’s “to ensure effective and continued operation of public health and safety services,” she told the local news website Patch.

“It seems kind of intrusive. It’s private health information that is going to be shared and stored. It’s sort of like what’s happening in China,” Kruckenberg said. “I’m worried they’re going to say things like stay home. Or you have to stay home or you’re subject to arrest.”

During the first week of April, Daytona Beach Police invited the media to the unveiling of a quartet of drones purchased through a combination of confiscated and federal money. One of those drones, Sgt Tim Ehrenfauker told the Daytona Beach News-Journal, had the ability to fly within a few hundred feet of someone in a crowd and detect that person’s temperature.

“If I zoom in on a crowd of people and somebody in there had a … everybody was 98.6 degrees, or whatever the new normal is 97, and somebody has a 102 fever, he would be red in a crowd of orange people,” Ehrenfauker told the paper.

Two weeks later, police in Westport, Connecticut, a community hit hard by the virus that is a short distance from the pandemic epicenter in New York City, unveiled the same initiative.

But after public backlash, Westport police killed the plan before it was activated. And police in Daytona Beach clarified that the technology hasn’t been used to seek out random fevers in public spaces. Daytona Beach Police spokesman Messod Bendayon conceded the drone had been used but not to search public spaces for random fevers. South Florida law enforcement agencies contacted by the Miami Herald say they have no plans to use similar technology for COVID-19 monitoring.

“When we use the drone, obviously, the infrared is on,” Bendayon said. “It can read people’s temperatures. But using it for that purpose, no.”

“Your department’s use of drones to conduct mass surveillance of people’s temperatures with the express purpose of discerning whether they may have a virus is plainly unconstitutional,” Kruckenberg and fellow attorney Mark Chenoweth said. “NCLA therefore urges the department to immediately suspend use of such drones.”

Westport grounded its plan after concerns were raised by the American Civil Liberties Union of Connecticut, which described it as an example of “privacy-invading companies using COVID-19 as a chance to market their products and create future business opportunities,” according to the Hartford Courant.

“Any new surveillance measure that isn’t being advocated for by public health professionals and restricted solely for public health use should be promptly rejected, and we are naturally skeptical of towns announcing these kinds of partnerships without information about who is operating the drones, what data they will collect, or how, or if that data will be stored, shared, or sold,” David McGuire, executive director of the ACLU of Connecticut, told the Courant.

Draganfly, the Canadian company that built the drone, offered literature that said the technology could also take heart and respiratory rates, find people sneezing and coughing in crowds and detect “infectious conditions from a distance of 190 feet.”

Gross, of Florida’s ACLU, called the drones an example of over-reach by policing agencies and expressed concern that private companies looking to turn a profit may keep pushing technologies that would allow governments to more easily monitor citizens for a host of reasons. She warned that more oversight would likely be necessary in the near future to push back on privacy challenges from private firms and federal and local governments.

“It not only invades someone’s privacy. We have no idea how that information will be used,” she said. “The answer is not to just throw drones up in the sky and collect information on everyone. We need to be extremely careful that any efforts to expand the government’s authority and the checks and balances are not an over-reach.”