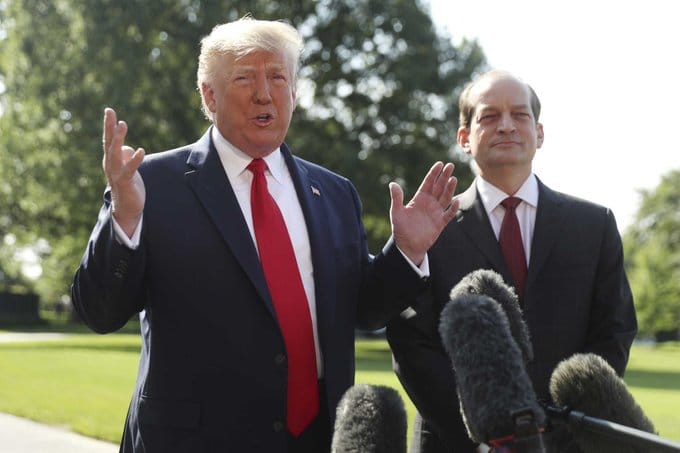 Labor Secretary Alex Acosta said Friday he will resign amid controversy over the way he handled a sex crimes case against wealthy businessman Jeffrey Epstein a decade ago when he was U.S. attorney for southern Florida.

Acosta made the announcement to reporters while standing next to President Donald Trump outside the White House. Trump said Acosta had called him Friday morning and that it was Acosta’s decision to quit.

“This was him, not me, because I’m with him,” Trump said in a lengthy exchange with the press before departing the White House en route to events in Wisconsin and Ohio. “I said, ‘You don’t have to do this.’”

Acosta told reporters that he did not want his involvement in Epstein’s controversy to overshadow the administration’s accomplishments. Acosta said he will officially resign a week after his announcement. Deputy Labor Secretary Patrick Pizzella will take his place in an acting capacity, Trump said.

Alex Acosta informed me this morning that he felt the constant drumbeat of press about a prosecution which took place under his watch more than 12 years ago was bad for the Administration, which he so strongly believes in, and he graciously tendered his resignation….

….Alex was a great Secretary of Labor and his service is truly appreciated. He will be replaced on an acting basis by Pat Pizzella, the current Deputy Secretary.

In his resignation letter to Trump, Acosta said, “It has meant so much to me that you have offered your steadfast support in our private discussions and in your public remarks.” But “your agenda, putting the American people first, must avoid any distractions,” Acosta wrote.

The resignation came two days after Acosta gave a news conference in which he defended a controversial non-prosecution agreement he had made with Epstein’s lawyers in 2007, when Acosta was the top prosecutor in Miami.

The issue resurfaced on July 6, when the politically connected Epstein, whose friends have included Trump and former President Bill Clinton, was arrested on sex trafficking charges by federal prosecutors in New York.

President Trump: I told Acosta he did not have to resign

Epstein had long been under investigation by both federal and local law enforcement for sex crimes against underage girls that took place from 2002 to 2005 in New York and Florida.

Acosta, as a U.S. attorney, struck a secret plea deal with Epstein allowing him to avoid federal prosecution on similar charges.

Epstein was required to register as a sex offender and ended up serving a custodial sentence of 13 months in jail, where he was allowed out during the day on work release.

Even Acosta expressed frustration with the lax punishment Epstein received. “The work release was complete BS,” Acosta said in Wednesday’s news conference. He said that his office intended for Epstein to carry out all of his sentence, which he expected to be 18 months, behind bars.

In those remarks, Acosta maintained that his office at the time was “trying to do the right thing for these victims.”

“We believe we proceeded appropriately,” Acosta said. “We did what we did because we wanted to see Epstein go to jail.”

The non-prosecution agreement struck between Epstein and Acosta’s office was also concealed from the victims in the case. A Florida judge ruled in February 2019 that the team of Miami prosecutors led by Acosta broke the lawwhen they hid the deal from the more than 30 underage victims who had allegedly been sexually abused by Epstein.

At the time, then-press secretary Sarah Huckabee Sanders told reporters that the administration was “looking into the matter” but did not speculate on what was in store for Acosta.

“My understanding is that’s a very complicated case … but that they made the best possible decision and deal they could have gotten at that time,” she said.

On Tuesday, Acosta tried to justify past decisions in the Epstein case. “The crimes committed by Epstein are horrific, and I am pleased that NY prosecutors are moving forward with a case based on new evidence,” Acosta tweeted.

“With the evidence available more than a decade ago, federal prosecutors insisted that Epstein go to jail, register as a sex offender and put the world on notice that he was a sexual predator.”

“Now that new evidence and additional testimony is available, the NY prosecution offers an important opportunity to more fully bring him to justice.”

Acosta was appointed United States Attorney for the Southern District of Florida in 2005 by George W. Bush. He previously served on the National Labor Relations Board and led the civil rights division of the Justice Department under Bush.

He was dean of the law school at Florida International University when he was tapped as Labor secretary by Trump in 2017. He was the first Hispanic in the Cabinet and the only one serving as of January 2019.

“He has had a tremendous career,” Trump said at a press conference announcing the appointment. “I’ve wished him the best; we just spoke. I think he’ll be a tremendous secretary of Labor.”