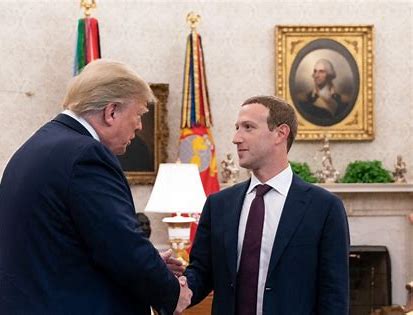 But, the board said, the indefinite time frame of the suspension “was not appropriate.” The board effectively punted the decision on the length of the suspension back to Facebook, saying it “insists” the company “review this matter to determine and justify a proportionate response that is consistent with the rules that are applied to other users of its platform.”

The board asked that Facebook complete the review within six months and made suggestions for how to create clear policies that balance public safety and freedom of expression.

“We will now consider the board’s decision and determine an action that is clear and proportionate,” Facebook said in a blog post following the announcement. “In the meantime, Mr. Trump’s accounts remain suspended.”

Trump responded to the decision in statement and claimed his free speech rights had been violated by Facebook and other tech companies that banned him from their respective online platforms. His statement also falsely implied that he won the election.

“What Facebook, Twitter, and Google have done is a total disgrace and an embarrassment to our Country,” Trump’s statement said. “Free Speech has been taken away from the President of the United States because the Radical Left Lunatics are afraid of the truth, but the truth will come out anyway, bigger and stronger than ever before. The People of our Country will not stand for it! These corrupt social media companies must pay a political price, and must never again be allowed to destroy and decimate our Electoral Process.”

Facebook suspended Trump’s accounts following the Jan. 6 insurrection on the U.S. Capitol. The suspension was Facebook’s most aggressive action against Trump during his four-year term.

“We believe the risks of allowing the President to continue to use our service during this period are simply too great,” Facebook CEO Mark Zuckerberg wrote in a post on his Facebook page at the time.

Facebook referred the decision to its oversight board a few weeks later, saying that given the significance of the decision, “we think it is important for the board to review it and reach an independent judgment on whether it should be upheld.”

The decision to uphold Trump’s suspension is the most significant action taken thus far by the oversight board, which was launched in October as a de facto “supreme court” for the company’s content moderation decisions.

The board is an independent body made up of civic, technological, free speech, journalism and human rights experts from around the world. A randomly selected but diverse group of five board members were chosen to deliberate on the case, and the recommendation had to be voted favorably by a majority of the full 20-member oversight board.

Facebook previously agreed to abide by the oversight board’s rulings, even though Zuckerberg still has undisputed control of the company, with majority voting control over the company’s shares.

The board found that Trump had “severely violated” Facebook’s community standards with his posts on Jan. 6. But it also said the platform “seeks to avoid its responsibilities” by applying a vague penalty and then referring it to the board to review.

Trump’s declarations on Facebook, “We love you. You’re very special,” referring to the people who rioted around the U.S. Capitol, calling the rioters “great patriots” and telling them to “remember this day forever,” violated Facebook’s rules that prohibit praise of people engaged in violence, the board wrote.

“The Board found that, in maintaining an unfounded narrative of electoral fraud and persistent calls to action, Mr. Trump created an environment where a serious risk of violence was possible,” the board wrote, adding that when Trump posted his statements, “there was a clear, immediate risk of harm and his words of support for those involved in the riots legitimized their violent actions.”

But Facebook’s decision to make the ban indefinite was not justified, the board found, since it “did not follow a clear, published procedure” in doing so.

“In applying a vague, standardless penalty and then referring this case to the Board to resolve, Facebook seeks to avoid its responsibilities,” the board wrote. “The Board declines Facebook’s request and insists that Facebook apply and justify a defined penalty.”

On a call with reporters following the decision, oversight board co-chair Helle Thorning-Schmidt said the group was basically “telling Facebook that they can’t just invent new unwritten rules” when they find it convenient. Co-chair Michael McConnell said it’s far from the first time Facebook has made up ad hoc rules.

The co-chairs acknowledged that Facebook’s decision may again reach their desks, but McConnell said that if Facebook follows its recommendations for creating clear guidelines, the decision may be more straightforward.

The board said that though Facebook should apply the same rules to all members, the company should take context into account in assessing harm, including when posts are made by “influential users.” It added that newsworthiness considerations “should not take priority when urgent action is needed to prevent significant harm.”

Facebook should publicly explain the rules it uses to suspend users for definite periods of time and assess whether the risk of harm has changed before lifting the suspension, the board wrote. Still, the board said account or page deletion could be appropriate in some circumstances.