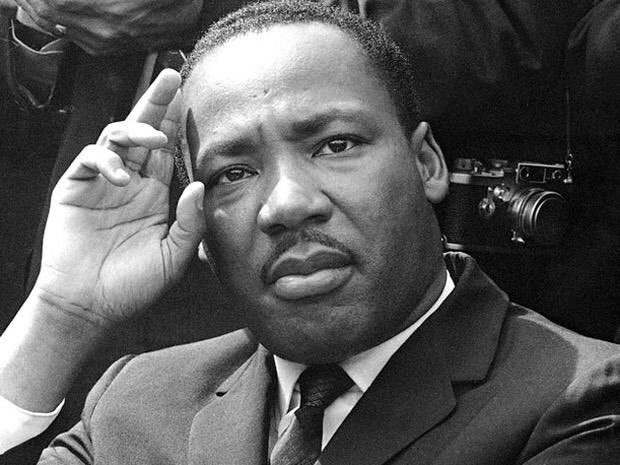 The MLK tapes: Secret FBI recordings accuse Martin Luther King Jr of watching and laughing as a pastor raped a woman, having 40 extramarital affairs – and they are under lock in a U.S. archive, claims author

Secret FBI tapes that accuse Martin Luther King Jr of having extramarital affairs with ’40 to 45 women’ and even claim he ‘looked on and laughed’ as a pastor friend raped a parishioner exist, an author has claimed.

The civil rights hero was also heard allegedly joking he was the founder of the ‘International Association for the Advancement of P***y-Eaters’ on an agency recording that was obtained by bugging his room, according to the sensational claims made by biographer David Garrow – a Pulitzer prize-winning author and biographer of MLK.

Writing in British magazine Standpoint, Garrow says that the shocking files could lead to a ‘painful historical reckoning’ for the man who is celebrated across the world for his campaign against racial injustice.

Along with many US civil rights figures, King was subject to an FBI campaign of surveillance ordered by Director J Edgar Hoover in an effort to undermine his power amid fears he could have links to the Communist Party. 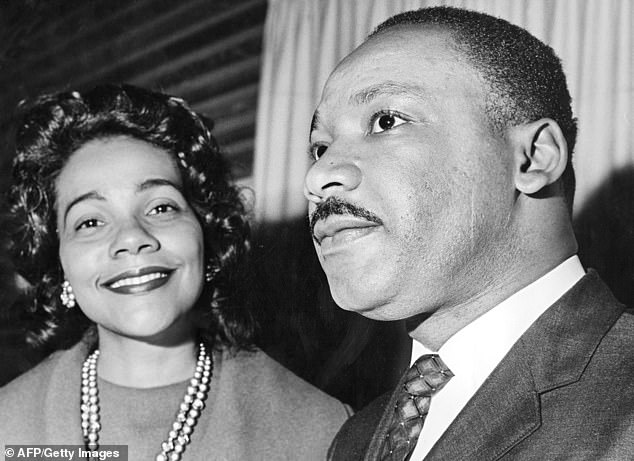 Martin Luther King, who married Coretta Scott in 1953, is said to have carried out numerous affairs with dozens of women during his lifetime 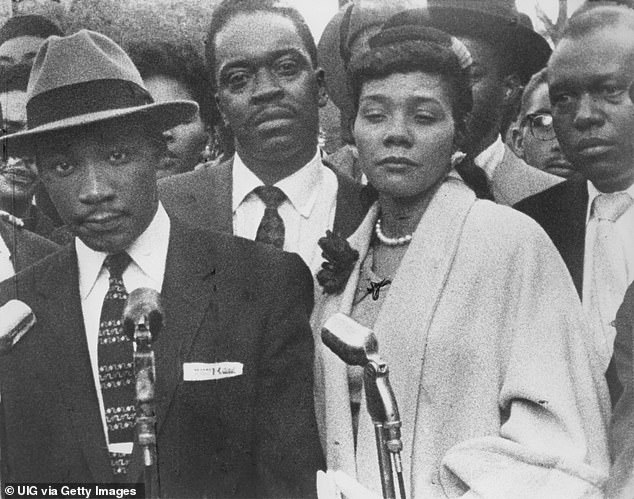 The FBI surveillance tapes detailing his indiscretions are being held in a vault at the U.S. National Archives and are not due for release until 2027.

How J. Edgar Hoover kept incriminating evidence against the great and the good of American society

The first FBI director was responsible for making the intelligence service what it is today but used tactics which many thought were unethical.

Hoover was mainly concerned about what he considered to be ‘subversion’ and tens of thousands of suspected radicals were interviewed under his directorship.

Some believe Hoover exaggerated the potential dangers of these subversive characters.

He has also been criticised for going too far and overstepping his brief.

Hoover founded a covert ‘dirty tricks’ program under the name COINTELPRO to disrupt the Communist Party.

He spied on the celebrities using methods such as wire-tapping, infiltration, forging documents and spreading false rumours.

Some have even alleged COINTELPRO incited violence and arranged murders.

In one particularly controversial incident, a white civil rights worker was killed by a member of the Ku Klux Klan who happened to also be an FBI informant.

The FBI then spread rumours that she was a Communist and abandoned her children to have sex with black people involved in the civil rights movement.

Even President Nixon said he did not fire Hoover because he feared he had too much dirt on him.

Hoover’s actions came to be seen as abuses of power and the tenure of the FBI director was later limited to ten years.

But David Garrow, a biographer of King who won a Pulitzer Prize for his 1987 book Bearing the Cross about the Baptist minister, has unearthed the FBI summaries of the various incidents.

In an article to be published in Standpoint, Garrow tells how the FBI planted transmitters in two lamps in hotel rooms booked by King in January 1964, according to The Sunday Times.

FBI director J Edgar Hoover ordered the surveillance of King in an effort to undermine his power amid fears he could have links to the Communist Party.

The intelligence service carried out surveillance on a number of civil rights figures and suspected communists and they had an interest in smearing their reputation.

The recording from the Willard Hotel near the White House shows how King was accompanied his friend Logan Kearse, the pastor of Baltimore’s Cornerstone Baptist church who died in 1991, along with several female parishioners of his church.

In King’s hotel room, the files claim they then ‘discussed which women among the parishioners would be suitable for natural and unnatural sex acts’.

The FBI document says: ‘When one of the women protested that she did not approve, the Baptist minister immediately and forcefully raped her’ as King watched.

He is alleged to have ‘looked on, laugh and offered advice’ during the encounter.

FBI agents were in the room next door but did not intervene.

When one woman showed reluctance, King was allegedly heard saying that performing the act ‘would help your soul’.

Senior FBI officials later sent King a copy of the incriminating tape and called him an ‘evil abnormal beast’ and his sexual exploits would be ‘on record for all time’.

The letter also suggested he should commit suicide before his wrongs were revealed to the world.

King’s philandering has long been suspected, however Garrow, who spent several months digging through the archive material, said he had no idea of the scale or the ugliness of it and his apparent indifference to rape until he saw the files.

He said: ‘It poses so fundamental a challenge to his historical stature as to require the most complete and extensive historical review possible.’

His wife Coretta often complained he was hardly with her and even said he would spend less than 10 hours a month at home.

Who is David Garrow? 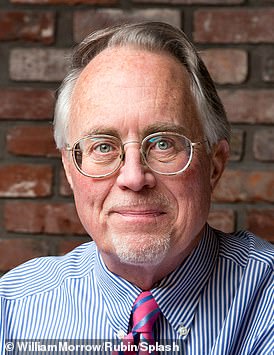 David Garrow’s biography of King earned him a Pulitzer Prize

The American historian and author, 66, has frequently written about the civil rights movement in the US.

His 1986 biography about King, Bearing the Cross, won the Pulitzer Prize for biography.

He has taught history at a number of universities across the US and also written about Barack Obama and reproductive rights.

The distinguished researcher detailed some of King’s affairs in his original biography but he said he was not aware of its scale until now.

He also published The FBI and Martin Luther King, Jr, a work that analyses the relationship between the intelligence service and the civil rights leader.

According to one FBI report, King even said: ‘She should go out and have some sexual affairs of her own.’

There is even a suggestion in the files that King fathered a daughter with a secret girlfriend in Los Angeles.

Both the mother and child are alive but refused to talk to Garrow.

Dr King was assassinated in 1968 by James Earl Ray but many conspiracy theories suggest that the government was involved.

Small-time criminal Ray was caught trying to board a plane at London Heathrow on a fake Canadian passport. He pleaded guilty to the killing and quickly recanted, claiming he was set up.

The conviction stood and Ray died in prison at the age of 70 in 1998. He had been serving a 99-year jail term.

Marking the anniversary of Dr King’s assassination last year, President Donald Trump issued a proclamation in honour of Dr King, saying: ‘In remembrance of his profound and inspirational virtues, we look to do as Dr King did while this world was privileged enough to still have him.’

The president was heavily criticised by some speakers at MLK commemorations around the time of the anniversary as they complained of fraught race relations and other divisions since he was elected.

Among the largest gatherings was a march through the Mississippi River city where the civil rights leader was shot dead on a motel balcony.

In the immediate aftermath of Dr King’s assassination there were race riots across the country, from Washington DC to Chicago and Baltimore.

From 1971 onwards Martin Luther King JR Day has been observed to remember him.

But it wasn’t until 2000 that all 50 states took part in the national holiday, the last three being Arizona, Utah and New Hampshire.

In 2016 the US Treasury Secretary announced that images from the iconic I Have A Dream speech would be among several to feature on the back of American bank notes from 2020. 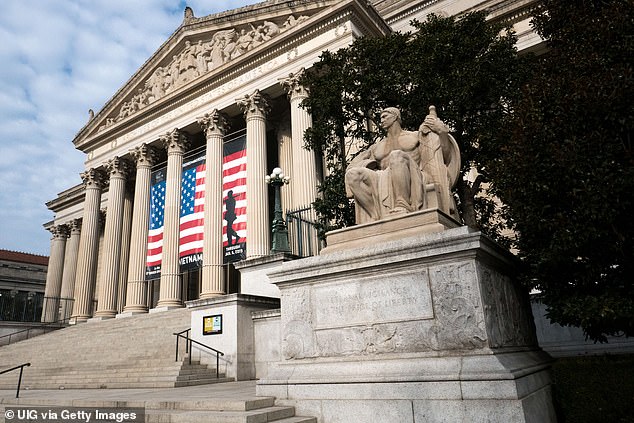