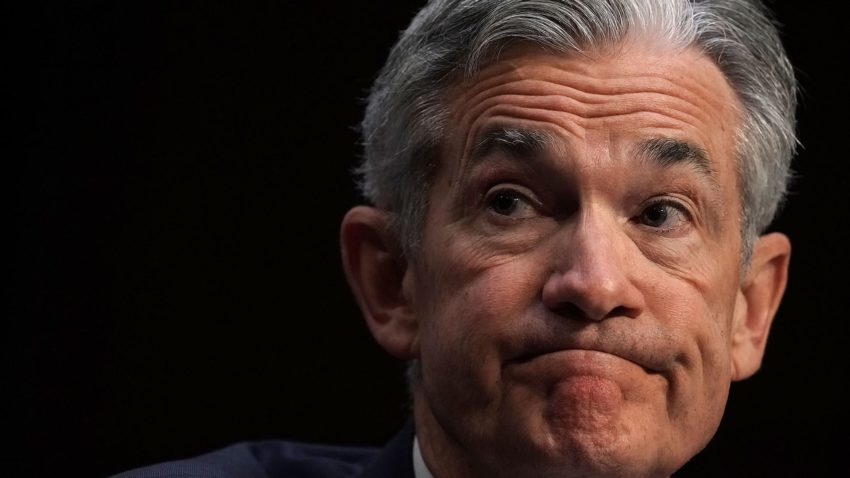 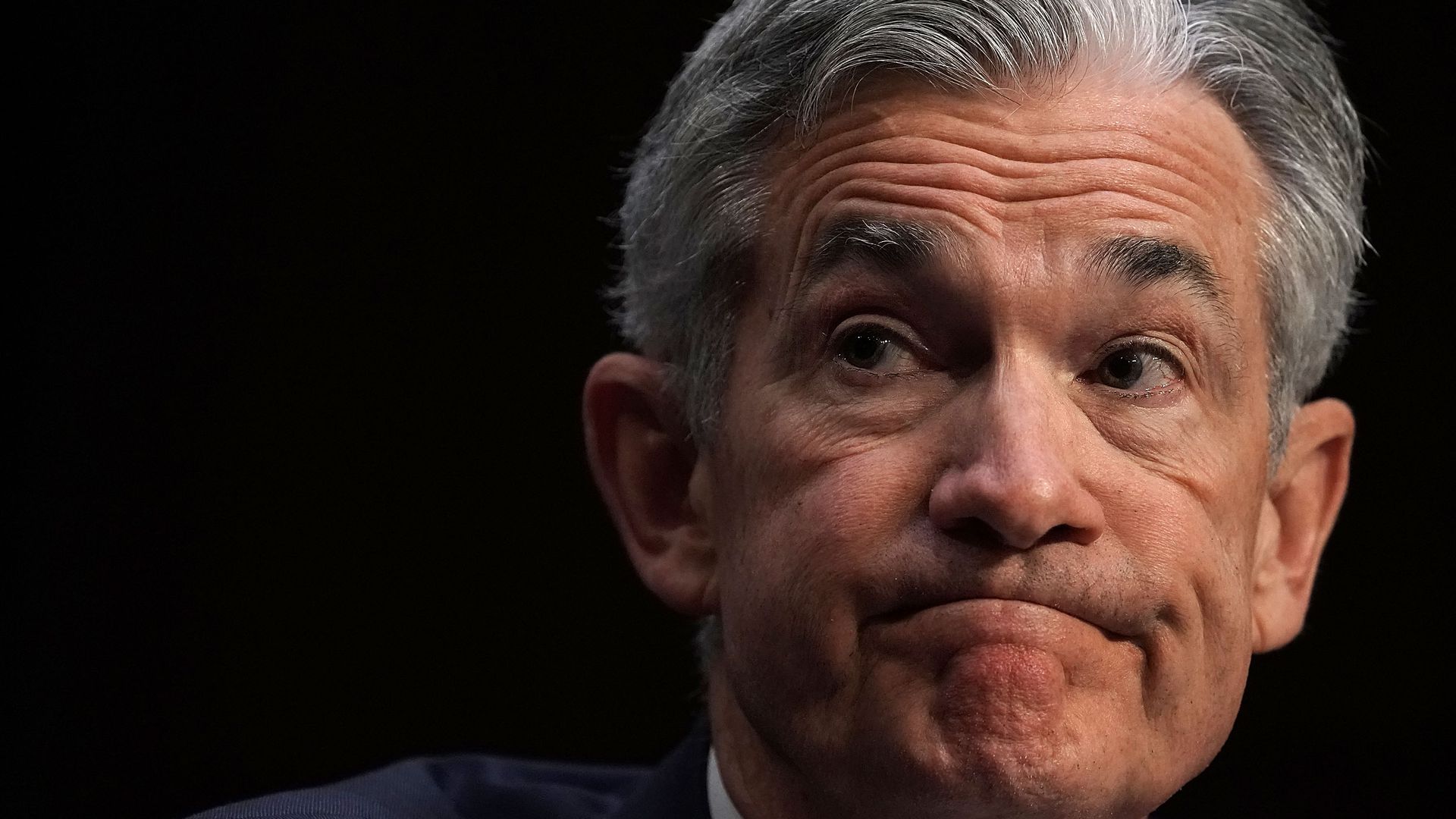 Federal Reserve Board Chair Jerome Powell said ‘nothing’ will deter independent central bankers from following their economic convictions – after an extraordinary pressure campaign by President Donald Trump failed to stave off a rate hike.

Powell got asked repeatedly Wednesday about Trump’s extended public push to hold off on further rate increases – which the Fed’s rate committee brushed past as it came out with a 0.25 percent increase in the Fed’s closely-watched lending rate.

And though he didn’t go after Trump by name, Powell, who was nominated by the president, proclaimed his independence when asked about the pressure tactics by multiple reporters at a rare press conference.

‘Political considerations play no role whatsoever in our discussions or our decisions about monetary policy,’ Powell told reporters just minutes after the Fed announced its rate hike. 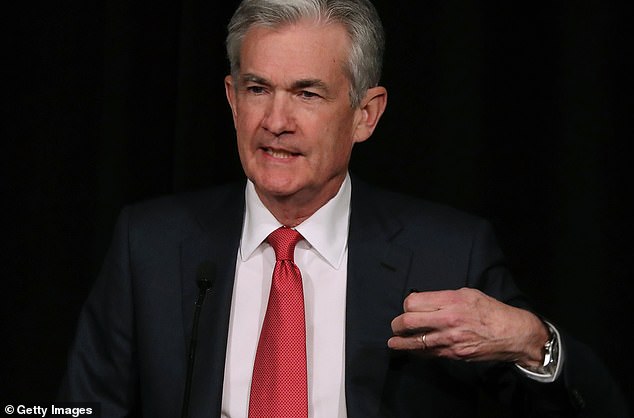 ‘Nothing will deter us from doing what we think is the right thing to do,’ said Trump-appointed Fed chair Jerome Powell

‘We’re always going to be focused on the mission that Congress has given us we have the tools to carry it about. We have the independence which we think is essential to be able to do our jobs in a non-political way,’ he continued.

Then, the central banker insisted in stark terms: ‘We at the Fed are absolutely committed to that mission, and nothing will deter us from doing what we think is the right thing to do.’

Later, Powell got asked about Trump’s urging Tuesday on Twitter to ‘feel the market’ in one of his many pleas to keep rates low.

‘Broadly speaking we don’t look at any one market,’ he responded. ‘What matters for the broader economy is material changes in a broad range of financial conditions,’ he said.

The Federal Reserve’s rate-making committee announced a decision Wednesday to raise rates by a quarter of a percentage point – turning back a pressure campaign by Trump against an increase.

The central bank announced a decision to raise rates by 0.25 percent, brushing off public pressure by the president. That put the Fed’s benchmark rate at 2.5 percent, up from 2.25 percent before the change.

The fed acted after an extraordinary pressure campaign by President Trump, who fears further rate hikes will undermine the U.S. economy, which could, in turn, cause him political challenges. 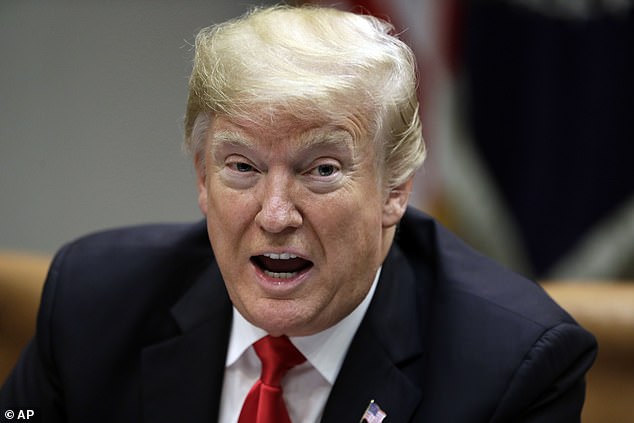 ‘Political considerations play no role whatsoever in our discussions or our decisions about monetary policy,’ said Powell after President Trump’s pressure campaign 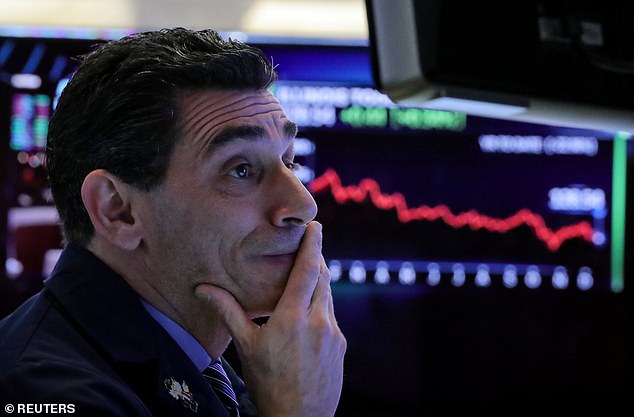 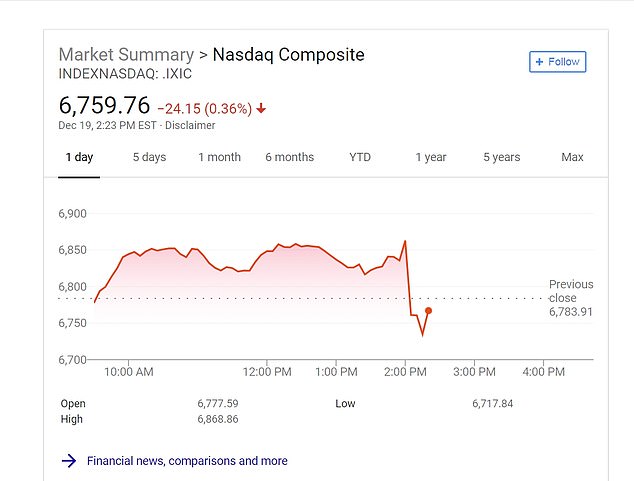 The move, which was anticipated by the markets, will impact consumer borrowing on a number of fronts.  It also sent the stock market dropping in the immediate minutes after the announcement.

The Dow Jones Industrial Average immediately retreated from a 350-point gain in the minutes after the news. The broader S&P 500 shed its 1-percent morning gain. The tech-heavy NASDAQ also dropped.

The Federal Open Markets Committee had already ordered three previous rate hikes this year, despite escalating pressure from the president.

‘Judgements of people both inside and outside the fed will sometimes differ,’ Powell told reporters in a rare press conference after the announcement, in a mere hint at critics like Trump.

Reporters were reluctant to press Powell on the breadth of the president’s repeated public attacks. When one of them did raise it in a three-part question, Powell responded: ‘Political considerations play no role whatsoever in our discussions or our decisions about monetary policy. We’re always going to be focused on the mission that Congress has given us.’

Powell said members of the Fed were determined to ‘do our jobs in a non-political way. We at the fed are absolutely committed to that mission, and nothing will deter us from doing what we think is the right thing to do.’

According to a statement by the Federal Open Markets Committee Wednesday afternoon: ‘The Committee judges that some further gradual increases in the target range for the federal funds rate will be consistent with sustained expansion of economic activity, strong labor market conditions, and inflation near the Committee’s symmetric 2 percent objective over the medium term.’

In addition to the increase of 25 basis points, the fed signaled there could be two further rate hikes during 2019 when three had been anticipated – meaning there could be two more opportunities for presidential heartburn about the Fed’s policy.

A prior statement used the term ‘expects’ rather than ‘judges,’ which could connote ore determination and less passivity, CNBC noted.

Prior increases have helped drive up the Fed’s benchmark rate over 2 percent – which in turn drives up borrowing costs for ordinary Americans. But the central bank has been seeking to head off inflation while putting rates in a position where it has flexibility in case it needs to combat a future recession.

On Tuesday, Trump undertook what in previous administrations would have been the unusual step of urging further rate hike on the eve of a key meeting.

‘I hope the people over at the Fed will read today’s Wall Street Journal Editorial before they make yet another mistake. Also, don’t let the market become any more illiquid than it already is. Stop with the 50 B’s. Feel the market, don’t just go by meaningless numbers. Good luck!’ the president wrote. 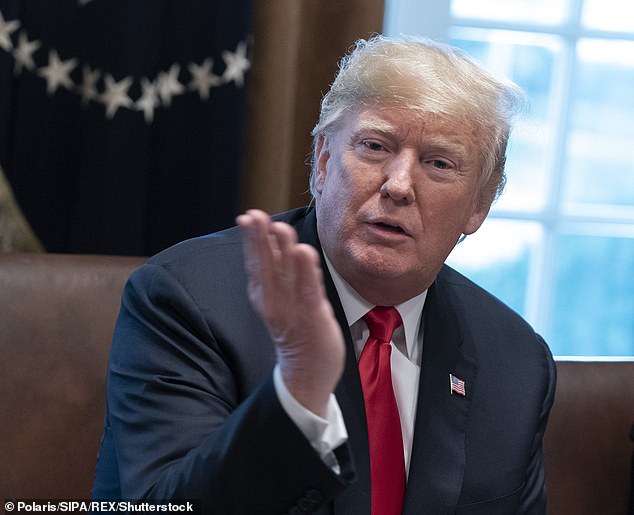 TAKE A HIKE! President Donald Trump put the pressure on the Federal Reserve Tuesday not to hike interest rates 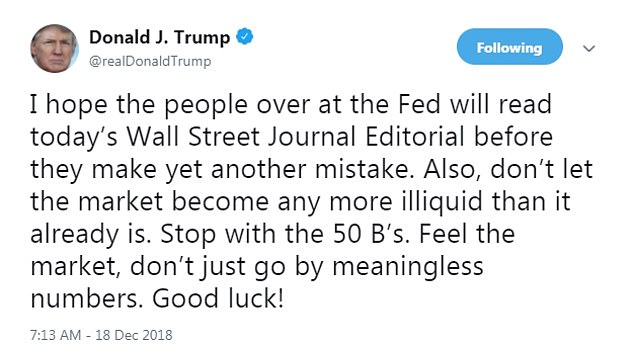 Trump warned the Fed not to ‘make yet another mistake’ 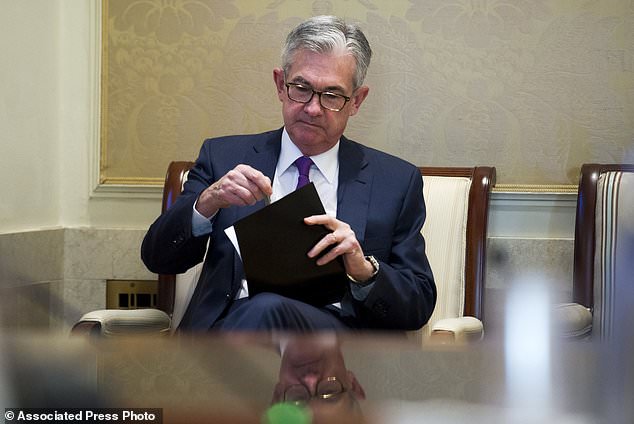 Trump has railed for months against the central bank and Chairman Jerome Powell as the Fed continues to raise interest rates.

His tweet comes a day after U.S. stocks dropped again on Monday as another day of big losses took the market to its lowest level in more than a year.

The president has repeatedly hailed stock market gains, trumpeting them on Twitter and at news events. He has been less talkative amid an October drop and a down December that wiped out market gains for the year.

Earlier this month, Trump said ‘I think it would be foolish’ for the Fed to raise rates.

In late November, he told the Washington Post he was ‘not even a little bit happy with my selection of Jay,’ in reference to Powell. He added: ‘They’re making a mistake because I have a gut and my gut tells me more sometimes than anybody else’s brain can ever tell me.’

He complained in October: ‘I think the Fed has gone crazy.’