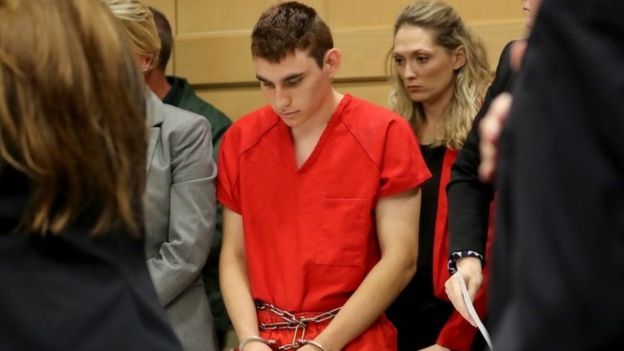 Mr. Cruz appeared in court on Monday in Fort Lauderdale

He spoke with Republican Senator John Cornyn about a bipartisan bill that seeks to improve the checks in place before someone can buy a gun.

The suspect in last week’s Florida school shooting, in which 17 people died, bought his gun legally. Nikolas Cruz appeared in court on Monday.

Students from the school have demanded action on gun control.

It has emerged that Mr Cruz was able to buy seven rifles in the past year, despite being examined by Florida mental health workers in 2016, US media report. One of those was the AR-15 semi-automatic rifle used to carry out last Wednesday’s attack.

“While discussions are ongoing and revisions are being considered, the president is supportive of efforts to improve the federal background check system,” White House press secretary Sarah Sanders said on Monday.

What checks are currently in place?

Federally licensed dealers must run checks on anyone trying to purchase a gun. A potential buyer fills in a form with personal information and criminal history.

But the system has holes because it relies on state and federal officials to report any criminal convictions and mental health issues that should legally stop someone buying a gun to NICS.