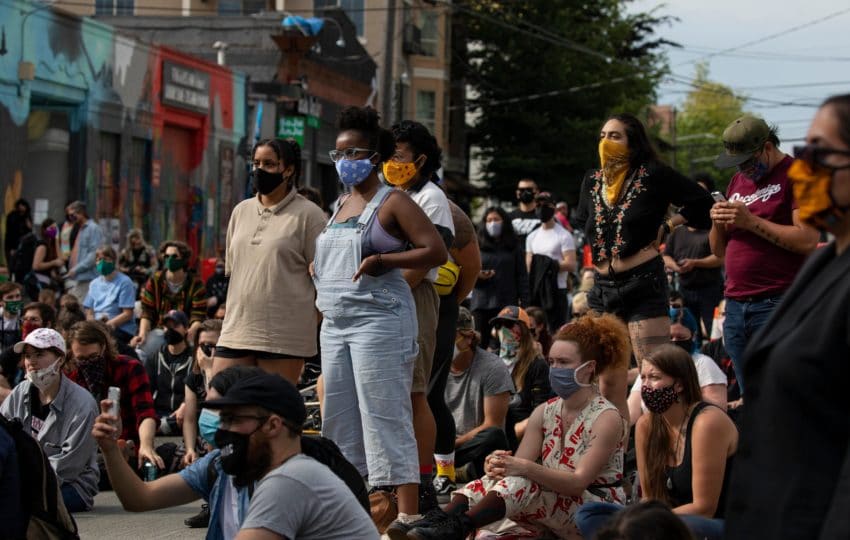 President Trump challenged Seattle’s mayor to “take back your city” after the police vacated a station house and protesters laid claim to the neighborhood around it.

SEATTLE — On the streets next to a police station in Seattle’s Capitol Hill neighborhood, protesters and officers spent a week locked in a nightly cycle of standoffs, at times ending with clouds of tear gas.

But facing a growing backlash over its dispersal tactics in the aftermath of George Floyd’s death in Minneapolis, the Seattle Police Department this week offered a concession: Officers would abandon their building, board up the windows and let the protesters have free rein outside.

In a neighborhood that is the heart of the city’s art and culture — threatened these days as rising tech wealth brings in gentrification — protesters seized the moment. They reversed the barricades to shield the liberated streets and laid claim to several city blocks, now known as the “Capitol Hill Autonomous Zone.”

GEORGE FLOYD MEMORIAL
The location where he had his fatal encounter with the police near Cup Foods in Minneapolis has become a place for the community to reflect.
“This space is now property of the Seattle people,” read a banner on the front entrance of the now-empty police station. The entire area was now a homeland for racial justice — and, depending on the protester one talked to, perhaps something more.

What has emerged is an experiment in life without the police — part street festival, part commune. Hundreds have gathered to hear speeches, poetry and music. On Tuesday night, dozens of people sat in the middle of an intersection to watch “13th,” the Ava DuVernay film about the criminal justice system’s impact on African-Americans. On Wednesday, children made chalk drawings in the street.

A barricade in the autonomous zone.Credit…Ruth Fremson/The New York Times

One block had a designated smoking area. Another had a medic station. At the “No Cop Co-op,” people could pick up a free LaCroix sparkling water or a snack. No currency was accepted, but across the street, in a nod to capitalism, a bustling stand was selling $6 hot dogs. It was dealing in U.S. dollars.

On Wednesday night, President Trump tried to portray the scenes in the city as something more sinister. He called for government leaders to crack down on the protesters, declaring on Twitter that “Domestic Terrorists have taken over Seattle.”

ANTIFA CLAIMS
Despite claims by President Trump and Attorney General William P. Barr, there is little evidence that loosely organized anti-fascists are a significant player in protests.

“Take back your city NOW,” Mr. Trump wrote in a tweet directed at Mayor Jenny Durkan and Gov. Jay Inslee that he repeated on Thursday. “If you don’t do it, I will. This is not a game.”

Ms. Durkan responded with a tweet of her own: “Make us all safe. Go back to your bunker.”

Carmen Best, the police chief, said in a video message on Thursday that the decision to leave the police station was not hers and that she was angry about how it developed. She also shared, without evidence, concerns about problems in the area, such as businesses being asked to pay money in exchange for protection.

Ms. Best said later in the day that nobody had made a formal report and that those issues were just circulating on places like social media. The Capitol Hill Business Alliance said it had been reaching out to businesses in the area and found no reports of any such problems.

The protest zone has increasingly functioned with the tacit blessing of the city. Harold Scoggins, the fire chief, was there on Wednesday, chatting with protesters, helping set up a call with the Police Department and making sure the area had portable toilets and sanitation services.

“I have no idea where we’re headed,” Chief Scoggins said in an interview. “We’ve been working step by step on how to build a relationship, build trust in small things, so we can figure this out together.”

The demonstrators have also been trying to figure it out, with various factions voicing different priorities. A list of three demands was posted prominently on a wall: one, defund the Police Department; two, fund community health; and three, drop all criminal charges against protesters.

While Mr. Floyd’s death in Minneapolis drove most of the energy in the streets toward ending police violence and racial injustice, some people here in recent days have pushed for a wider focus. Some of the messages mirror the 2011 Occupy movement and seemed aimed at targeting corporate America for its role in social inequities.

“The more we encourage and focus on the race thing, the greater our attention is not focusing on the fact that this is class warfare,” said a 28-year-old protester and self-described anarchist who identified himself only by his first name, Fredrix.

On Tuesday night, Kshama Sawant, a City Council member affiliated with the Socialist Alternative Party, led protesters to City Hall, holding a gathering inside the building in which she promoted her plan to tax Amazon, which is headquartered in the city.

But some of those who mobilized here over race and policing have begun to worry that these broader priorities could cloud the agenda at a time when vital progress for African-Americans seemed within reach.

“We should focus on just this one thing first,” said Moe’Neyah Dene Holland, 19, a Black Lives Matter activist. “The other things can follow suit. Because honestly, black men are dying and this is the thing we should be focusing on.”

The city prepared for the possibility that the street demonstrations could linger. On Wednesday, a team from the Seattle Department of Transportation came through intending to replace some of the orange barriers — including one marked “People’s Republic of Capitol Hill” — with planter boxes filled with coral bells and other plants to give the new pedestrian zone an air of permanence.

But when the crew went to remove the barriers, some of the protesters objected. The crew stood down, and Rodney Maxie, a deputy director at the transportation department, told his team they might return later, after further talks with the demonstrators.

“This is good practice for the 9.0 earthquake,” he told his team.

The protesters also had differing opinions about how long the autonomous zone would last. Some wondered if the Police Department would try to reclaim the territory. Others said they expected the barriers to be up for weeks, until state and city leaders had done enough to meet their demands.

John Moore, 23, said he hoped to see the autonomous zone become legally recognized. Mr. Moore wore a stethoscope and paramedic apparel in a makeshift health center set up on the patio of a taco restaurant. The medic team was looking for a more permanent space to provide health services, and Mr. Moore said they had dozens of people with a range of qualifications, from CPR certifications to experience in a Level 1 trauma center.

Mr. Moore said the experiment in a place without police officers could work.

“We are trying to prove through action and practice that we don’t need them and we can fulfill the community’s needs without them,” he said.