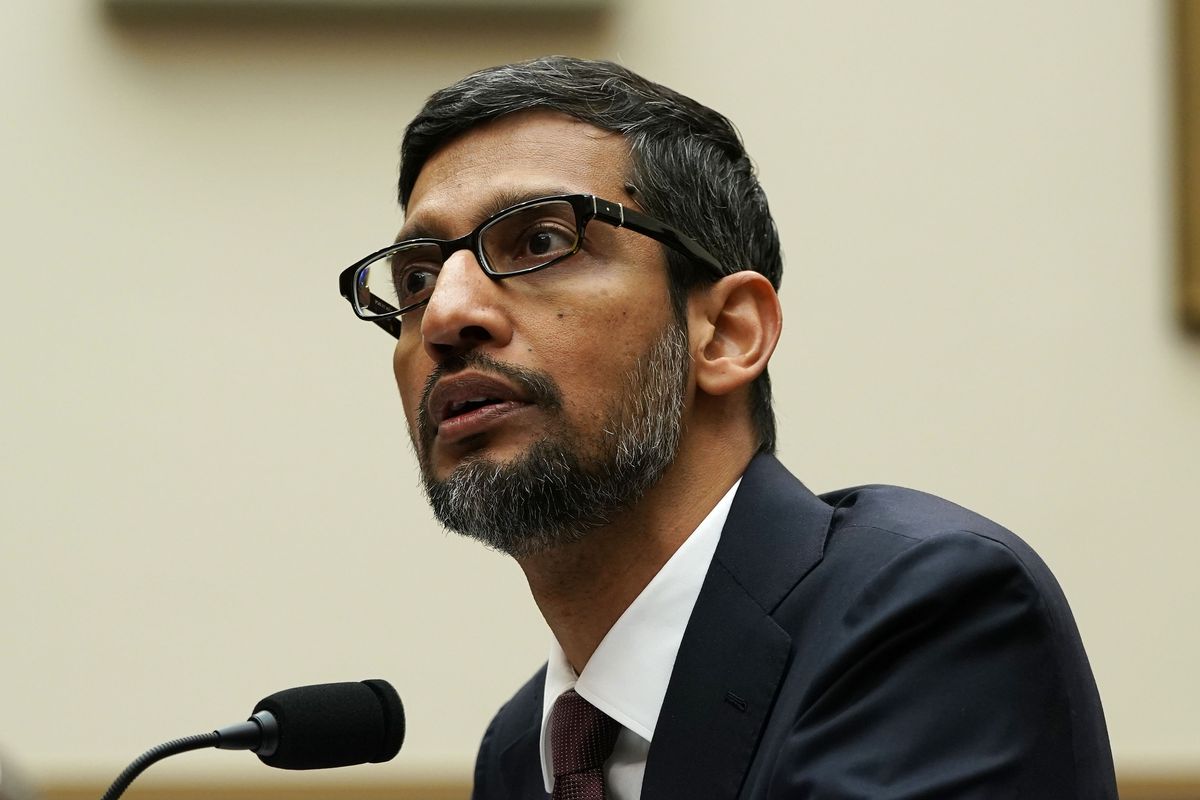 Google’s CEO began his testimony before the House Judiciary Committee on Tuesday where lawmakers began grilling him on a wide range of issues, including potential political bias on its platforms, its plans for a censored search app in China and its privacy practices.

This is the first time Pichai has appeared before Congress since Google declined to send him or Alphabet CEO Larry Page to a hearing on foreign election meddling earlier this year. That slight sparked anger among senators who portrayed Google as trying to skirt scrutiny.

The hearing culminates a tough year for big tech companies, as lawmakers and the public have become increasingly skeptical about Silicon Valley’s effects on democracy, misinformation, and privacy. Tuesday’s proceedings will test the soft-spoken executive’s ability to remain cool and confident while defending Google in the face intense questioning.

In their opening remarks, Representatives Kevin McCarthy (R-Ca.) and Bob Goodlatte (R-Va.) outlined how they hoped the hearing would focus on Google’s bias against conservative content, handling of misinformation and hate speech, data privacy, and plans in China.

“Right now, we have no plans to launch search in China,” Pichai answered, adding that access to information is “an important human right.”

Pichai’s has said in the past that Google is “not close” to launch a censored search result in China, though Tuesday’s comments appear to further distance the company from those efforts. The Intercept reported in September that at one point Google employees working on the “Project Dragonfly” efforts were told to get it in “launch-ready state” to roll out upon approval from Beijing officials.

A handful of representatives also asked Pichai about how transparent (or not) Google is when it comes to its data collection practices. The company came under fire earlier this year after The Associated Press revealed that contrary to what a user might reasonably assume, pausing “Location History” tracking on a Google account didn’t actually stop the search giant from storing time-stamped location data. Google ended up clarifying the language of its policy.

At the hearing, Pichai said that more than 160 million people had checked their Google privacy settings in the last month, but that Google wanted to make it even easier for “average users” to control their data.

“We always think that there is more to do,” Pichai said. “It’s an ongoing area of effort.”

In response to a later question about the General Data Protection Regulation (GDPR) that came into effect in the European Union earlier this year, Pichai said that there was “some value for companies to have consistent global regulation,” and highlighted how Google published its own framework to guide data privacy legislation earlier this year.

One of the explicit focuses of the hearing was whether or not Google’s search results were biased against conservative points of view. Multiple representatives posed questions on this topic, to which Pichai repeatedly responded that Google’s search algorithms did not favor any particular ideology, but instead surfaced the most relevant results.

One particularly fiery take against that line of questioning came from Rep. Ted Lieu (D-Ca.) who said that the queries on the conservative bias “wasted time” given that private, profit-seeking companies like Google are protected by the First Amendment. Even if Google was biased, he said, that would be its right. However, he also used sample Google searches to show that Google would turn up positive search results about Republicans and negative search results about Democrats.

“If you want positive searches, do positive things,” Lieu said. “If you get bad press, don’t blame Google. Consider blaming yourself.”

Lieu has made similar points at past hearings with the major tech companies.

Tuesday’s hearing is titled “Transparency & Accountability: Examining Google and its Data Collection, Use, and Filtering Practices” and specifically focuses on the company’s potential political bias and information filtering. Republican lawmakers — and even President Donald Trump himself — have previously accused Google and other tech platforms of suppressing conservative voices.

Google has denied accusations of bias, and there is no proof that results on its search engine or YouTube are purposely skewed toward any particular ideology. Still, the inner workings of how exactly Google’s platform’s surface search results are complicated and opaque, and the company has faced bias complaints of other sorts.

Google is by far the most popular search engine in the world, with more than 90 percent market share, according to StatCounter. Regulators and competitors like Yelp have criticized Google for surfacing its own services, like maps, jobs postings, business reviews and travel information over information from other websites. Last year, the EU slapped Google with a $2.7 billion antitrust fine for its shopping results.

Google “has great influence over what millions of people can and cannot find on the Internet,” House Majority Leader Kevin McCarthy, R-Calif., said in a statement. That power “comes with a responsibility to its users,” he added.

A year of scandals, inside the company and out

Overall, Google has faced multiple high-profile scandals over the course of 2018 and has seen its workforce organize against it at a scale previously unheard of in the tech sector, particularly through a 20,000 person walkout in response to the company’s handling of sexual misconduct.

In that vein, Pichai will likely face questions about Google decision earlier this year not to renew a Pentagon contract for analyzing drone videos using artificial intelligence. Google dropped that project, called Maven, following employee protests through petitions and resignations. Pichai subsequently published an artificial intelligence ethics code that Google would work with the government and military on cybersecurity and training, but not on weapons or surveillance that violate “internationally accepted norms.”

In his prepared remarks ahead of Tuesday’s hearing, Pichai emphasized Google’s patriotism, a stance that seemed aimed at appeasing critics who saw Google’s abandonment of Project Maven as turning its back on the Department of Defense.

“I am proud to say we do work, and we will continue to work, with the government to keep our country safe and secure,” Pichai said.

Another topic sure to come up is Google’s plan to launch a censored search engine in China. The Intercept first reported details of the project, which would block search results for queries that the Chinese government deemed sensitive, like “human rights” and “student protest” and link users’ searches to their personal phone numbers.

This is another topic that has spurred Google employees to speak out publicly, with more than 730 recently signing an open letter calling on the company to cancel its efforts. Pichai has said that Google is “not close” to launching a censored search product in China but has defended its experimentation by saying that its service could be a better option than current domestic products,and that it could serve most user queries. Meanwhile, human rights groups and lawmakers alike have criticized Google for potentially violating user privacy and aligning with China’s oppressive regime.

Google’s track record on privacy will likely come under fire, too, since it revealed Monday that a security bug allowed the profile information of 52.5 million Google Plus users to be viewable by developers, even if their profiles were set to private. This is the second Google Plus flaw of the year. In October, The Wall Street Journal reported that Google didn’t disclose its first one for months because it feared regulatory scrutiny and damage to its reputation.

In his prepared remarks, Pichai said Google supported federal privacy legislation, and he will likely be asked about it during Tuesday’s hearing.

While Facebook’s congressional appearances earlier this year revealed that lawmakers’ often possess only a scant understanding of how the technology they’re questioning actually works, the way that Pichai responds will either help Google smooth over its Capitol Hill relations or create more headaches.