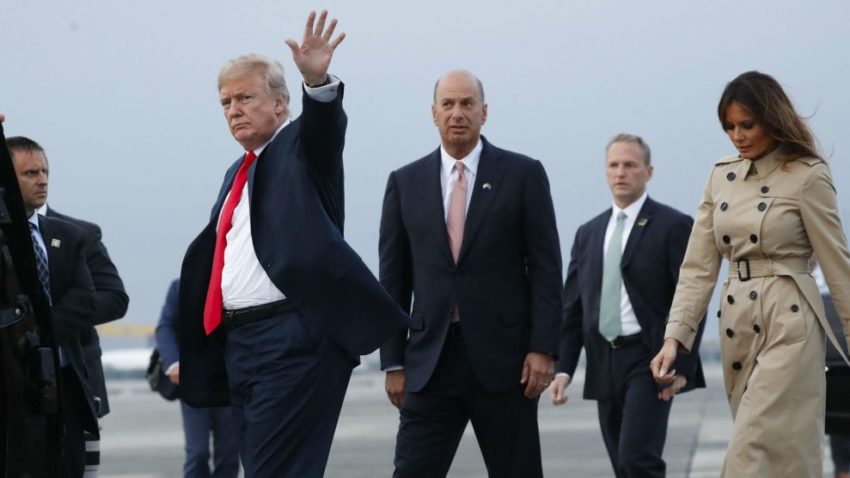 The Trump administration has blocked the US ambassador to the European Union from testifying to a congressional impeachment investigation.

Gordon Sondland was due to meet behind closed doors on Tuesday with staff from three Democratic-led House committees.

But the envoy was directed by the Department of State not to attend.

Mr Sondland was set to be grilled about any role he played in prodding Ukraine to investigating President Donald Trump’s political rival Joe Biden.

Mr Trump said Mr Sondland would only have been testifying to a “kangaroo court”.

In a phone call on 25 July, Mr Trump asked the newly elected Volodymyr Zelensky to investigate the former US vice-president, who is a leading Democratic White House contender in next year’s election.

A whistleblower raised concerns about the phone call, and the Democratic leader of the House of Representatives, Speaker Nancy Pelosi, announced a formal impeachment investigation last month.

In a statement released through his lawyer, Mr Sondland said he was “profoundly disappointed” he would not be able to testify.

“Ambassador Sondland believes strongly that he acted at all times in the best interests of the United States, and he stands ready to answer the Committee’s questions fully and truthfully,” said the statement.

This should just about settle it. The Trump administration is not going to co-operate with the congressional impeachment inquiry. Not at all. Not one bit.

That shouldn’t come as a huge surprise, since the president himself has asserted that the entire investigation is illegitimate and the State Department has already objected to its employees testifying before Congress. Instructing EU Ambassador Gordon Sondland to cancel his deposition just hours before he was scheduled to appear, however, is particularly confrontational. It’s sure to enflame the already heightened tensions between Congress and the White House.

House Democrats were keen to press Sondland on recently revealed text messages that showed he worked with other administration diplomats to encourage Ukraine to investigate an energy company with ties to Joe Biden’s son. They also may have been curious to find out why the Republican-donor-turned-EU-ambassador was even involved in diplomacy with a nation that is not part of the EU.

Now they won’t get anything – at least, not from Sondland directly. And while Democrats might cite the administration’s obstinance as evidence of obstruction, their goal is a quick and thorough inquiry, not a drawn-out investigatory stalemate.

In one of the texts, Mr Sondland said Mr Trump “really wants the deliverable”.

In another exchange, Bill Taylor, the senior US diplomat in Ukraine, questions whether conditions are being attached to US military aid and a White House invitation for Ukraine’s president.

Mr Sondland replies that their discussion should be continued over the phone.

Another text shows Mr Taylor saying it would be “crazy” to withhold military aid to Ukraine for Mr Trump’s political gain in the 2020 election.

Mr Sondland was a Seattle-based hotelier who donated $1 million to the Republican president’s inauguration committee before Mr Trump nominated him to his position as ambassador in May.

He had been due to give private testimony on Tuesday to the House of Representatives Foreign Affairs, Intelligence and Oversight Committees.