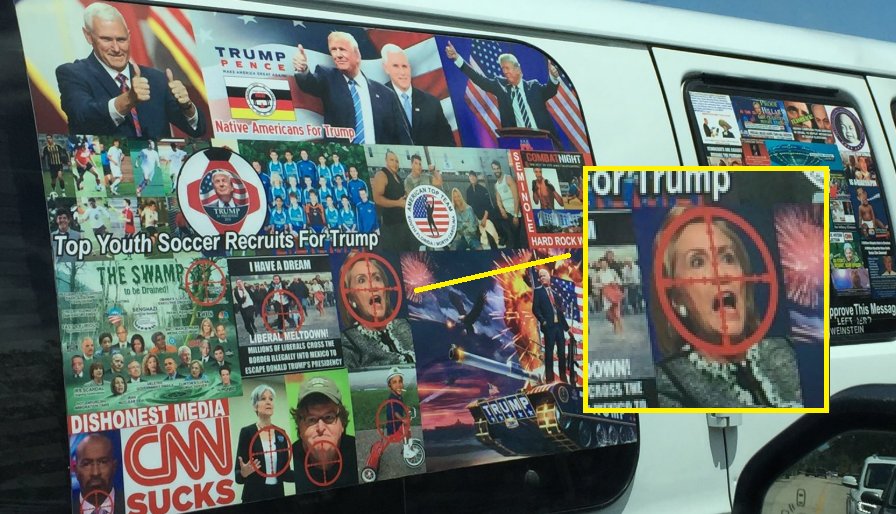 A man in Florida was taken into custody Friday and will be charged in connection with the series of bombs found this week addressed to critics of President Donald Trump, law enforcement officials said shortly after the latest two devices were found.

Cesar Sayoc Jr., 56, who has been arrested before, is currently in custody, law enforcement officials said. DNA evidence played a role in the arrest, law enforcement told NBC News. Sayoc was previously arrested in 2002 for threatening to throw a bomb, and pleaded guilty, but was given a special sentence in which probation is ordered but a formal conviction is not made. He was also arrested for theft in 1992 and 2014.

Sayoc filed for bankruptcy in 2012 and is registered as Republican, according to public records. His cousin, who asked not to be identified, said Sayoc had worked in strip clubs as a dancer and a bouncer.

Investigators in the Plantation, Florida, the parking lot where Sayoc was arrested could be seen placing a tarp over a van with windows covered with pictures of Trump and political memes. Some pictures on the van of democratic politicians, including Hillary Clinton, have targets covering their faces.

His Twitter feed is full of partially incoherent attacks on Democrats and the media.

A third suspicious package was found at a Sacramento postal facility and addressed to Sen. Kamala Harris, D-Calif., two law enforcement officials told NBC News. It wasn’t immediately clear if that package was connected to the others.

The package addressed to Booker, D-N.J., was discovered at a postal facility in Opa-Locka, Florida. On Thursday, investigators said they believed some of the packages may have passed through that mail sorting facility. The packages listed Rep. Debbie Wasserman Schultz’s address in Sunrise, Florida, as the return address. Sunrise is adjacent to Plantation and less than 20 miles north of Opa-Locka.

The package mailed to Clapper was addressed to CNN’s New York offices, according to a picture obtained by NBC New York, and discovered at a postal facility in Midtown Manhattan.

The New York Police Department said Friday morning that they were responding to a possible device at the postal facility at 52nd St. and 8th Ave. in Manhattan, about six blocks away from the Time Warner Center, where CNN is located. The explosive device is the second to be addressed to the news network this week.

Buildings near the post office, including a high school, had been evacuated.

Police said later Friday morning that the package had been removed and would first go to an NYPD facility in the Bronx before it would be sent to the FBI’s lab in Quantico.

On CNN, where Clapper works as a contributor, he called the series of mailed explosives “domestic terrorism.”

“I think anyone who has in any way been a critic, publicly been a critic of President Trump needs to be on extra alert and take some cautions, precautions, particularly with respect to mail,” he said.

Clapper stressed that he wasn’t “suggesting a direct cause-and-effect relationship” between anything the president has said or done and the sending of the packages, but “I do think he bears some responsibility for the coarseness and un-civility of the dialogue in this country, and that he needs to remember that his words count.”

At an event Friday, Trump lauded law enforcement for apprehending the suspect, saying “These terrorizing acts are despicable, and they have no place in our country. No place.”

“We must never allow political violence to take root in America,” Trump said. “The bottom line is that the Americans must unify and show the world that we are united in peace and love and harmony as fellow American citizens.”

Earlier in the day, after Friday’s bombs were discovered, Trump tweeted, “Republicans are doing so well in early voting, and at the polls, and now this ‘Bomb’ stuff happens and the momentum greatly slows – news not talking politics. Very unfortunate, what is going on. Republicans, go out and vote!.”

White House press secretary Sarah Sanders told reporters earlier that “the President is receiving constant information as it is available.”

A spokesman for Booker declined to comment and referred all questions to law enforcement.

The package sent to Brennan was also addressed to CNN’s offices in New York and led to an hours-long evacuation of the building Wednesday. Brennan does not work for CNN. He serves as an analyst for NBC News and MSNBC.

Both Biden and Waters received two packages. On Thursday, packages addressed to Biden and De Niro were discovered in Delaware and New York respectively.

At least some of the devices sent were flawed in varying ways and would not have exploded, investigators said Thursday. But it’s unclear whether the deficiencies were intentional or the result of faulty construction, and officials urged the public to remain vigilant.