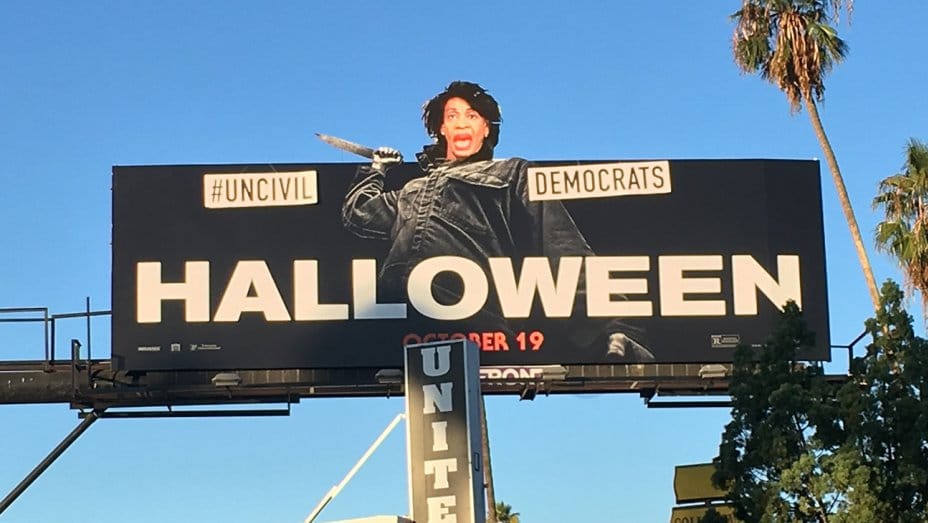 Sabo, a conservative street artist, replaced a photo of killer Michael Myers with one of the congresswoman.

A billboard advertising the new Halloween movie opening Friday was altered after a street artist swapped out an image of serial killer Michael Myers and replaced it with one of Maxine Waters.

The gigantic billboard at Pico Boulevard in West Hollywood remains intact, only the congresswoman is now holding the sharp butcher knife in her right hand, looking ready to plunge it into an unsuspecting victim. The phrase “#Uncivil Democrats” has also been added.

Blumhouse and Universal are advertising the sequel to the 1978 classic slasher movie of the same title on several billboards in and around Hollywood, though in the dead of night a conservative artist known as Sabo hijacked one of them.

Sabo tells The Hollywood Reporter that the text he added to the advertisement is a reference to Waters telling a crowd in June to make things uncomfortable for President Donald Trump and his Cabinet members.

“If you see anybody from that Cabinet in a restaurant, in a department store, at a gasoline station, you get out and you create a crowd,” Waters said at a rally in Los Angeles. “You push back on them and you tell them they’re not welcome anymore, anywhere.”

Halloween is expected to do brisk business this weekend, perhaps opening with north of $70 million domestically and setting a record for a movie during the Oct. 31 corridor.

The film, directed by David Gordon Green, has original survivor Laurie Strode, played by Jamie Lee Curtis, preparing to defend herself should Myers return after 40 years of incarceration.