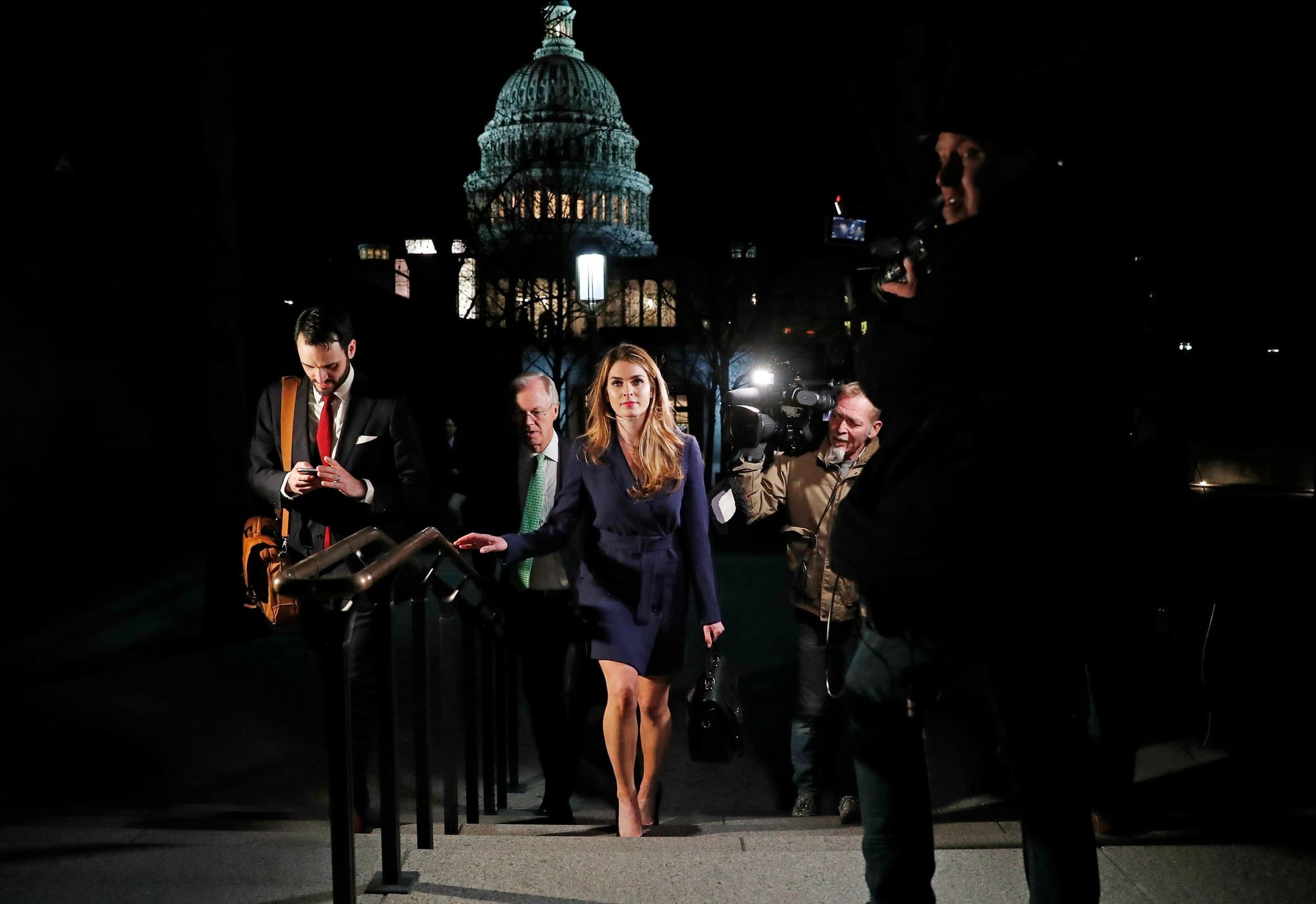 Hope Hicks leaves the Capitol after a nine-hour closed-door session with the House Intelligence Committee.

Presidents are in the habit of lying—often with bloody consequences. The Bay of Pigs, the Gulf of Tonkin, Watergate, Iran-Contra, “mushroom clouds,” and “weapons of mass destruction”—these are just a few of the postwar greatest hits. But, in terms of frequency and of the almost joyful abandonment of integrity as a demand of the office, Donald Trump is singular. He starts lying in the morning, tweeting while watching Fox News, and he keeps at it until his head hits the pillow at night. He lies to slander and seduce, he lies to profit, and he sometimes lies, it seems, just because. His capacity for falsehood is so heroic that we struggle to keep count of the daily instances. (After one year of the Trump Presidency, the Washington Post put the average at 5.9 falsehoods per day, a total of 2,140.) One consequence of this aspect of Trump’s character—oftentimes, it seems to be the very core of his character—is that lying defines the culture of his Administration just as it did his family business.

Hope Hicks has now announced that she is resigning as Trump’s communications director. This comes just one day after she told the House Intelligence Committee, in a nine-hour closed-door session, that she was occasionally given to telling “white lies.” In the moral universe of the Trump White House, her sin could not have been the lying; it could only be the admission.

Michael Flynn. Paul Manafort. Sean Spicer. Anthony Scaramucci. Steve Bannon. Sebastian Gorka. Omarosa Manigault-Newman. Next to these now-departed characters, Hope Hicks was a decidedly recessive cast member, almost a cipher by her own design. She was known among White House reporters to answer calls, texts, and e-mails––a courtesy that is hardly a universal in politics––though she almost never allowed herself to be quoted. When she appeared on television, it was inadvertent, as if she had mistakenly stepped into the frame. When she was written about, reporters invariably leaned on stock phrases about her appearance, her outfits, her loyalty and access to Trump, her ability to read his moods, her stint as a model, and her upbringing in Greenwich, Connecticut. As a communications director, she was, when it came to the subject of Hope Hicks, uncommunicative. The words she used to describe her feelings upon resigning were that she had “no words.”

Hicks, however, is kidding herself if she thinks that her tenure will be judged only for harmless, situational untruths. The white lie is a phrase that goes back to the sixteenth century, at least. “Shakespeare’s World,” a collaboration between the Oxford English Dictionary and the Folger Shakespeare Library, reports that, in 1567, one Ralph Adderly wrote of his brother-in-law, “I do assure you he is unsuspected of any untruth or other notable crime (except a white lie) which is taken for a Small fault in these parts.”