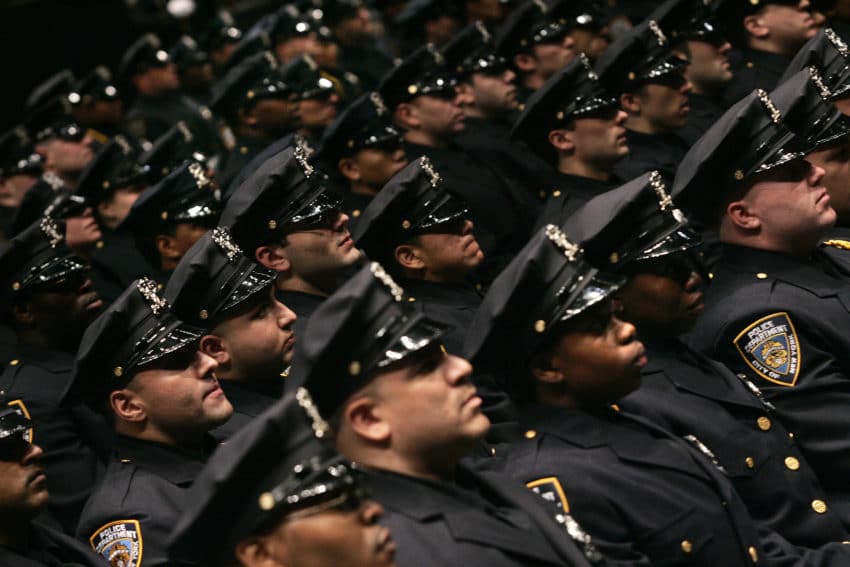 Prison guard Geoffery Crosby was a member of more than 50 extremist groups on Facebook, including scores of racist groups dedicated to the Confederacy. Missouri Sheriff’s Deputy Richard Crites was – and still is – posting anti-Muslim rants on his personal Facebook page. In Georgia, despite warnings from his chief, Abbeville police Officer Joel Quinn continues to post a steady stream of conspiracy theories and right-wing memes on Facebook, including recently sharing an anti-Semitic meme.

In June, Reveal from The Center for Investigative Reporting identified hundreds of police officers across the country who were members of closed racist, Islamophobic, misogynistic or anti-government militia groups on Facebook. We sought reaction from more than 150 law enforcement departments about their officers’ involvement in these extremist groups. Yet only one department – the Harris County Sheriff’s Office, which fired a detective for racist posts – has publicly taken any significant action.

More than 50 departments promised investigations, but few have taken any other steps. The Portland Police Bureau said “no jurisdiction existed” for it to take any action against an officer whose Islamophobic comments were posted before he joined the agency. The New York Police Department said it couldn’t substantiate reporting showing one of its officers had posted misogynistic comments, even though we obtained screenshots.

We’ve been telling stories that change laws and lives for more than 40 years. And we’re just getting started.

Social media activity isn’t just a public-facing display of officers’ beliefs and biases. Officers are susceptible to being radicalized online just like so many civilians, said Christy Lopez, a Georgetown Law professor who oversaw the Department of Justice’s civil rights investigation into the Ferguson Police Department.

“It’s hard when you get out there as a new officer, you’re from a sheltered community somewhere, and you start to see a lot of pain and harm that is often happening in poor communities of color,” Lopez said. “And it is easy for officers who are trying to deal with the emotional impact of that to start to dehumanize people.”

Facebook’s algorithms can deepen this problem. After we joined extremist groups as part of our investigation, Facebook suggested new – and often even more troubling – groups to join or pages to like. It was easy to see how users, including police officers, could be increasingly radicalized by what they saw on their news feed.

That, in turn, plays into a long-stated goal of white supremacists and other extremists: to lure converts in initially with edgy humor and memes before introducing ever more hateful ideas.

Lopez said police departments must ensure cops get continued training not just on how to behave online, but on how to deal with the trauma and stress they encounter on the streets. Departments also must monitor and counsel their employees on social media use – not just to avoid looking bad, but also to stop vulnerable employees from getting sucked in by hateful ideas.

At the Ketchikan Police Department in Alaska, Lt. Andrew Berntson said he sits down with new recruits and discusses how to use social media positively to engage with the community instead of isolating yourself from it. Berntson said agencies need to investigate applicants before hiring them. Departments should scour the social media postings of potential recruits, he said, looking for warning signs that applicants have racist or other discriminatory views.

“You have to get a good view of who this person is, because that’s most likely what they’re going to continue to be,” Berntson said. “If they have predisposed opinions, you need to flush that out in the hiring process.”

Social media searches are just part of the backgrounding process, Berntson said. Departments should also reach out to friends, relatives and former employers to gauge a candidate’s suitability, he said. Small town departments should ask around about a future recruit’s associations and connections, to establish whether they have ever been involved with extremist groups, Berntson said. And in big cities, departments should check with the detectives who investigate extremist groups, to see if a potential recruit has ever been involved with any of the groups on the department’s radar.

Police departments could also duplicate efforts like Reveal’s – researching and joining local chapters of extremist groups on Facebook and other social media sites to monitor them and check for current or potential officers, Berntson said.

“Every department should basically maximize their resources to cover themselves. If they have access to information, or can get it, they should use it,” he said. “Best-case scenario, you’ll find that someone is fine. But the worst-case scenario is that you don’t find out about someone’s past, then an officer hurts or kills somebody and the department gets sued.”

Even then, the world of extremism has learned to adapt and shift to deliberately camouflage hateful activity online. Departments therefore have the challenge of staying up to date with the latest lingo and themes hate groups are using, said Megan Squire, a computer science professor and expert on extremism at Elon University in North Carolina.

“The vocabulary, the jargon these hate groups use is deliberately to keep outsiders out,” Squire said. “If you’re hiring a 20-year-old, they’re going to have memes and terminology that your average 40- or 50-year-old isn’t going to know naturally like they would know a swastika.”

Keeping up with the latest trends in extremism is no simple task, Squire said, but departments could outsource their research, working with local academics or activists to build knowledge about how hate groups communicate online. There are also valuable resources available online, she said, like the Anti-Defamation League’s Hate Symbols Database.

And the International Association of Chiefs of Police runs the Center for Social Media, which publishes guidelines and “awareness briefs” to inform police departments about questionable online activity and how to identify and investigate extremists online.

The organization didn’t respond to several calls for comment. A guide to “cybervetting” potential recruits on its website, despite being almost 10 years old, provides extensive guidance for departments. The document details how a department can set up a vetting policy and lays out the legal parameters departments can work inside – explaining how departments should balance privacy concerns with the need to know more about their recruits.

In Savannah, Georgia, Chief Sedrick Rivers, of the Savannah/Hilton Head International Airport Police, said the information we uncovered about one of his officers has been instrumental in helping him draft new policies for social media use at the department. We tried to follow up with him to learn more. After initially opening up to us, however, Rivers then stopped taking our calls.

New York Police Department Officer Randy Paulsaint was active inside several closed Facebook groups that denigrate and insult women. When we provided screenshots that showed his activity and his status as a police officer, the NYPD called our claims “unsubstantiated.” The NYPD didn’t respond to repeated calls to elaborate on that explanation.

We tried to understand whether the officers we identified on Facebook had been involved in real-life issues around discrimination. However, all but 13 states keep their police disciplinary records secret.

The public isn’t allowed to view Paulsaint’s disciplinary records because they’re confidential in New York. Therefore Reveal couldn’t establish whether an officer who called women “money grabbing whores” and who posted a GIF of a woman being kicked in the head by a man has a history of treating women with respect in his police work.

Given the revelations of the past few months from Reveal, ProPublica and the Plain View Project, and the long-standing and well-known history of racial bias and discrimination in American policing, departments need to keep detailed records on the conduct of their employees from their first day on the job, said Samuel Sinyangwe, co-founder of Campaign Zero, which works with local activists and governments to combat discrimination in policing.

And those records should be open to the public for review, he said.

“There’s an established research literature that complaints against officers, officers that are named in misconduct lawsuits, officers who have an above-average number of use-of-force incidents – that all of those things are predictive of future misconduct,” Sinyangwe said.

Not only are police disciplinary records largely shielded from public view, but departments across the country even routinely destroy misconduct records, Campaign Zero found. Sinyangwe said he didn’t know of any departments that could be held up as a success story.

In 2016, the organization studied the union contracts of 81 of the 100 largest police departments in the country. More than half required departments to purge records that would help identify officers with histories of misconduct.

“You look at a city like Cleveland, which signed a contract with the police union to systematically purge records of officer discipline after one or two years,” Sinyangwe said. “They’re actually destroying the evidence that’s needed to identify the most problematic officers and prevent these incidents from happening in the future.”

There are efforts around the country to shed light on police practices, however.

In recent years, some activist groups have focused on altering police union contracts to include new rules for police accountability and transparency.

In Texas, for example, the Austin Justice Coalition demanded a seat at the negotiating table between the city and the police union in 2017, after two high-profile incidents of alleged police brutality.

The grassroots group fought for greater transparency from local cops, and while it didn’t get everything it wanted, the coalition was able to negotiate substantial reforms, like changing police rules on purging disciplinary records, and creating an anonymous, online complaints process against officers.

Chas Moore, co-founder and executive director of the coalition, said his group has secured funding to work with grassroots organizations from 10 different cities to emulate the work.

“The police union contract has become the new fight,” he said. “That’s where it starts.”

If police chiefs, commissioners and sheriffs want to lead with courage and dedication to the community, they need to address how every member of their community is treated, said Vera Bumpers, former president of the National Organization of Black Law Enforcement Executives.

“Leadership always sets the tone for how an agency moves forward,” Bumpers said. “The message to recruits can’t just be a one-time message. We have to continually promote professionalism and the fair treatment of all.”

This story was edited by Andrew Donohue and Matt Thompson and copy edited by Stephanie Rice.