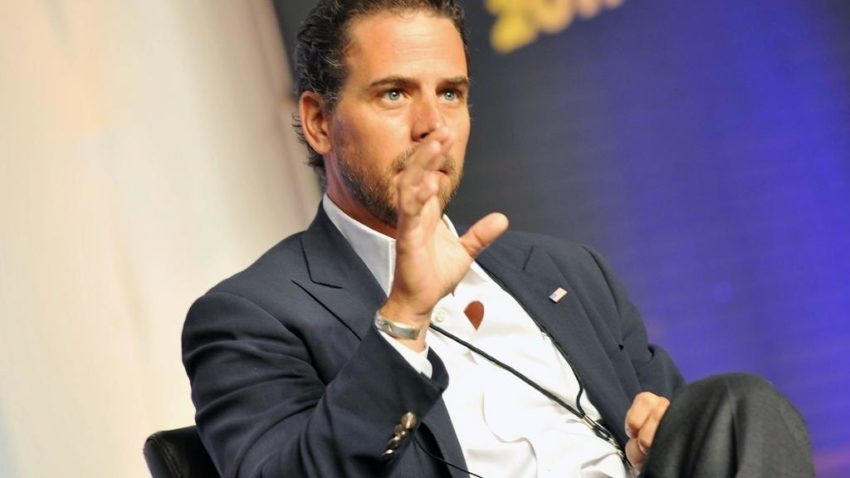 Hunter Biden — the son of former Vice President Joe Biden, and the figure at the heart of President Donald Trump’s efforts to have Ukraine investigate the former vice president — will step down from the board of a Chinese private equity company he has invested in later this month, his lawyer announced in a statement Sunday.

Trump has alleged, without evidence, that Joe Biden used the power of the vice presidency to help Hunter Biden and his business interests in Ukraine, and has also claimed the former vice president assisted his son in making a large business deal in China. The president’s calls for Ukraine and China to investigate these allegations sparked a political maelstrom that kicked off an impeachment inquiry into Trump.

Joe Biden has maintained he did nothing wrong as vice president, and has argued against all claims his son benefited from his office. Sunday, through his lawyer George Mesires, the younger Biden seemed to acknowledge his business dealings had placed heightened scrutiny on his father, while also defending his actions. In a statement, Mesires also explained how Hunter Biden planned to avoid even the appearance of conflicts of interest going forward.

First, the younger Biden pledged to cease all work with any foreign-owned companies in the event that his father is elected president in 2020, Mesires wrote. And ahead of that eventuality, Hunter Biden has said he will step down from the board of BHR (Shanghai) Equity Investment Fund Management Company, a private equity company backed by Chinese state-owned companies.

Trump and his personal lawyer, Rudy Giuliani, have claimed that Biden leveraged his father’s position as vice president to earn $1.5 billion from Chinese investors. In actuality, that figure is the amount the company hoped to net in early fundraising rounds — according to the Wall Street Journal, it missed that target.

Hunter Biden claims he has not made any money at all in his dealings with the firm. The statement says that Biden’s board work was unpaid and that his financial stake in BHR, which he acquired in 2017, involved a personal investment of about $420,000. The statement claims that Biden received no return on this investment, and that he had no role in the company’s decision making.

To avoid questions of whether his work creates a conflict of interest for his father, the statement says Biden plans to resign from the BHR board by the end of this month; it does not specify whether he will give up his stake in the firm, however.

Hunter Biden had business dealings in Ukraine, and says there’s nothing wrong with that

Before Trump began to attack the Bidens for Hunter’s work in China, he and key allies like Giuliani were fixated on Hunter Biden’s work with Burisma Holdings Limited, a natural gas producer in Ukraine.

In fact, Biden’s Burisma board position is at the center of the impeachment inquiry into Trump: On July 25, Trump repeatedly asked the newly-elected Ukrainian president, Volodymyr Zelensky, to investigate the Biden family. In public remarks since, Trump has argued that Hunter Biden enriched himself through the board position, and that then Vice President Joe Biden halted an investigation into one of Burisma’s owners, who faced allegations of money laundering, in order to protect his son.

There is no evidence this is the case. Hunter Biden sat on the Burisma board from April 2014 (while the company was already under investigation) until April 2019. And as vice president, Joe Biden, like much of the international community, advocated for more aggressive anti-corruption investigations in Ukraine.

In the statement released Sunday, Mesires argues Biden was appointed a Burisma board member due to his experience on other boards, says there was nothing wrong with Biden serving on the board, and denies Biden was involved in any illegal activity during his time with Burisma.

“Despite extensive scrutiny, at no time has any law enforcement agency, either domestic or foreign, alleged that Hunter engaged in wrongdoing at any point during his five-year term,” the statement reads.

As Vox’s Matthew Yglesias notes, Biden was on a number of other boards, including the board of Amtrak. Trump and other Republicans have argued Biden did not have the requisite experience to be on any board at all, and that this is somehow further evidence of wrongdoing on Joe Biden’s part. But as Vox’s Sean Collins notes, there is a line between the cushy jobs that get handed out to Washington insiders — especially relatives of politicians, even those who are black sheep within political dynasties — and true corruption.

While it may be the case that, as Yglesias put it, “Hunter Biden’s whole career is being Joe Biden’s son,” as Mesires points out, there is nothing illegal about that.

Trump maintains Hunter and Joe Biden have engaged in misconduct

The fact that Hunter Biden seems to have done little more than rely on his family name to help advance his business interests has not stopped those dealings from becoming a political cudgel on the campaign trail of late. At a rally in Minneapolis on Thursday, for example, Eric Trump — one of the president’s sons — led the crowd into a chant of “Lock him up,” a mantra reminiscent of the famous chants about Hillary Clinton during the 2016 presidential campaign.

Trump has also attempted to connect Hunter Biden’s business dealings in both China and Ukraine in order to posit something of a global conspiracy, and continues to call on both countries to investigate Hunter.

This focus has led to House Democrats beginning an impeachment inquiry into the president. But while he has fought that inquiry, Trump has not stopped working to hold up Hunter’s business relationships as evidence of corruption within the Biden family — and thus attack the presidential aspirations of Joe.

These attacks have also served to highlight a Washington culture Trump promised to reform by “draining the swamp.” Although he and his children have also been accused of financially benefiting from his office, in pushing claims of a Biden scandal, Trump, as Vox’s Matt Yglesias writes, speaks to the majority of voters, who are concerned about corruption in Washington:

[T]he kid who trades on family connections to make money is much more a case of business as usual than an extraordinary scandal. “Business as usual in Washington,” however, is normally the subject of scorn in American politics. Any focus on Joe Biden’s son is likely to remind people of at least some of what they don’t like about it.

For the last few weeks, as the impeachment inquiry has intensified, Hunter Biden himself has kept a relatively low-profile. In releasing this statement, and promising to eliminate any apparent or real conflicts of interest, it seems he is taking seriously the public’s distaste for that sort of business as usual, and seems to be taking steps to avoid being at the center of similar situations in the future.