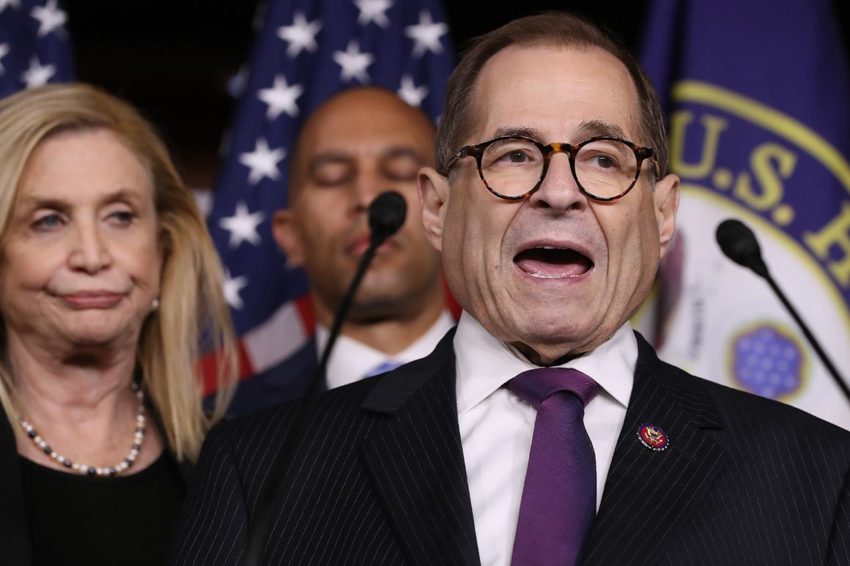 House Judiciary Chairman Jerry Nadler had a blunt message as he privately addressed Democrats the day before his panel assumes a starring role in the impeachment inquiry.

“I’m not going to take any shit,” Nadler said in a closed-door prep session Tuesday morning — a rare cuss word from the lawyerly Manhattan Democrat that prompted some lawmakers to sit up in their chairs, according to multiple people in the room.

Nadler’s warning shot referred to likely GOP antics to try to undermine the first impeachment hearing in the Judiciary Committee on Wednesday. But it wasn’t lost on Democrats that Nadler’s message could also apply to those in his own party who have closely scrutinized his role in the House’s impeachment probe

While President Donald Trump may be under investigation, Nadler will be on the hot seat.

The veteran lawmaker has at times struggled to balance the competing interests and expectations of his caucus and leadership on an impeachment push that once sharply divided the party. Those internal tensions have largely faded, with Speaker Nancy Pelosi and her caucus unified around evidence that Trump abused his office by pressuring Ukrainian leaders for his own political gain.

But after a series of impeachment hearings in the Intelligence Committee that were widely praised, Democrats are eager to keep up the momentum as the Judiciary Committee takes control.

Democrats are moving quickly, with the panel likely to write the articles of impeachment in the coming weeks and leadership hoping to hold a full House vote to impeach the president by Christmas. Any missteps could undermine the party’s drive.

“He’s as steady as a rock,” said Rep. Val Demings (D-Fla.), who sits on the Judiciary and Intelligence panels.

The Judiciary Committee, led by Nadler and his staff, spent much of Tuesday holding a dress rehearsal in the storied Ways and Means Committee hearing room. The Intelligence Committee held all of its impeachment hearings in that room — one of the largest and grandest in the Capitol — and Judiciary is following suit, at least for its first hearing.

During the six-hour prep session, Democrats held a mock hearing during which former Capitol Hill staffers were brought in to play GOP attack dogs on the committee, including Reps. Jim Jordan of Ohio and ranking member Doug Collins of Georgia.

Around lunchtime as Judiciary Democrats noshed on tacos, the Intelligence Committee released its long-awaited final report on the Ukraine investigation. Democrats in the room immediately began pulling up the executive summary on their phones, many of them seeing the report for the first time, according to lawmakers.

Judiciary members have been eagerly awaiting the return of their committee — and their chairman — to the public stage, with more than half the nation now siding with them on impeachment according to public surveys.

Democrats on the panel insist they aren’t nervous about the first hearing, saying privately that the format has been tightly coordinated with leadership and they don’t expect a slate of constitutional experts to be combative witnesses. But Nadler’s reappearance at the center of the impeachment probe doesn’t come without risks, some lawmakers said.

The panel’s last high-profile hearing in September — featuring a defiant Corey Lewandowski — was widely panned as a disaster. And even before that, many Democrats were privately dismayed about what they saw as juvenile antics on their side, including Rep. Steve Cohen of Tennessee chowing down on a bucket of chicken at the dais after Attorney General William Barr refused to show up to a hearing.

The discord led to clashes with leadership, including Pelosi, who privately complained to her leadership team that Nadler should have punished Lewandowski on the spot.

There are also some lingering fears among rank-and-file Democrats, including vulnerable freshmen, about Nadler’s approach. These lawmakers had complained that Nadler was leaning too hard into impeachment in the wake of Robert Mueller’s report over the summer, without the support of many in his caucus.

The outcome of Wednesday’s hearing is likely to set the tone for the final phase of impeachment — at least three hearings, including a possible session next week at which lawmakers are expected to approve articles of impeachment.

Rep. Eric Swalwell of California, who sits on the Judiciary and Intelligence panels, said Democrats intend to showcase “seriousness” on Wednesday in the face of any GOP stunts.

“There’s a sense that the facts are clearly on our side, so showing people that the process is fair, I think, is important. The process has to be as persuasive as the facts,” Swalwell said, adding that one of the goals is “making clear that if [Trump] wants to be there, he can be there.”

Republicans on the panel held their own practice session Tuesday, where members could test out their lines of attack for the next day’s hearing. Several of the GOP members, including Jordan, Collins and Rep. Andy Biggs of Arizona, are fierce defenders of Trump and are expected to make the hearing as difficult as possible for Democrats through various procedural shenanigans.

In the closed-door rehearsal, Nadler told his colleagues that he intended to ignore the bait and refuse to engage with GOP obstruction tactics while stressing the “solemn duty” of the panel.

He also made clear that other members should not let themselves be dragged into the crossfire, urging them to simply let the Republicans use their five-minute questioning time any way they want. Democrats want to avoid any distraction from the panel’s four witnesses — all of whom are law professors — as they lay out the historical context of presidential impeachment proceedings.

Nadler’s allies on the committee say he has practice keeping his panel in line in the politically treacherous debate on impeachment.

Some members of the Judiciary Committee were aggressively advocating impeachment after Mueller concluded his probe into Russian interference in the 2016 presidential election, even as the majority of the caucus remained unconvinced. While Nadler also had pushed for action, he never publicly broke with Pelosi and averted a total rebellion in his committee.

The dynamics on impeachment changed instantly after an anonymous whistleblower complaint surfaced in September, which claimed that Trump and his inner circle had sought to strong-arm a foreign power to interfere in the 2020 election.

As the Democratic probe into the episode unfolded, Pelosi — who is known for a top-down governing approach — further tightened her inner circle. The Judiciary panel was largely left out of the planning, according to multiple Democratic lawmakers and aides, though people close to Pelosi and Nadler said there have been ongoing talks throughout the inquiry.

After Pelosi announced the launch of an impeachment inquiry in late September, Intelligence Chairman Adam Schiff became the public face of the probe and Nadler was relegated to a supporting role.

Democratic aides contend it was a natural transition for Schiff to take the lead on an issue that originated in the intelligence community. But Nadler has been even more absent than some Democrats expected.

While Schiff was appearing alongside Pelosi at news conferences in recent weeks, Nadler was tight-lipped, declining to provide reporters with details about his committee’s upcoming role in the inquiry. Members of the panel said there was little guidance given until recently, even to Nadler, as Pelosi maintained a tight grip on the process.

Nadler’s colleagues on the Judiciary panel, meanwhile, have continued to fiercely defend their chairman. And outside of Washington, progressive activists have credited Nadler and the Judiciary Committee for keeping impeachment alive when Pelosi and her leadership team were fiercely opposed.

They say his work in the Mueller investigation — with the help of blockbuster appearances from ex-Trump confidants like Michael Cohen arguing that the White House obstructed justice — has helped strengthen Democrats’ overall case against Trump.

“Tomorrow is a very important day, a very solemn day,” said Rep. Veronica Escobar (D-Texas) during a break from the prep session. “Many of us have said it over and over again, we didn’t come here to impeach the president. But we did come here to uphold our constitutional duty and oath.”

Andrew Desiderio contributed to this report.