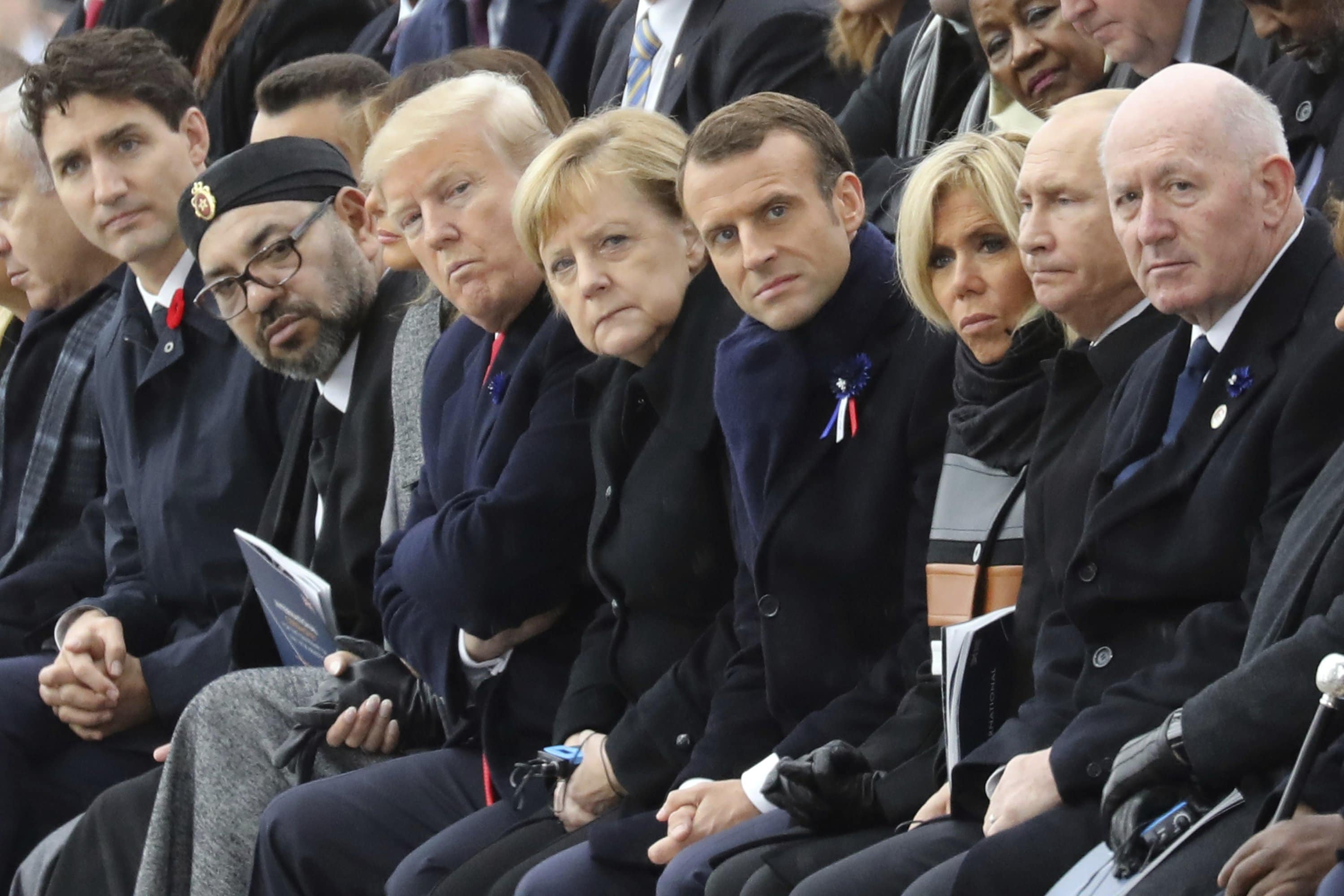 World leaders with the power to make war but a duty to preserve peace solemnly marked the end of World War I’s slaughter 100 years ago at commemorations Sunday that drove home the message “never again” but also exposed the globe’s new political fault lines.

As Donald Trump, Vladimir Putin and dozens of other heads of state and government listened in silence, French President Emmanuel Macron used the occasion, as its host, to sound a powerful and sobering warning about the fragility of peace and the dangers of nationalism and of nations that put themselves first, above the collective good.

“The old demons are rising again, ready to complete their task of chaos and of death,” Macron said.

“Patriotism is the exact opposite of nationalism. Nationalism is a betrayal of patriotism,” he said. “In saying ‘Our interests first, whatever happens to the others,’ you erase the most precious thing a nation can have, that which makes it live, that which causes it to be great and that which is most important: Its moral values.” 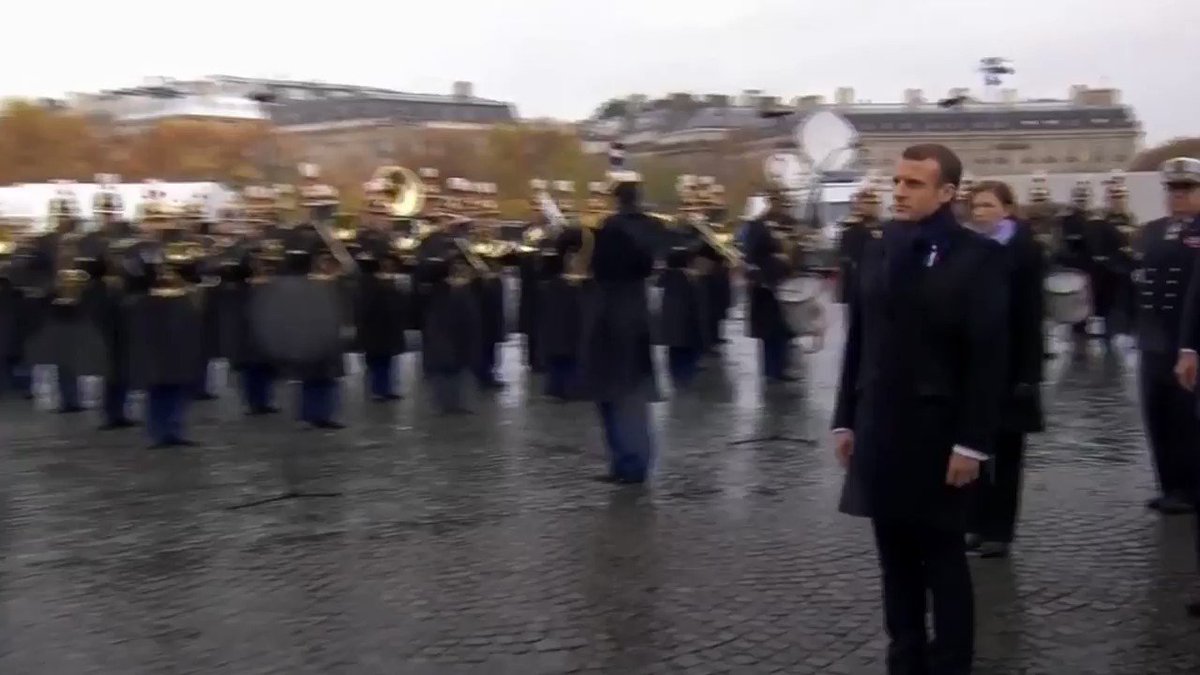 Trump, ostensibly the main target of Macron’s message, sat stony-faced. The American president has proudly declared himself a nationalist. But if Trump felt singled out by Macron’s remarks, he didn’t show it. He later described the commemoration as “very beautiful.”

As well as spelling out the horrific costs of conflict to those with arsenals capable of waging a World War III, the ceremony also served up a joyful reminder of the intense sweetness of peace, when high school students read from letters that soldiers and civilians wrote 100 years ago when guns finally fell silent on the Western Front.

Brought alive again by people too young to have known global war themselves, the ghostly voices seemed collectively to say: Please, do not make our mistakes.

“I only hope the soldiers who died for this cause are looking down upon the world today,” American soldier Capt. Charles S. Normington wrote on Nov. 11, 1918, in one of the letters. “The whole world owes this moment of real joy to the heroes who are not here to help enjoy it.” 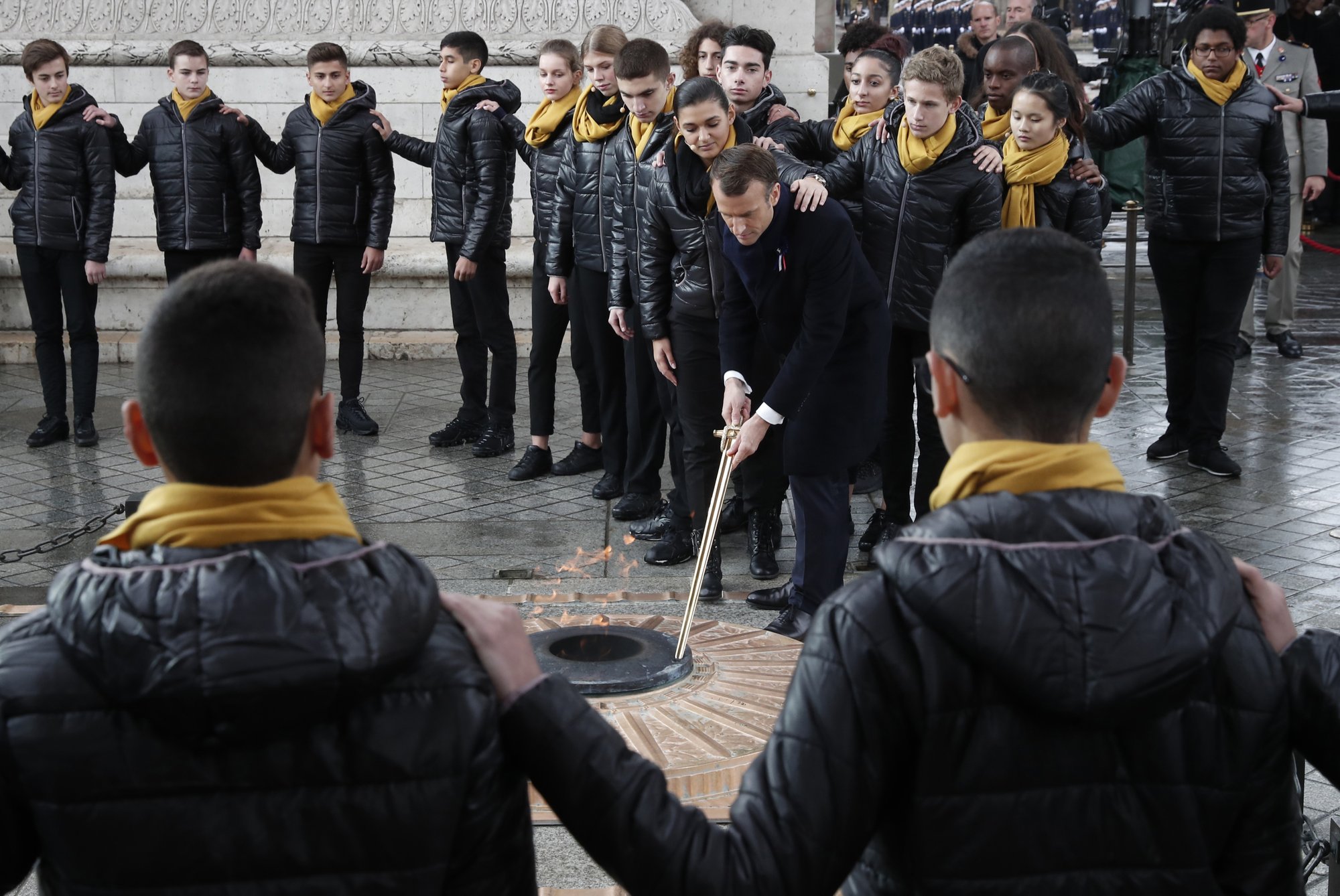 A highlight of the ceremony was when teenagers who have never known global war read excerpts from letters written on the day World War I ended. Here, Macron is shown re-lighting the flame at the Tomb of the Unknown Soldier. (Benoit Tessier/Pool Photo via AP).

The Paris weather — gray and damp — seemed aptly fitting when remembering a war fought in mud and relentless horror.

The commemorations started late, overshooting the centenary of the exact moment when, 100 years earlier at 11 a.m., an eerie silence replaced the thunder of war on the front lines. Macron recalled that 1 billion shells fell on France alone from 1914-1918.

As bells marking the armistice hour rang across Paris and in many nations ravaged by the four years of carnage, Macron and other leaders were still on their way to the centennial site at the Arc de Triomphe.

Under a sea of black umbrellas, a line of leaders led by Macron and his wife, Brigitte, marched in silence on the cobbles of the Champs-Elysees, after dismounting from their buses. 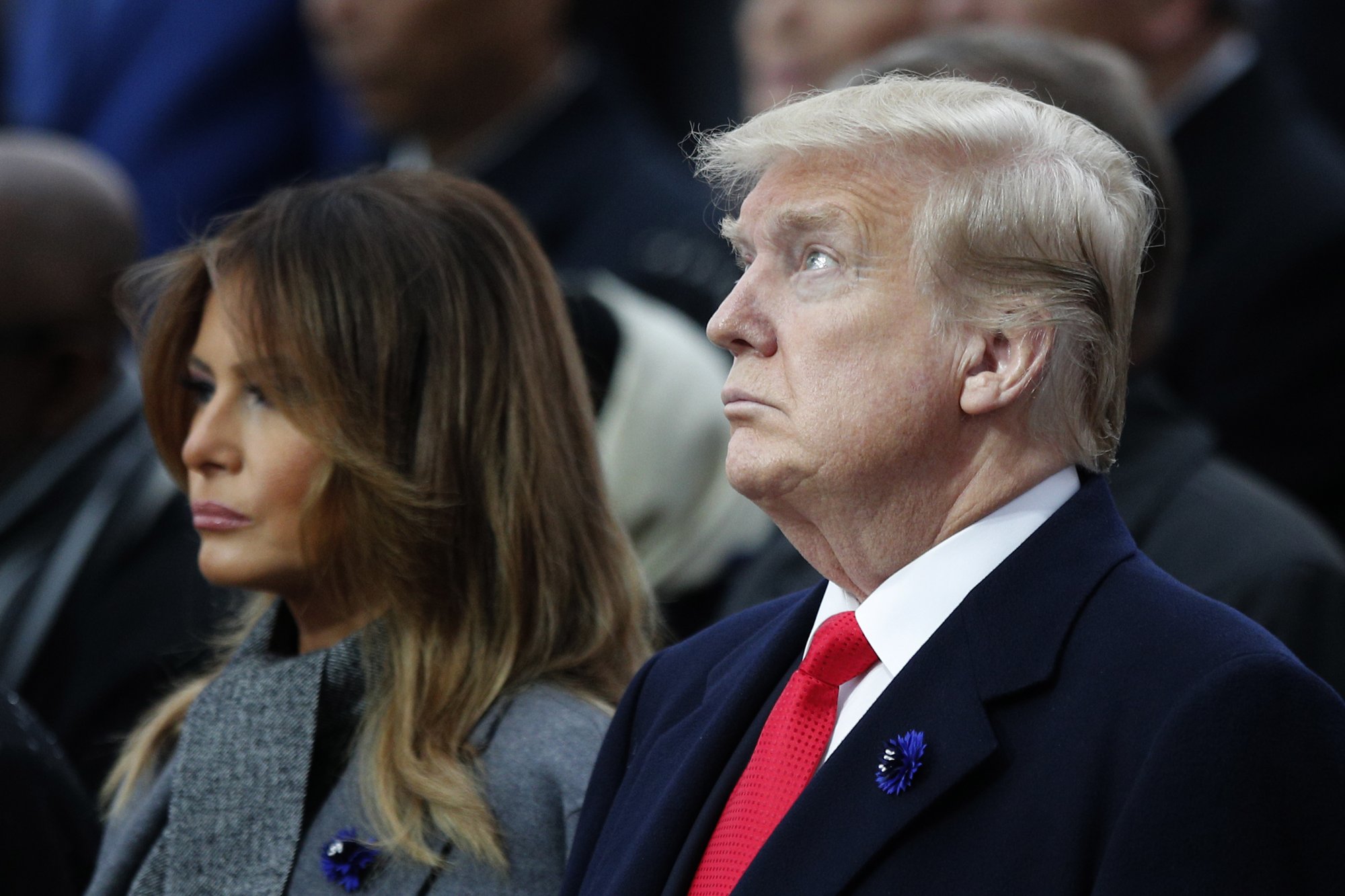 Trump and his wife, Melania, were seated at the ceremony between the German chancellor, Angela Merkel, and Morocco’s King Mohammed VI. (AP Photo/Francois Mori).

Trump arrived separately, in a motorcade that drove past three topless protesters with anti-war slogans on their chests who somehow got through the rows of security and were quickly bundled away by police. The Femen group claimed responsibility. French authorities said the three women faced charges of sexual exhibitionism. White House press secretary Sarah Huckabee Sanders cited security protocols for the presidential motorcade’s solo trip down the grand flag-lined avenue, which was closed to traffic.

Last to arrive was the Russian president, Putin, who shook Trump’s hand and flashed him a thumbs-up. German Chancellor Angela Merkel was positioned in pride of place between Trump and Macron, an eloquent symbol of victors and vanquished now standing together, shoulder to shoulder. Overhead, fighter jets ripped through the sky, trailing red, white and blue smoke in homage to the French flag. 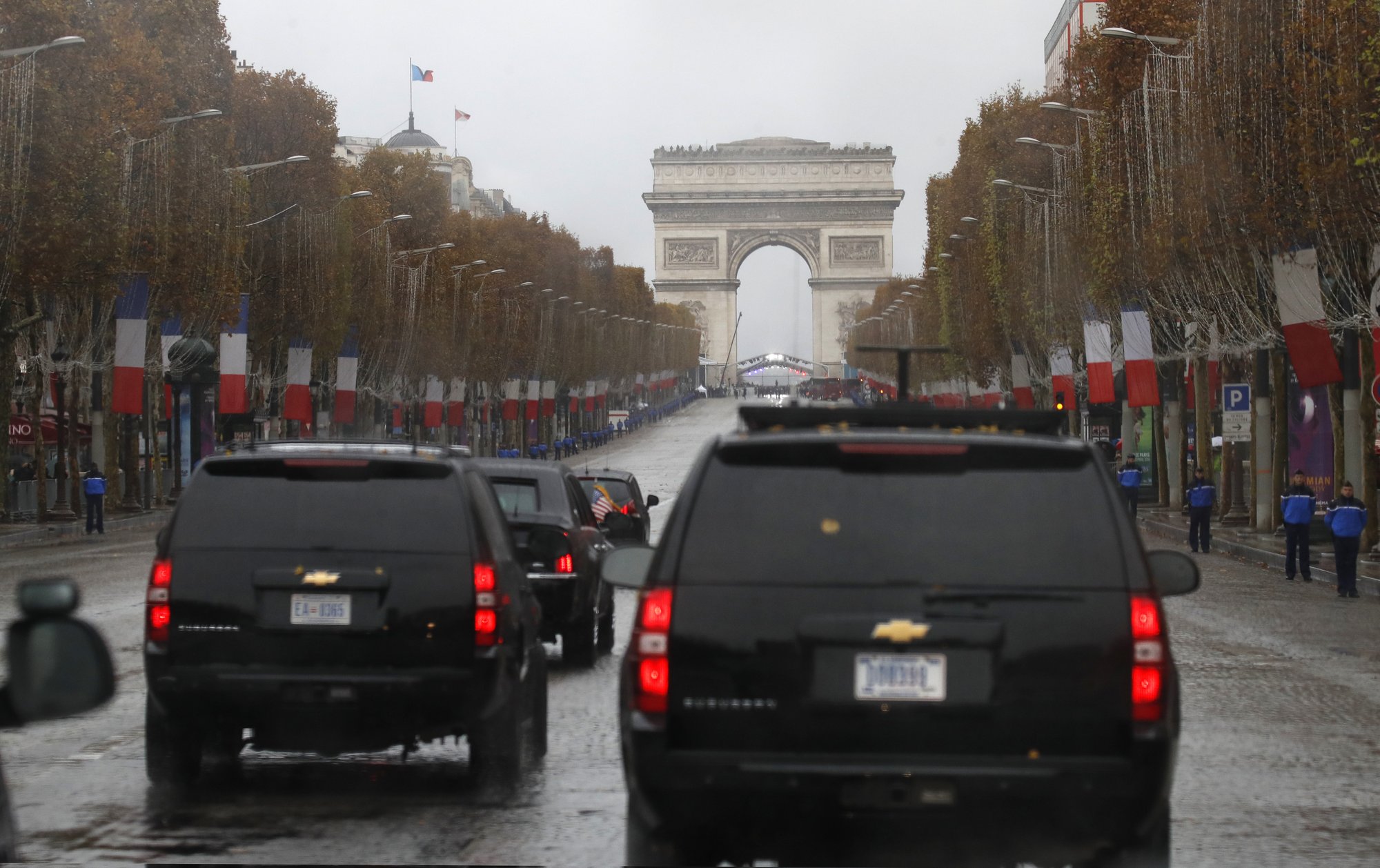 Trump’s motorcade rolled solo up the Champs-Elysees. It was unknown whether the president saw the topless protesters. (AP Photo/Jacquelyn Martin).

The geographical spread of the more than 60 heads of state and government who attended, silent and reflective, showed how the “war to end all wars” left few corners of the earth untouched but which, little more than two decades later, was followed so quickly and catastrophically by the even deadlier World War II.

On the other side of the globe, Australia and New Zealand held ceremonies to recall how the war killed and wounded soldiers and civilians in unprecedented numbers and in gruesome new, mechanized ways.

Those countries lost tens of thousands of soldiers far away in Europe and, most memorably in the 1915 battle of Gallipoli, in Turkey. In central London, Britain’s Queen Elizabeth II, clad in black, watched from a balcony as her son Prince Charles laid a wreath on her behalf at the foot of the Cenotaph memorial that honors the fallen. Britain had 880,000 military dead in the war.

The gulf between Trump’s “America First” credo and European leaders was starkly underscored again later Sunday when Trump went his own way.

He visited an American cemetery outside Paris at precisely the moment that Macron, Merkel and other dignitaries were opening a peace forum where the French leader again sounded the alarm about crumbling international harmony as he ruminated about the legacy of the morning’s commemorations.

“Will it be the shining symbol of durable peace between nations or will it be a picture of a last moment of unity before the world goes down in new disorder?” Macron asked. “It depends only on us.”

The ceremonies put Macron and his wife, Brigitte, in center stage, as hosts of the 60-plus heads of state and government who converged on Paris.

While praising France for “a wonderful two days,” Trump described his rainy stop at the American cemetery at Suresnes as “the highlight of the trip.”

On Saturday, Trump drew criticism for canceling a separate commemorative visit to the Belleau Wood battleground northeast of Paris because of rain. 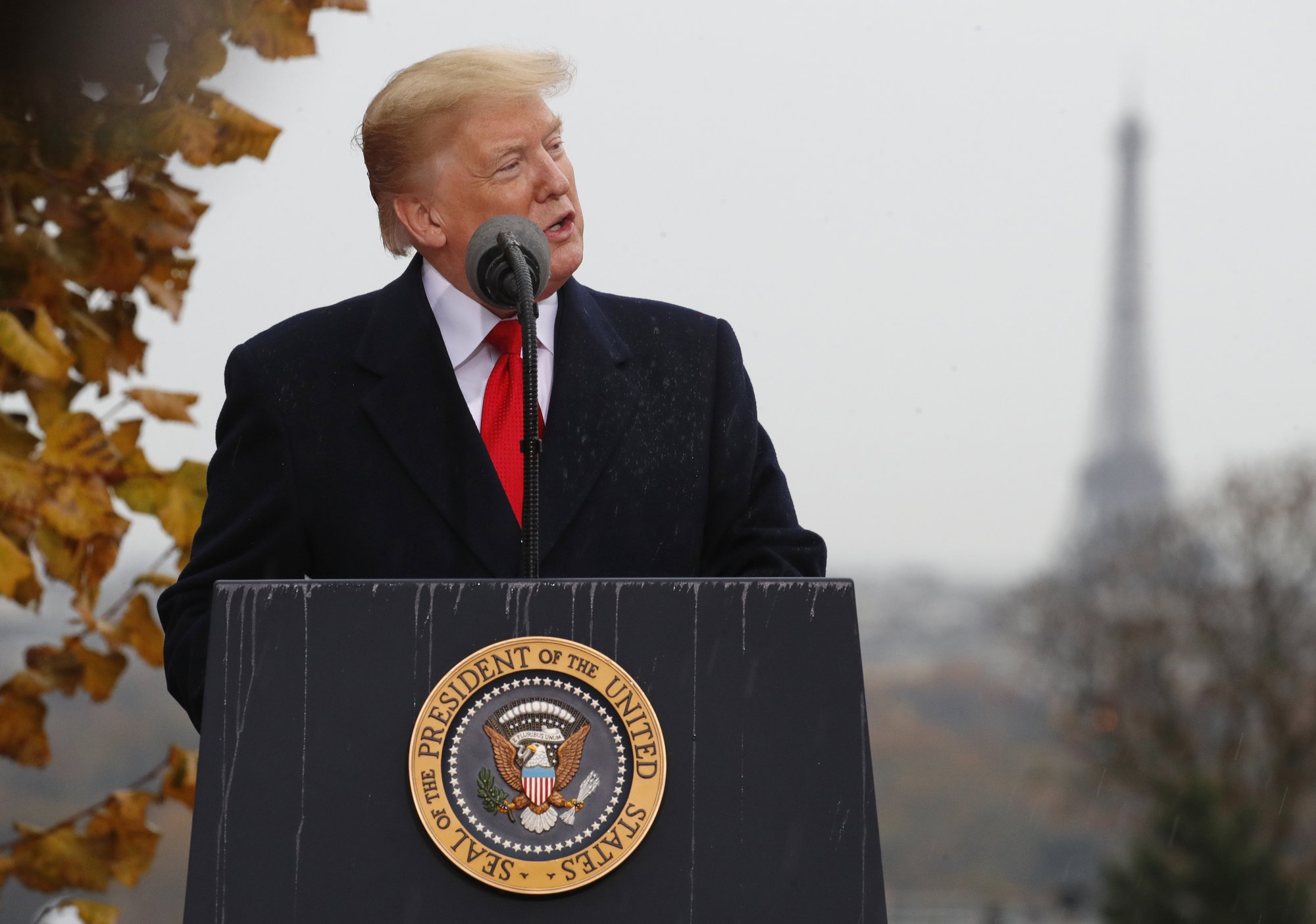 At the Suresnes cemetery, the burial ground for more than 1,500 Americans who died in World War I, Trump paid tribute to the U.S. and allied soldiers. “It is our duty to preserve the civilization they defended and to protect the peace they so nobly gave their lives to secure,” he said. (AP Photo/Jacquelyn Martin).

Remembered for brutal trench warfare and the first use of chemical weapons, WWI pitted the armies of France, the British Empire, Russia and the U.S. against a German-led coalition that included the Austro-Hungarian and Ottoman empires. Almost 10 million soldiers died, sometimes tens of thousands on a single day.

The U.S. came late to the war, in April 1917, but over 1½ years it became a key player and tipped the scales for the allies. At the war’s end, the U.S. had 2 million troops in Europe and another 2 million ready to cross the Atlantic if needed, a force that turned the United States into a major military power whose soldiers then fought and died again for Europe in World War II. 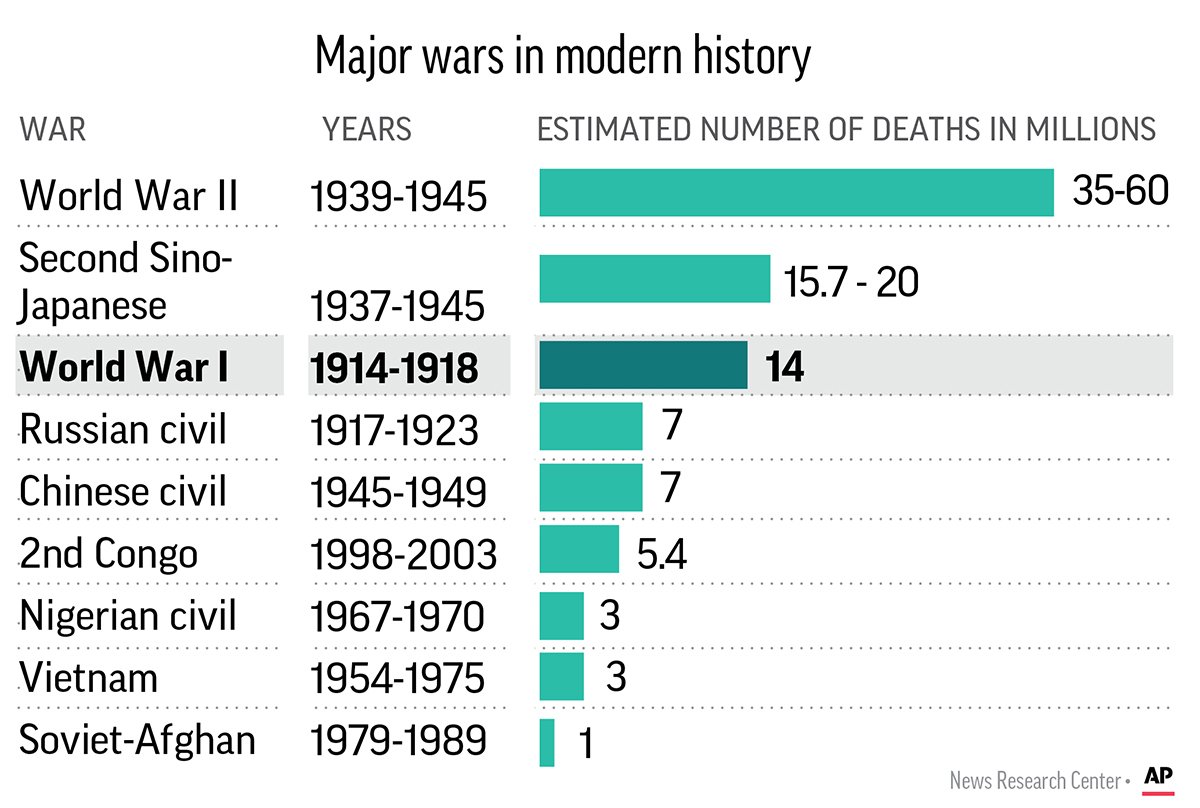 A terrible toll: The tens of millions of dead in 20th-century wars.

Even though Germany was at the heart of provoking two world wars over the past century, the nation has become a beacon of European and international cooperation since.

With so many leaders in Paris, the commemoration also provoked a flurry of diplomacy on the sidelines, with conflict in Yemen and Syria among the hot-button issues.

On Sunday, Merkel met with the head of the United Nations, an organization born from the ashes of World War II, and the president of Serbia. It was a Serb teenager, Gavrilo Princip, who assassinated the Austro-Hungarian crown prince in Sarajevo in 1914 to set off events which led to the outbreak of war. 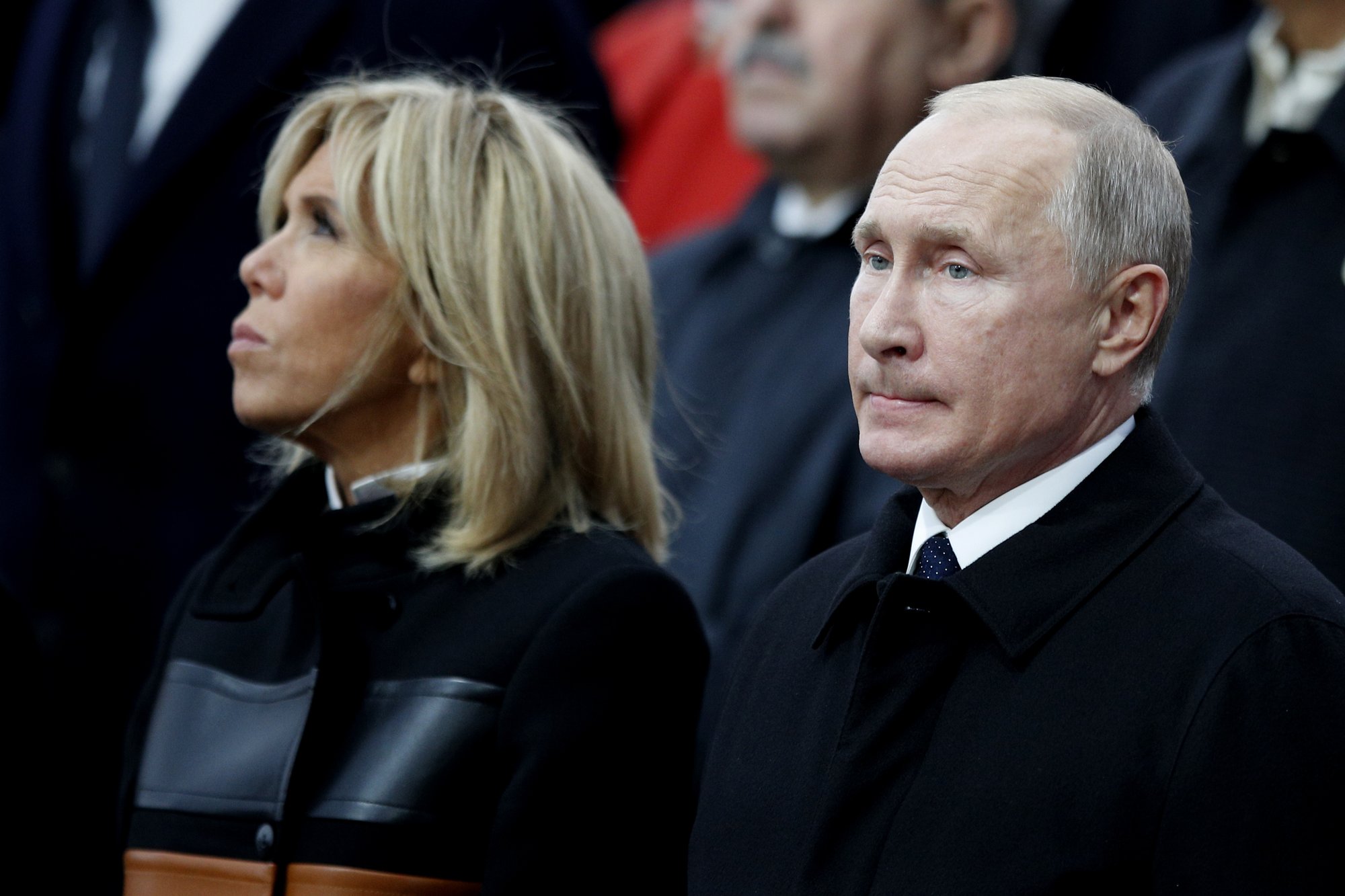