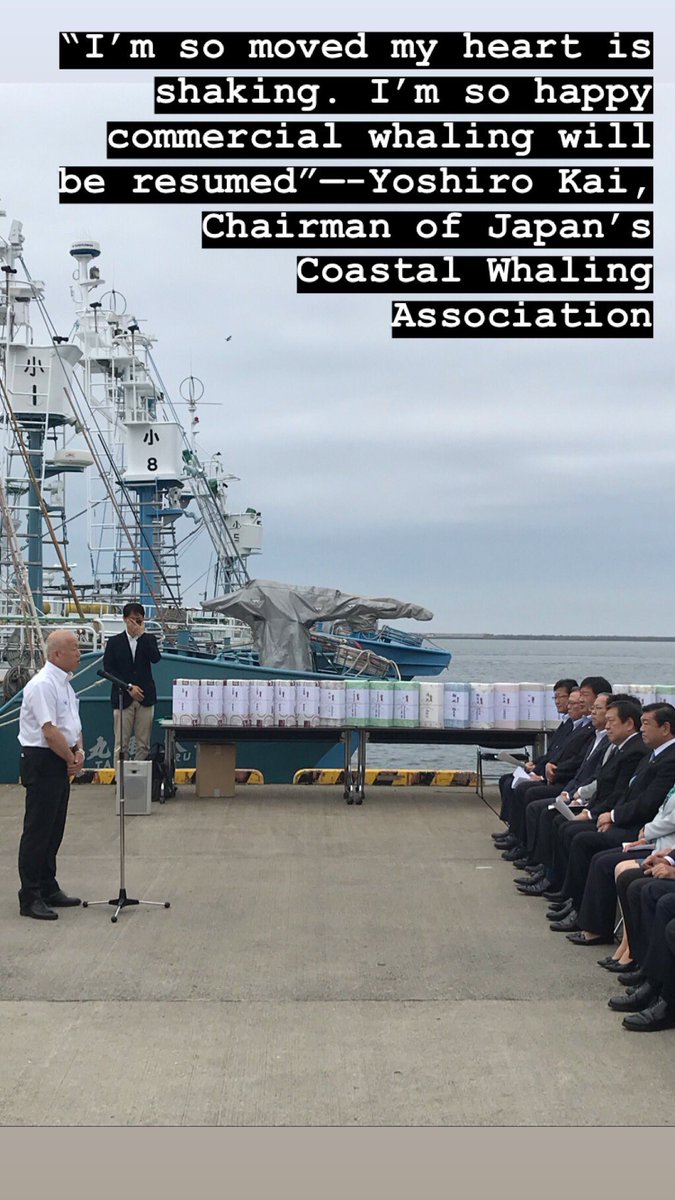 Japanese fishermen have set sail to hunt whales commercially for the first time in more than three decades, following Tokyo’s controversial decision to withdraw from the International Whaling Commission.

Together they will kill 227 whales through to late December, according to the fisheries agency, which had delayed announcing the quota until the conclusion of the G20 summit in Osaka on Saturday. The quota includes 52 minke, 150 Bryde’s and 25 sei whales, the agency said.

The hunts are likely to spark criticism from environmentalists and anti-whaling countries, but whaling officials were in celebratory mood.

“My heart is overflowing with happiness, and I’m deeply moved,” Yoshifumi Kai, head of the Japan Small-Type Whaling Association, said at a ceremony attended by politicians, local officials and whalers.

Kai, a senior fisheries official in Taiji – whose annual dolphin hunts have caused an international outcry – added: “This is a small industry, but I am proud of hunting whales. People have hunted whales for more than 400 years in my home town.”

Japan was the target of international criticism for using a clause in the IWC’s 1986 moratorium on commercial whaling to conduct “research” whale hunts in the Antarctic.

Meat from the hunts was sold on the open market, prompting claims that they were a cover for commercial whaling. 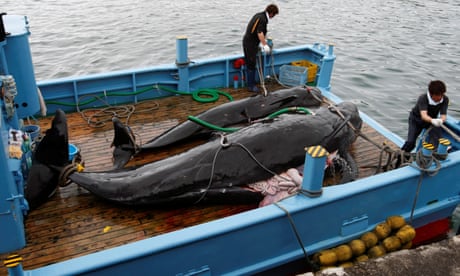 Late last year Japan announced it would leave the IWC, frustrated by its failure to convince other members to support a return to “sustainable” commercial whaling.

Japan’s whalers killed 333 minke whales during their final “research” expedition to the Antarctic, which ended in March. In previous years, however, it slaughtered almost 1,000 whales a year, amid confrontations on the high seas with the marine conservation group Sea Shepherd.

Fishermen from Abashiri, Taiji , Ishinomaki and Minamiboso – all towns with a whaling tradition – will take part in the commercial hunt in Japan’s exclusive economic zone. Japan will no longer send fleets to the Antarctic every winter following its official withdrawal from the IWC on Sunday.

“I’m a bit nervous but happy that we can start whaling,” Hideki Abe, a 23-year-old whaler from Ishinomaki, told Agence France-Presse just before the fleet departed.

“I don’t think young people know how to cook and eat whale meat any more. I want more people try to taste it at least once.”

Fisheries officials are hoping that the resumption of commercial whaling will spark renewed interest in whale meat among Japanese consumers.

“From today, I’d like the whalers to catch whales by observing the quota and aim for revival of the whaling industry,” the fisheries minister, Takamori Yoshikawa, said at a ceremony in Shimonoseki, according to the Kyodo news agency.

While a return to whaling for profit has long been a cause celebre for conservative politicians, Japanese consumers have lost their appetite for whale meat, which can be served deep-friend or raw as sashimi.

Domestic consumption of whale meat was around 200,000 tons a year in the 1960s, when it was an important source of protein in he postwar years, but has slumped to less than 5,000 tons annually in recent years, according to government data.

Tokyo’s withdrawal from IWC ended its most provocative expeditions, in protected Antarctic waters, and while it sparked a firestorm of criticism, some campaigners say it is the first step towards the end of Japanese whaling.

Patrick Ramage, director of marine conservation at the International Fund for Animal Welfare, said the resumption of commercial whaling “will not magically increase market demand”.

“The palates of the Japanese people have moved on,” Ramage told the Guardian. “They have lost their yen for whale meat, even as their government has spent billions in taxpayer yen trying to prop up this economic loser. What we are seeing is the beginning of the end of Japanese whaling.”

As the crisis escalates…

… in our natural world, we refuse to turn away from the climate catastrophe and species extinction. For The Guardian, reporting on the environment is a priority. We give reporting on climate, nature and pollution the prominence it deserves, stories which often go unreported by others in the media. At this pivotal time for our species and our planet, we are determined to inform readers about threats, consequences and solutions based on scientific facts, not political prejudice or business interests.

More people are reading and supporting The Guardian’s independent, investigative journalism than ever before. And unlike many new organisations, we have chosen an approach that allows us to keep our journalism accessible to all, regardless of where they live or what they can afford. But we need your ongoing support to keep working as we do.

The Guardian will engage with the most critical issues of our time – from the escalating climate catastrophe to widespread inequality to the influence of big tech on our lives. At a time when factual information is a necessity, we believe that each of us, around the world, deserves access to accurate reporting with integrity at its heart.

Our editorial independence means we set our own agenda and voice our own opinions. Guardian journalism is free from commercial and political bias and not influenced by billionaire owners or shareholders. This means we can give a voice to those less heard, explore where others turn away, and rigorously challenge those in power.

We need your support to keep delivering quality journalism, to maintain our openness and to protect our precious independence. Every reader contribution, big or small, is so valuable. Support The Guardian from as little as $1 – and it only takes a minute. Thank you.