U.S. employers dramatically stepped up their hiring in December, adding 312,000 jobs in an encouraging display of strength for an economy in the midst of a trade war, slowing global growth and a partial shutdown of the federal government.

The Labor Department said Friday that the unemployment rate rose slightly to 3.9 percent, but that reflected a surge in jobseekers— a positive for growth.

Average hourly pay improved 3.2 percent from a year ago, up from average wage growth of 2.7 percent at the end of 2017.

The jolt in hiring offers a dose of reassurance after a tumultuous few months as the outlook from the financial markets has turned decidedly bleaker. Job growth at this pace is a sign that the economy will continue to expand for a 10th straight year, even if overall growth slows somewhat because of the waning stimulus from President Donald Trump’s tax cuts. 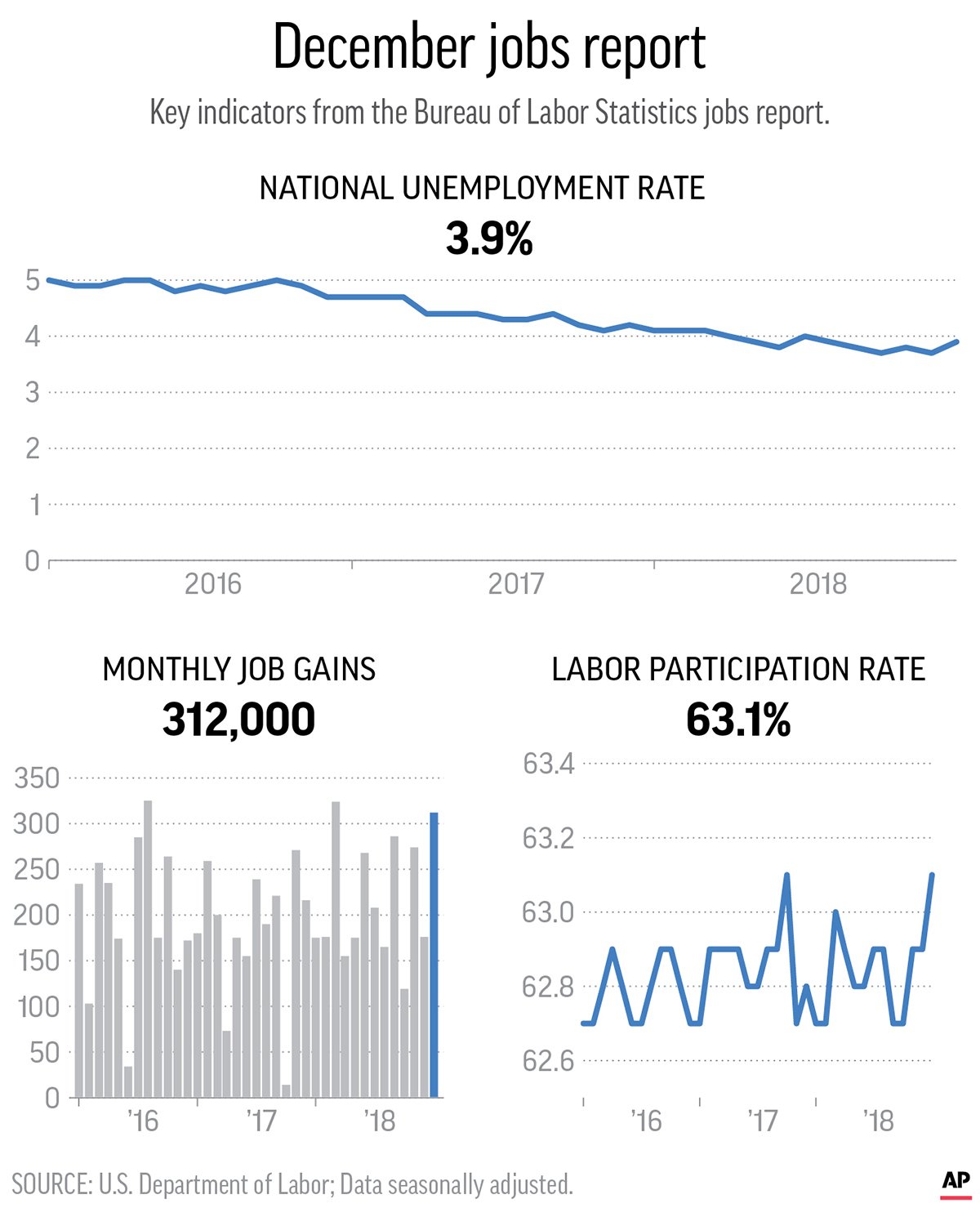 “The labor market is very strong even though the economy appears to be slowing,” said Eric Winograd, senior U.S. economist at the investment management firm AllianceBernstein. “Those two things cannot coexist for very long. Either weakening demand will lead firms to dial back the pace of hiring or the robust pace of hiring will lead firms to ramp back up production.”

Stocks jumped Friday in response to the jobs figures. The Dow Jones industrial average climbed roughly 450 points in morning trading, an increase of about 2 percent.

But in recent weeks, financial markets have been increasingly worried about the path of economic growth this year. The Dow suffered its worst December decline since the middle of the Great Depression in 1931 as surveys of economists and business leaders suggested the United States could be in a recession by 2020.

Major companies such as Apple say their sales are being jeopardized by the tariff-fueled trade war between the United States and China. Factory activity in China and the United States have both weakened, with the Institute for Supply Management’s U.S. manufacturing index on Thursday posting its steepest decline in a decade.

China, the world’s second largest economy, is also mired in a slowdown as its consumers have become cautious, losing much of their appetite for real estate, iPhones, Ford vehicles and jewelry from Tiffany & Co.

The government is about to enter its third week of a partial shutdown, with negotiations stalled over President Donald Trump’s insistence that Democrats agree on funding for a wall along the border with Mexico. And attacks by Trump on the Federal Reserve over its rate increases have raised doubts about Chairman Jerome Powell’s status — a concern for both the markets and the economy.

The expected continuation of steady job growth suggests that such risks might be — for the moment, anyway — overblown. However, the stock market will have to weigh whether the strong job growth encourages the Fed to hike rates in 2019 more frequently than investors had previously anticipated.

President Donald Trump called the job growth “GREAT” on Twitter. But Kevin Hassett, chairman of the White House Council of Economic Advisers, told reporters on Thursday that the next jobs report for January could be weak if the partial government shutdown continues.

There could be hundreds of thousands of government workers who could say they’re not working, which would lower the job totals.

“So when we see the January jobs number, it could be a big negative,” said Hassett, even though those workers would be paid back wages once the government fully re-opened.

Fresh Coat Painters, based in Cincinnati, plans to nearly double the 300 employees who paint homes and businesses as it expands this year across this country. This franchiser is also launching an apprenticeship program to attract workers, in addition to providing higher pay and benefits.

Tara Riley, president of Fresh Coat, said that franchise owners were having to actively search for workers instead of simply posting ads in hope of finding workers.

“We realized it was a mindset change: you have to be recruiting, rather than hiring,” Riley said.

Despite the increase in the unemployment rate, the influx of people searching for work coupled with the job gains is an indication that the rate should decline in the coming months. Economists estimate that it requires roughly 100,000 job gains each month to satisfy population growth and keep the unemployment rate at its current level.

Hiring has easily eclipsed that pace. In 2018, employers added 2.6 million jobs, or an average of nearly 217,000 a month, according to the Labor Department.

At some point, even if the economy remains healthy, monthly job gains will likely downshift to a more gradual pace. This is because there is a dwindling pool of unemployed people searching for work after several years of solid hiring. There were 6.3 million people looking for a job in December, down from 6.5 million a year ago.

“People should not get used to numbers like the one we saw this month,” said Martha Gimbel, director of economic research at the jobs site Indeed. “Eventually, job growth is going to start slowing down. When that happens, we shouldn’t panic.”